European Union leaders consider President Reuven Rivlin one of the only liberal voices within the Israeli right-wing camp. 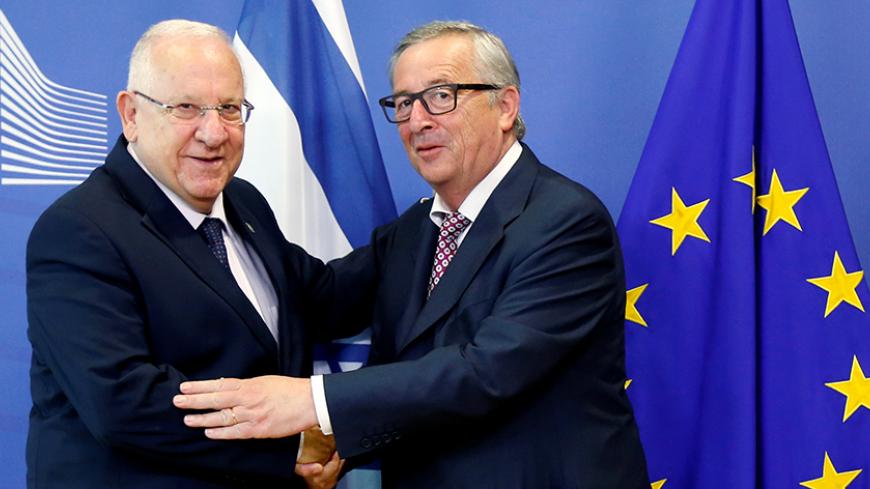 BRUSSELS — European leaders had high hopes for Israeli President Reuven Rivlin’s June 20-23 visit to Brussels, and none of them tried to hide it. Almost all of the meetings stretched longer than scheduled, and the welcoming phrases were always warm and personal. ''I know that today we have here not only the president of Israel, but also our good friend — and our discussions today showed that it is true,'' said European Council President Donald Tusk after his encounter with Rivlin.

Indeed, the scope of Rivlin's visit was practically unprecedented. Crisscrossing the Belgian capital, Rivlin met successively with Belgian Prime Minister Charles Michel, Belgian King Philippe, President of the European Council Donald Tusk, NATO Secretary-General Jens Stoltenberg, President of the European Commission Jean-Claude Juncker, and the EU High Commissioner for Foreign Affairs and Security Policy Federica Mogherini. In between, Rivlin was also welcomed at the European Parliament, where he gave an address in Hebrew.

Israeli diplomats noted that even former President Shimon Peres on a formal visit in 2013 was not served with all those European dignitaries. The almost parallel arrival in town of Palestinian President Mahmoud Abbas (who landed on June 22), only amplified the visit's visibility here. But was all this commotion justified?

Rivlin is considered by many in Europe as the last politically sane voice within the Israeli right-wing camp — or at least as the only liberal, open-minded, right-wing senior public figure with some internal political clout. Not only has Europe lost any confidence in Prime Minister Benjamin Netanyahu and his associates, it's starting to lose patience with the Israeli diplomatic machine as well.

Indeed, while some European leaders clinched this week to the Rivlin straw, other European diplomats rejected this perception — lessening the importance of Rivlin within Israeli public discourse. A senior European diplomat told Al-Monitor on condition of anonymity that Rivlin could certainly assist in passing on the European message back home, but insisted that ''at the end of the line, only Netanyahu counts. We all know Netanyahu quite well after all these years; he hasn't changed, and he keeps rejecting any European attempts to dialogue.''

A good example of that was the conclusion text of the EU Foreign Ministers Council meeting in Luxembourg on June 20, where the European foreign ministers embraced the June 3 Paris initiative for convening an international two-state solution conference by the end of the year. Israel was unhappy about the resolution, but the European diplomat argued that Jerusalem could have actually influenced the wording had it chosen the path of dialogue instead of rejectionism and diplomatic pressure. ''Netanyahu offers nothing, not even on the symbolic level,'' said the European diplomat, ''yet he keeps sending us his people with demands to change our language. Instead of dialoguing with us, he sends his people to lobby. Some of the EU member states were not so keen on the final resolution phrasing, thinking that we were putting the carriage [incentives to both sides] before the horses [defining the work plan of the Paris initiative]. But with all that unwelcomed pressure, we decided to adopt the text as it was,'' he said.

Even more so. If any of the European leaders thought that Rivlin would inch a bit closer to the Paris initiative, they were mistaken. His speech at the European Parliament toed the line with Netanyahu's position, with Rivlin stating, “The French initiative suffers from fundamental faults. The attempt to return to negotiations for negotiations’ sake not only does not bring us near the long-awaited solution but rather drags us further away from it.” And so, on this front, as far as the Europeans were concerned, Rivlin didn't exactly deliver.

But Rivlin delivered the goods on another front. Or at least, this was the impression conveyed by his entourage. With both Rivlin and Abbas in Brussels at the same time, the Europeans, very cautiously, proposed to explore the possibility of a Rivlin-Abbas encounter. Rivlin agreed immediately, and his associates started pulling all visible and invisible strings for such a meeting to take place. For Rivlin, it would have been a win-win situation — a mediatized handshake that required no political price from him. As president, he can promise the other side nothing. Yet personally, he can only gain — proof to the world and also at home that the president is a man of peace and reconciliation and that he is the right person at the right time. European Parliament President Martin Schulz seemed surprised at the Israeli enthusiasm. Asked by Al-Monitor if a meeting was in the works, Schultz responded that they have yet to verify if such an encounter would be possible in relation to the two presidents' timetables — a remark to which Rivlin was quick to react to, stating that he will adapt himself to whichever time window that would suit Abbas.

Alas, the Israeli-European pressure bore no fruit, and Abbas turned down the offer. Contrary to Rivlin, Abbas, apparently, has quite a lot to lose. And it might be that he isn't interested anymore in meetings that do not concretely advance the relaunching of negotiations.

With this in mind, perhaps Abbas actually identifies with some of Rivlin's convictions. After his European Parliament speech, Rivlin told me that "in my meetings with the European leaders, I've been trying to explain that the Israeli-Palestinian conflict can be solved only through direct negotiations.''