President Reuven Rivlin has not abandoned his right-wing worldview in expressing a pragmatic and moral position in favor of an Israeli-Palestinian confederation. 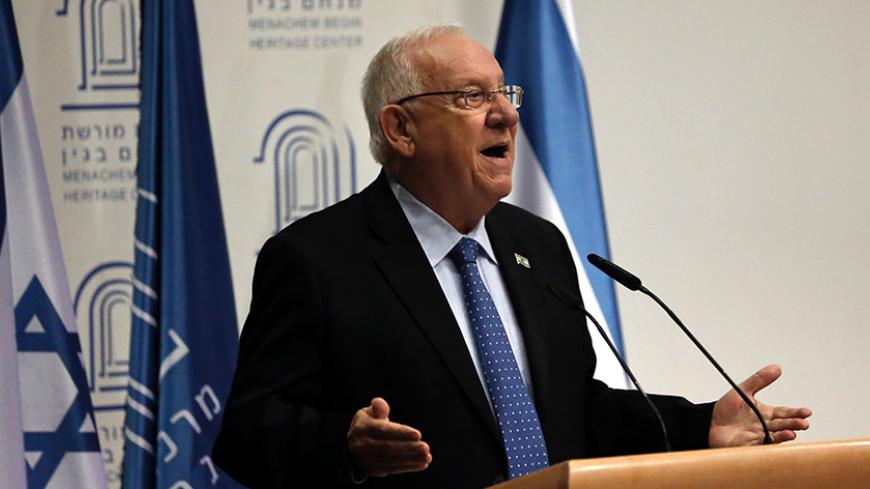 On the eve of the Passover holiday, effusive holiday greetings from a senior Fatah official landed in the inboxes of Israeli peace activists. In the April 21 email, Fatah Central Committee member Mohammed al-Madani hoped, “On this festival of freedom, the Palestinian people will also get to realize their freedom and we will establish our state next to the State of Israel and peace will reign in our region.” Madani, who also heads the Committee for Interaction with Israeli Society, signed off, “And let us say Amen.” Unfortunately, the Israelis who are authorized to say “Amen” to his prayer of peace and to make it a reality are the ones who worship land. Ahead of the Jewish holidays, they usually show their respect for Madani and his friends by imposing a closure on the West Bank and its Palestinian residents.

On April 17, Uri Savir reported for Al-Monitor that Israel has made it clear to King Abdullah II of Jordan that it opposes a proposal calling for a Palestinian-Jordanian confederation whose western boundary would be based on the 1967 border between Jordan and Israel. Meanwhile, the Israeli government is busy planning the 50th anniversary celebrations of the “liberation of Jerusalem” — that is, its capture from Jordanian control in the 1967 war. If it were up to him, Prime Minister Benjamin Netanyahu would have issued a gag order for the interview in which Israeli President Reuven “Ruvi” Rivlin challenged this status quo.

On Channel 20 April 12, Rivlin spoke in favor of an Israeli-Palestinian confederation without referring to a Jordanian component. “When you have two political entities, the Palestinian entity and the Hebrew Zionist one,” said Israel's first citizen, “we may well have to live in a confederation, with each side running its affairs in one way or another, and global issues managed by the system as a whole.”

The president understands that, sadly for him, the vision of his hero, the revisionist Zionist leader Ze’ev Jabotinsky, set out in “Two Banks to the Jordan” is no longer valid:

From the wealth of our land there shall prosper

The Arab, the Christian and the Jew

For our flag is a pure and just one

It will illuminate both sides of my Jordan

Rivlin, the progeny of the right-wing, nationalist Herut movement, is adapting his humanistic views to the grim reality of the Jewish public’s attitude toward such values as democracy, equality and tolerance of minorities. He understands that the beautiful Israel of yore — Israel in its first years — is on a slippery slope, and if no one is found who can stop it, Israel will plummet into an abyss.

Rivlin sees confederacy as an alternative to a binational state, which he regards as an unfeasible solution that would result in an apartheid state and eventually lead to Israel’s division. An announcement by his office in December 2015, on the eve of his departure for a meeting with US President Barack Obama, said that Rivlin proposes the establishment of a Palestinian “entity” in the territories, next to the State of Israel, within the framework of a joint confederation. Of note, Rivlin, although speaking of an “entity,” stands by his opposition to the establishment of a Palestinian state. For him, only Israel and the Israeli army can be sovereign over the land between the Mediterranean Sea and the Jordan River. On this issue, it would seem, he has a big obstacle to overcome.

Rivlin is not one of those politicians who floats trial balloons to make headlines. He grew up in the home of a wise scholar, Yosef Yoel Rivlin. The 10th president does not make do with reading only the news clippings placed on his desk each morning. Rivlin devotes long hours to reading peace plans, among them the regional peace plan promoted by the Israeli Peace Initiative and the Two States, One Homeland plan. The presidential residence is open to Israelis seeking a way through the doors that are slowly closing on the two-state solution. Al-Monitor has learned that Rivlin occasionally leaves his office for discreet meeting places to hear the views of Palestinian experts.

In 2005, as a Likud Knesset member, Rivlin had led a group of legislators demanding that the government of Prime Minister Ariel Sharon remove the roadblock from Area E1, linking Jerusalem and the settlement town of Maale Adumim. He claimed that by refusing to authorize construction of a new neighborhood effectively linking Maaleh Adumim to Jerusalem, “Sharon is dividing Jerusalem.” Rivlin opposed Sharon’s plan to pull out of Gaza in 2005 and evacuate the Jewish Gush Katif settlements, dubbing it “an expulsion of Jews.” On a visit to the Gush Katif museum in Jerusalem on the fourth anniversary of the Gaza disengagement, Rivlin, then Knesset speaker, said, “We must adhere to our belief that the Land of Israel in its entirety is ours and that the expulsion from Gush Katif did not provide any advantage.”

The move into the president’s residence did not alter Rivlin's belief in the right of Jews to settle every corner of the Land of Israel. Almost a year ago, in February 2015, Rivlin took part in the inauguration of the Hebron Heritage Museum. On the occasion, he said, “There's no way to go back down the path through which our people's consciousness was created without going to Hebron.” Indeed, Rivlin’s confederation plan is designed to enable continued Jewish settlement on all the land between the Jordan and the Mediterranean. There is as yet no indication of whether he has formulated a position on the political status of the Palestinian residents of the West Bank and their right to settle in Jaffa.

The man who used to start every radio interview with the words “Good morning/Good evening from Jerusalem” no longer appears repelled by proposals to give up Israeli control over peripheral Palestinian neighborhoods of East Jerusalem, such as the Shuafat refugee camp. He takes seriously a blueprint that would turn the Temple Mount from a regional problem into a regional solution, as proposed in some of the peace initiatives he has studied. Perhaps it is maturity, or perhaps the move from the Knesset to the presidency that has transformed him. As US President Gerald Ford said in 1974 to Prime Minister Yitzhak Rabin in explaining why he had violated a promise he had made while in Congress to promote the move of the US Embassy from Tel Aviv to Jerusalem, “In the Oval Office you view things differently than from the House of Representatives.”