The racial profiling Trump so admires doesn't even work in Israel

State-sanctioned racial profiling in Israel means that Arab citizens are subject to detention, body and property searches at any time, despite research showing such methods cause more harm than good. 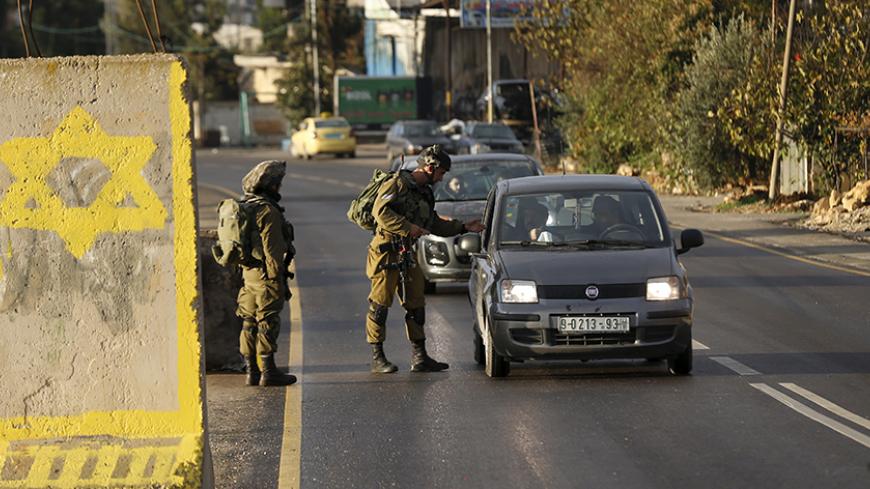 Israeli soldiers check Palestinian cars at a checkpoint at the entrance to the village of Halhul, near the West Bank city of Hebron, Dec. 1, 2015. - REUTERS/Baz Ratner

Leading Republican presidential candidate Donald Trump was right when he said a week after the massacre in Orlando that Israel profiles Muslims as a counterterrorism tool.

I recently had the opportunity to personally experience the selection process between Jewish and Arab citizens. On my way back late at night from a Ramadan visit to Ramallah, my taxi was stopped for a routine inspection at an Israeli checkpoint. I had often passed through the checkpoint in my own car, was greeted by the guard and waved on. This time, a quick glance at the driver’s face and a peek at his identity card were enough to send us to the lane reserved for special inspections. The ID card was blue, just like mine: Israeli-issued.

But alas, the name, Abed, gave the driver away. So did his address, an Arab neighborhood of Jerusalem. It would seem that the security guards had not heard the prime minister’s announcement earlier this month that the city is united. While waiting for the examination to end, after putting our things through an x-ray machine, we were joined by a woman and two young men who appeared to be her sons. They were on their way back to the town of Ramle, in the very center of Israel.

“What are you getting so upset about?” one of the young men asked me. “This is nothing. You should come here in the midday hours and see the line straggling through here.”

A guard who overheard the conversation shrugged and said, “What can we do?” with just a hint of apology. “Those are our instructions.”

Yisrael Katz, the minister of transportation and intelligence, doesn’t think there’s any reason to apologize for Jews screening other human beings on grounds of their racial background. He is even proud of it. “The Shin Bet security agency acts according to assessments of certain communities,” the minister told members of the foreign press in response to Trump’s remarks. “Anyone who thinks that you can ignore the need to locate and prevent threats for the benefit of the entire population, including the Arab one, is simply wrong.”

Does screening really serve the fight against terror, or do the humiliation and discrimination sow hatred and alienation that generate fury and violence? Can Israel, as Trump said, serve as a success story of the racial screening model, or is the conservative millionaire perhaps like a doctor who prescribes medication that worsens the condition of his patient?

One answer can be found in the report of the Or Commission that investigated the October 2000 clashes between Israeli security forces and Arab Israeli citizens, in which 13 demonstrators were killed by police fire. “Humiliation during a security check, which has nothing to do with real needs, as well as an offensive attitude in the contacts of Arab citizens with run-of-the-mill Israelis,” warned the commission headed by former Supreme Court Justice Theodore Or, “risk residues of burning affront that will not be easily erased.”

Another answer came from Bernard Harcourt, a law professor at the University of Chicago, in a 2006 paper on the issue of racial profiling. He wrote that he had not found any empirical proof that its usefulness outweighs its contribution to terror attacks.

David Harris, a University of Toledo law professor considered one of the world’s leading authorities on racial screening, holds that the use of racial profiling cannot contribute to maintaining public order, reducing crime and drug dealing or preventing terror attacks. According to Harris, racial and ethnic affiliation are very weak indicators for predicting a person’s behavior and threat level. Among other data, Harris cites statistics according to which the use of racial profiling in the war on drugs and crime in the United States, where the targets are mostly black and Hispanic citizens, did not contribute to a drop in drug offenses, but rather to the social alienation of members of these minority groups. According to Harris, the same is true of the profiling at airports, where the targets are Arabs and Muslims.

These findings are described in a 2007 petition filed by the Association for Civil Rights in Israel (ACRI), demanding that authorities cease using the Arab nationality as a criterion for airport security checks. The petition describes how Arab airport passengers face stereotyping that results in rigorous screening that is very different from the regular security checks that Jewish passengers undergo. The ACRI demanded that the intensity of security screening be determined for all citizens, both Jews and Arabs, according to equal and germane criteria.

A third answer on the profiling issue is indicated in the 2012 decision by the Supreme Court to offer the state a time extension to change its profiling procedures. The justices wrote, “We doubt the use of threat profiles based on inclusive and generalized characteristics and on the passenger’s affiliation with a certain population group as a sole characteristic is legitimate. … Indeed, even though no one has an acquired right to be exempt from an airport security check, he has the right to an equally applied check based on equal and uniform criteria.”

In the ruling handed down in March 2015 (no less than eight years after the petition was first filed), the Supreme Court determined that due to improvements introduced into the inspection process as a result of the court deliberations, the petition should be withdrawn “without a ruling on the fundamental issue of differentiation between citizens during the security check process.”

The ACRI confirms that in recent years, certain changes have been made in the security procedures at Ben Gurion Airport, but Arab passengers still face humiliating treatment, damage to baggage and delays that result in them missing their flights. The report also found that portraying Arab citizens as people who can be detained and body-searched and whose bags can be rifled through at any time and under any circumstances contributes to animosity toward Arab citizens and even encourages acts of violence and racism against them by Jews.

If the state treats all its Arab citizens as suspects, and if it is allowed to treat them in a racist manner, what's to stop the rank and file from labeling them, excluding them and abusing them, all in the name of security?