Using military service as a prerequisite for certain jobs and other societal benefits amounts to discrimination against those unable to serve, such as Israel's Arab citizens, writes Jillian Kestler-D'Amours. 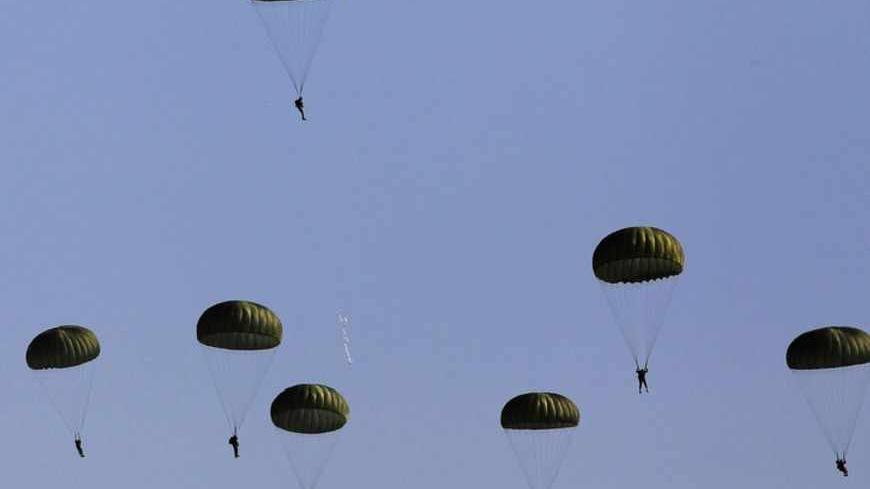 Israeli paratroopers take part in a military exercise at the Palmachim air force base near Tel Aviv April 29, 2013. - REUTERS/Amir Cohen

JERUSALEM — A government move to provide jobs in Israel’s high-tech industry to ultra-Orthodox Jews who haven’t served in the military has raised pointed criticism that Israel is conditioning basic rights on fulfilling army service, and unfairly discriminating against citizens who are exempt from the military.

“Military service is kind of a tool that is being used more and more in order to exclude the Arabs, because they don’t do military service,” explained Sawsan Zaher, director of the Economic, Social and Cultural Rights Department at Adalah, the Legal Center for Arab Minority Rights in Israel.

“They must do an individual check to see whether the applicant is suitable for the job or not. Putting an arbitrary [military requirement is] saying all Arabs are not welcome to even apply to this job,” Zaher told Al-Monitor.

Last month, Israeli Economy and Trade Minister Naftali Bennett, leader of the right-wing Jewish Home party, said during a conference of the Israeli Union of Advanced Industries: “We'll see a significant rise in the coming 10 months in high-tech employment rates because of the integration of haredim (ultra-Orthodox) who will not have to enlist in the [army] in order to work.”

Military service is mandatory for Jewish-Israelis — men serve a compulsory three-year term, while women join for two years — and the country’s Druze and Circassian minorities. Palestinian citizens are exempt from serving in the army, and largely refuse to join.

Last year, the Israeli government canceled a law that had, until then, exempted ultra-Orthodox Jewish men from military service. A large proportion of ultra-Orthodox men do not work, and instead focus their time on studying the Torah, or Jewish law, while receiving government subsidies.

The community’s exemption had prompted heated debates within Israeli society, with secular Jews arguing that the ultra-Orthodox must equally “share the burden.” To date, there has been no final decision on how, or how many of, the ultra-Orthodox will be drafted.

It is illegal in Israel to use military service as criteria for disqualifying people for jobs or other basic rights. Still, human rights groups say that people who haven’t been in the army — mainly Palestinian citizens of Israel, who number 1.66 million and make up just over 20 percent of the total Israeli population — won’t be hired in numerous fields.

“People take it into consideration even indirectly. What the applicant did in his military service: even if it’s not formally asked, they do consider it,” Zaher, who sent a letter to Minister Bennett urging him to also drop the military requirement for Palestinians to get jobs in the high tech industry, explained.

In 2009, over 130 Palestinian citizens had their jobs threatened after the Israel Railway Co. (IRC) concluded that only individuals who had served in the military could be hired as railway guards. A year later, after two employees filed a lawsuit against the company for discrimination, the IRC withdrew the hiring change.

“Setting military service as a work requirement for positions that are entirely civilian in nature, where military experience has no bearing on the position, is indirect discrimination, because the majority of Arab citizens in the country do not perform military service under the law,” the District Labor Court ruled in the case.

In 2011, Palestinians held only 7.5% of state-service positions in Israel, and are also under-represented in local municipalities. According to Adalah, while Palestinians constitute 15% of the population in the city of Nazareth Illit, they hold only 5.1% of municipal jobs, and are wholly absent from certain departments.

The benefits that come with serving in the Israeli military extend far beyond employment.

The Absorption of Discharged Soldiers Law, for instance, provides housing and educational grants to former soldiers. Under the law, “a married couple in a poor socioeconomic situation, each of whom has completed full military service, receives NIS 124,500 (about $30,000) more toward their home mortgage,” Adalah found in its 2011 “Inequality Report.”

In 2010, Israel announced it would provide rent subsidies and land allocations to career soldiers that relocate with their families to the country’s southern Negev region. The army aims to build a new city, named Bahadim, to relocate most of its training bases to the Negev by 2014. Housing for soldiers will also be provided at cheaper prices in the new city.

The government has also proposed granting bigger budgets to high schools that draft higher numbers of students to elite army units, while Palestinians have accused Israeli universities of giving preference to former soldiers, or reserve soldiers, when it comes to allocating scholarships and dorm rooms.

“It’s the ultimate citizenship duty. That means that any other contribution you give society, and at every other phase of life, you’ll never measure up to military service. That’s the ultimate contribution,” said Sahar Vardi, a member of New Profile, a feminist group that works to de-militarize Israeli society.

Vardi, who refused to join the Israeli army in 2008, told Al-Monitor that the military service barometer is not only promoted by state policies, but is also a social and emotional construct.

“You can’t blame only the state. It really is people’s emotions: ‘I’d rather [hire] someone who also served because I did,’” she said. She added, however, that she feels a shift in attitudes toward compulsory military service in Israel. There are more young people opting out, and this could force employers to hire people who haven’t served in the army.

Recently, the US State Department found that Israel practiced “institutional discrimination” against its Palestinian citizens, especially in access to housing and jobs.

“Citizens who do not perform military service enjoy fewer societal and economic benefits and are sometimes discriminated against in hiring practices. Citizens generally were ineligible to work in companies with defense contracts or in security-related fields if they had not served in the military,” the Department stated in a report on Israel’s human rights record.

According to Jafar Farah, head of Mossawa, an advocacy center for Palestinian citizens, almost all Palestinians feel excluded in Israel, and this sense of alienation extends even to those that serve in the military, like Druze men.

“There is discrimination in allocation of resources: land and housing and funding for schools and local councils. Their socio-economic situation is almost the same as other villages where people there do not serve in the army. If you serve in the army, still the fact that you come from Arab origin will put you in discriminatory status. You will be second class,” Farah told Al-Monitor.