Six high-tech startups by ultra-Orthodox Israelis, some of them women, were selected by the Kamatech accelerator project for mentorship and funding assistance. 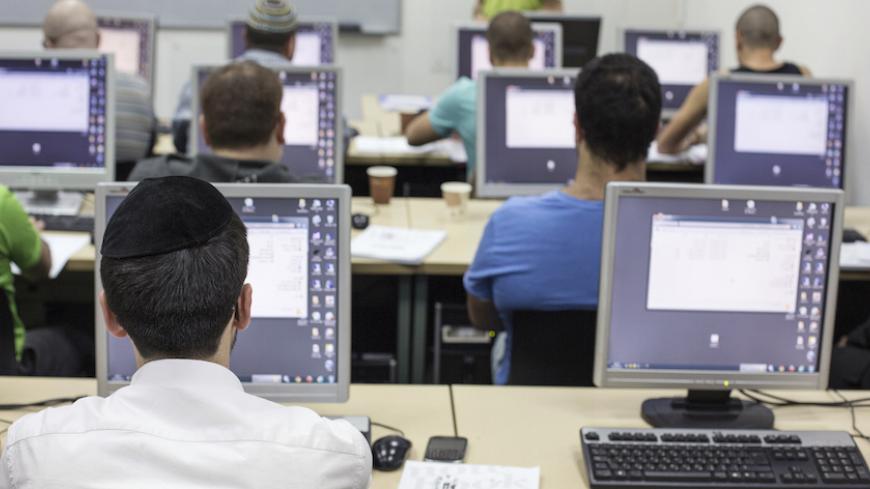 An ultra-Orthodox man attends a computer course at a technical college in Jerusalem, Oct. 16, 2013. - REUTERS/Baz Ratner

The Kamatech project announced on the evening of April 20 the winners of its competition at a glamorous celebration attended by former President Shimon Peres, startup guru Yossi Vardi and other high-tech veterans. An accelerator for ultra-Orthodox high-tech ventures, the success of Kamatech is a sign that something is changing in Israel’s ultra-Orthodox society.

One of the great rifts in the country is between secular society, which sees itself as carrying the weight of sustaining the state through work and military service, and ultra-Orthodox society, most of whose streams believe that they contribute to the state through Torah study. Many married ultra-Orthodox men study at rabbinical colleges (yeshivas) and receive a stipend, while the women bear the burden of earning a livelihood. There are some who do work for a living, but for the most part, ultra-Orthodox men are still not integrated in the job market.

But progress, technology and life outside their community have nonetheless seeped into the margins of the ultra-Orthodox centers over the past few years. Bnei Brak, the overwhelmingly ultra-Orthodox city adjacent to Tel Aviv, is slowly becoming the ultra-Orthodox Silicon Valley. Many of those who made it into the last round of the Kamatech project live there.

Six high-tech ventures by ultra-Orthodox submitters were chosen for participation in the project. Each of them will benefit from four months of close mentorship at leading Israeli high-tech firms, legal advice and accounting services. At the end of the process they can present their vision to investors in Tel Aviv, London or New York for support to fuel their ventures.

“Until age 22 we studied at a yeshiva,” said Ariel Klikstein, a 31-year-old from Bnei Brak who developed one of six winning startups with his partner Yoni Luksenberg. Like most ultra-Orthodox Jews, the two of them married very young, in their early 20s. “We are autodidacts and we taught ourselves everything from guidebooks and various courses,” Klikstein told Al-Monitor.

“We created a website-building company that advanced a lot in the field and succeeded, but with time we discovered that building websites is hard work that doesn’t pay off. So we developed a work environment and a product that enables designers and website developers to save half the time of building a website, and make the compensation more rewarding. We sold the company and focused on the startup,” he added.

Their startup company, Pojo, has about 1,000 customers in Israel and several hundred abroad, but of course this isn’t enough. The two hope that their participation in the accelerator will send their company further.

Among the other finalists is a venture called EnglishOn, which turns existing websites into a space for practicing the English language. The two founders, Aor Sharf and Michael Mesian, met at an entrepreneurial conference. Educational initiatives are important to both of them, but that’s where their similarities end. Mesian, 46, is a born-again ultra-Orthodox resident of Bnei Brak who spent years in religious study. Sharf, 26, is a secular graduate of the 8200 intelligence unit of the Israel Defense Forces, considered the ultimate incubator for Israeli high tech.

The difficulties of entrepreneurs who have followed the ultra-Orthodox track begin with education. The core curriculum of ultra-Orthodox education is limited, focusing on sacred texts and is sparse on mathematics, physics, English and science. Many of those who seek to integrate into the job market have to close the knowledge gaps by themselves. They also have to constantly deal with the ultra-Orthodox stereotypes held by many in secular society such as that the ultra-Orthodox abstain from work entirely or that they're not allowed to surf the Internet. Ultra-Orthodox entrepreneur Moshe Friedman created the Kamatech project to address these issues.

Friedman was born to a family of distinguished religious lineage. His great-great grandfather, Rabbi Yosef Hayim Zonnenfeld, was once the chief rabbi of Jerusalem and is considered one of the founders of ultra-Orthodoxy in Israel. Naturally, Friedman was destined for a career as a great rabbi and head of a yeshiva. “At 30 years old, I decided that despite my love of Torah study, I'm also interested in what’s going on in the outside world,” Friedman told Al-Monitor. “I started to study English by myself, because I understood that I need the language to understand what’s going on in the world. I wanted to be part of the startup nation and I founded a startup in the field of video recording, which I loved.”

His peers found it difficult to accept his decision, but to his surprise, secular Israelis also turned a cold shoulder. “An entrepreneur needs support from his environment, but all the time I got negative reactions like ‘You didn’t serve in the army.’ Investors told me, ‘I don’t invest in the ultra-Orthodox. It’s a risk, maybe the rabbi won’t allow it. Maybe you’ll donate it all to charity. I don’t know how your mind works,’ and so on. I thought that the secular would greet me with cheers because I want to work, but I got a slap in the face.”

At one of the conferences where he presented his product, he bumped into Yossi Vardi. “He told me that he’s been in high tech for 40 years and this is the first time he’s seen an ultra-Orthodox startup. I explained that there are many ultra-Orthodox men and women who want to be a part of it, but their road is blocked.”

Vardi introduced Friedman to Zika Abzuk, who is now the senior manager of business development at Cisco-Israel. She has worked in Israel, the Palestinian Authority and Africa to advance the population through technology. With a sense of mission, the two of them created the Kamatech project only two years ago, based on a similar initiative that Abzuk established in the Arab community in Israel. “We started by establishing a coalition of the 36 biggest companies, including Intel, Google, Amdocs and Cisco, to open their ranks to the ultra-Orthodox and at the same time to prepare the ultra-Orthodox for the industry — to explain how to build a profile on LinkedIn, to write a resume and to behave at a job interview. Today, there are 15,000 ultra-Orthodox who have studied something related to the high-tech industry,” she said.

When they discovered that there are quite a few ultra-Orthodox entrepreneurs, they developed the accelerator along with Hebrew University professor Amnon Shashua, one of the founders of the successful high-tech company Mobileye. “The first year of the accelerator, we had 20 applications from startups,” the two said enthusiastically. “The second year, 224 startups applied, all of them ultra-Orthodox!”

Among the six chosen ventures, two of them are led by ultra-Orthodox women. Another venture that reached the final round but didn’t cross the finish line belongs to Meirav Hadad, an ultra-Orthodox entrepreneur who specializes in artificial intelligence. She is also married and a mother. The patent she registered is meant to be used for the military industry and for computer games. “I was a bit disappointed that I wasn’t chosen, but it may be that they got the impression that I’m at a relatively advanced stage compared to the other initiatives,” she said. “It’s clear that I’ll find an investor. I believe in divine providence and the holy one, blessed be, he will help us.”

by Murielle KASPRZAK and Joseph SCHMID | AFP | May 26, 2022
END_OF_DOCUMENT_TOKEN_TO_BE_REPLACED