Is the West about to repeat its mistakes in Libya?

During a recent meeting in Vienna, world powers supported the newly created Presidential Guard of Libya, not taking into account who this force is made up of — mainly militias that have committed crimes after the Libyan revolution. 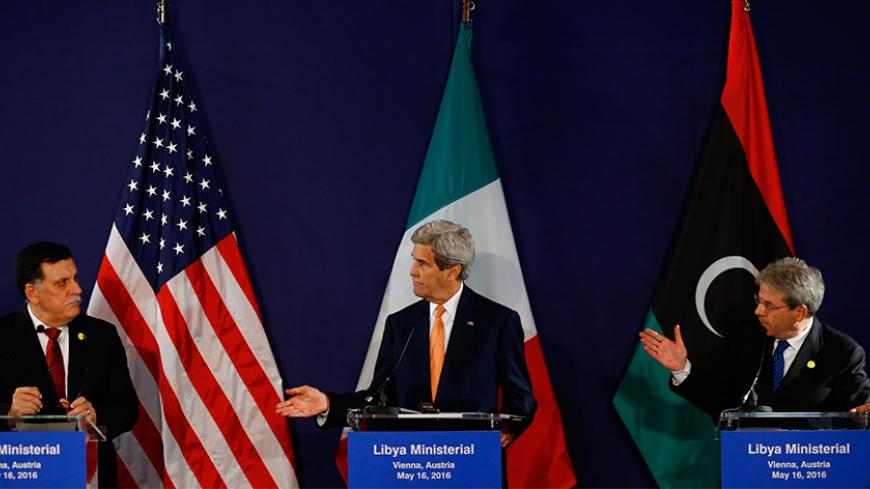 Is the international community about to help Libya fix itself and gain stability or will it repeat the same errors of judgment and commit more mistakes than it did five years ago? Those mistakes helped make Libya become more chaotic, more ungovernable and more destabilizing to its immediate and regional neighbors.

On June 7, Britain circulated a draft resolution at the United Nations to authorize European naval forces to intercept ships suspected of smuggling arms to the Islamic State (IS) in Libya. This appears to be counter to what was agreed to in a May 16 Vienna meeting in which major powers promised to help Libya’s Government of National Accord (GNA) arm itself to confront IS. However, the latest draft resolution aims to tighten the noose around IS while calling for the easing of the arms embargo against the GNA.

After the May ministerial meeting, the United States, Russia, Italy, Germany and Libya’s neighboring countries, along with at least three regional organizations including the Arab League, European Union and the United Nations, agreed to lend further support to Libya’s fragile government and to translate this political support into on-the-ground material assistance.

However, careful reading of the meeting’s adopted final communique reveals that the international community is about to blunder again in the North African country, probably repeating some of its worst mistakes committed five years ago. In February 2011, leading world powers, including France and the United Kingdom, rushed to help what they called the Libyan revolution to topple Moammar Gadhafi, only to send the country into chaos and lawlessness. They supplied arms and training to rebel forces without any real concern about where such weapons could end up and who was being trained.

The communique highlights two issues of critical importance: the partial lifting of the United Nations arms embargo imposed on Libya in March 2011, and the granting of some legitimacy to the recently created Presidential Guard. This legitimacy can be granted by recognizing the Presidential Guard as legitimate militia-free, disciplined armed forces under the state control as claimed by the GNA, which created it just a few days before presenting the guard as such in Vienna.

Without any rigorous checking or proper mechanisms in place, those who met in Vienna declared their support for the Presidential Guard, stressing their readiness to “respond to the Libyan government’s requests for training and equipping the Presidential Guard and vetted forces from throughout Libya.”

Such a step will only complicate the military and political situation in Libya and push the various parties into further conflict, since neither side accepts the other as a legitimate legal army under government control. Gen. Khalifa Hifter does not recognize the newly created Presidential Guard as a legal Libyan army worth arming and training, and vice versa.

Which armed group is legitimately called a Libyan army is a big issue in Libya, since such categorization mean legal status and the ability to train and purchase arms openly. The Libyan Armed Forces, under the leadership of Hifter, was recognized as such by the only elected legislature in the country, namely the Tobruk-based parliament. Over the last two years, the Libyan Armed Forces has been battling terror groups, including IS and Ansar al-Sharia, in Benghazi. It finally liberated much of the embattled city earlier this year, enabling locals to return to their homes and businesses.

Before the GNA was created, Libya’s internationally recognized government repeatedly asked for the lifting of the arms embargo to enable the government to buy arms in legal manners — but to no avail. Recognizing the GNA as a legitimate government of Libya should not mean anything before it includes the armed forces. Hifter does not accept the GNA as a legal government in Libya because it did not gain the confidence of the parliament, as required by the Libyan Political Agreement that was brokered by the UN and signed in December.

Arming any group that declares loyalty to the GNA — even if recognized by the international community as such — does not make it legitimate in the eyes of major players on the ground, including Hifter and Tripoli’s Revolutionary Brigades, for instance. The Presidential Guard is composed of armed militias of mixed loyalties drawing mainly on the city-state of Misrata’s armed and powerful militias. Whether or not the Presidential Guard has fought IS does not mean it should be seen as the focal point for a future Libyan army, since many of its members are implicated in abuses and crimes including the mass murder of civilians. Attempts to integrate them and other militias into a state-controlled armed forces have so far failed, and ordinary Libyans see them as an illegal militia.

Seeking training for such militias just because they declared loyalty to the GNA does not make them an army, nor will it lead to discipline and professionalism required in any professional state army. Previous attempts to train such individuals proved to be useless despite the millions of dollars wasted on such programs. Individuals loyal to certain militias, which protect them, will find it difficult to accept being integrated into a legal and accountable state body in which they can be held responsible for their actions.

It is only a matter of time before the UN votes to partially lift the arms embargo on the newly created Presidential Guard. This will automatically lead to renewed conflict because Hifter and his forces — which include a large number of Libya’s former professional army — will consider that to be against them despite the success they have scored against terror groups in Benghazi.

The West, and particularly European Union countries, want the GNA to at least curb, if not stop, the flow of immigrants from Libya to the southern EU shores. To do that, they have promised at the ministerial meeting in Vienna to train Libya’s coast guard. But, again, training the so-called Libyan coast guard is no more than old militias being recycled through the GNA to convince major powers that they are indeed under state command.

In 2011, the West rushed to help destroy the former regime in the tribally divided country without any workable plan to restabilize the country afterward, the result of which has been chaos and conflicts across Libya ever since. The West invested heavily — at least politically — in the so-called Libyan revolution, naively believing that once Gadhafi was toppled, the Libyans would be able to sit together and reconcile their differences and move forward. This time, the West is about to repeat its errors by recognizing old militias as a new army, giving it legitimacy and recognition.