The United States is boosting its commitment to the new coalition government in Libya. 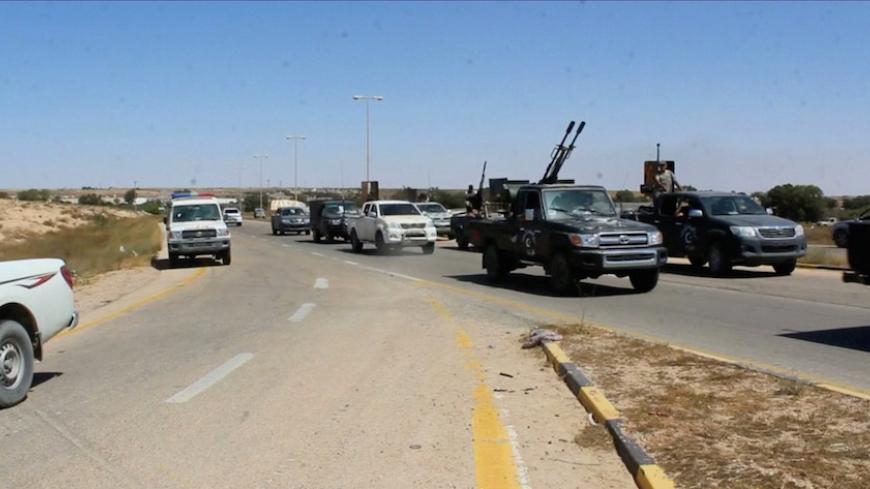 Forces aligned with Libya's new unity government are seen on the road as they advance on the eastern and southern outskirts of the Islamic State stronghold of Sirte, in this still image taken from video on June 9, 2016. - REUTERS TV

The Obama administration is throwing its weight behind Libya’s new UN-backed Government of National Accord (GNA), laying out a $56 million aid plan for the coming months.

The State Department plans to reallocate $35 million in current and prior year funding to help the political transition in Tripoli, special envoy for Libya Jonathan Winer told the Senate Foreign Relations Committee at a June 15 hearing. That includes $4 million for a United Nations-led Stabilization Facility, announced in April, to repair public infrastructure such as hospitals and water facilities.

The proposal would require moving around money that has already been approved by Congress. Some of the funding, however, would require a green light from lawmakers, a State Department official told Al-Monitor.

The funds would come on top of the State Department’s $20.5 million bilateral aid request for the fiscal year that starts Oct. 1. That would bring the total US contribution for the coming year to $55.5 million.

“Our strategic interest in Libya is to support a unified, accountable government that meets the economic and security needs of the Libyan people,” Winer told senators. “At the center of our policy has been support for the creation of the GNA as a unifying bridge to help Libyans move beyond the damaging period of political competition … and fragmentation until the country adopts a new constitution and a long-term government.”

Winer went on to press the Libyan factions in Tripoli and the country’s east to get behind the GNA, which was endorsed by the UN Security Council in December. Without reconciliation and the resumption of oil exploitation (down from 1.5 million barrels a day to 400,000), Winer said, the country could be broke within two years.

Winer received a warm reception on Capitol Hill, even as bipartisan doubts linger about the international community’s ability to bring warring factions together and defeat the Islamic State (IS) and other Islamist groups in Libya. Many Republicans opposed President Barack Obama’s decision to intervene in the 2011 uprising against Moammar Gadhafi, and GOP presidential candidate Donald Trump has made it a centerpiece of his attacks on his rival Hillary Clinton’s record as secretary of state — although he has also said in the past that he supported the NATO-backed campaign.

“It still appears to me that we have a really light touch — a very, very light touch — in a country that … could in fact breed problems far greater than Syria,” said panel chairman Bob Corker, R-Tenn. “It still doesn’t appear to me that we’ve come together around something that has a sense of urgency or seriousness to it relative to the negativity that can occur if Libya fails.”

The top Democrat on the panel hammered home the need for unity, without which the pressure for rival outside interventions will only grow.

“The GNA itself has not requested foreign intervention. And while we can provide training to GNA-controlled units, we cannot fight this fight for them,” said Sen. Ben Cardin, D-Md. “If and when the US decides to give military equipment and training to Libyan forces, it must be with the full cognizance of who we’re giving support to and the potential for that support later to be turned against the United States.”

The United States has stationed a handful of special forces troops in the country to help organize the fight against IS. And Secretary of State John Kerry said in May that he was ready to look at exemptions to the international arms embargo against the country.

Sen. Robert Menendez, D-N.J., raised concerns that some US allies — notably Turkey, the United Arab Emirates, Qatar and Egypt — have supported an array of actors in Libya. He questioned the wisdom of lifting the embargo under those circumstances.

“How can the [Obama] administration ensure that its allies are abiding by international law and not undermining the unity government?” Menendez asked. “And how can the United States ensure that the GNA is strong enough to control any arms that are supplied?”

Winer acknowledged that ensuring such an outcome would be a “shared responsibility” between Libya and potential arms providers, including the United States.