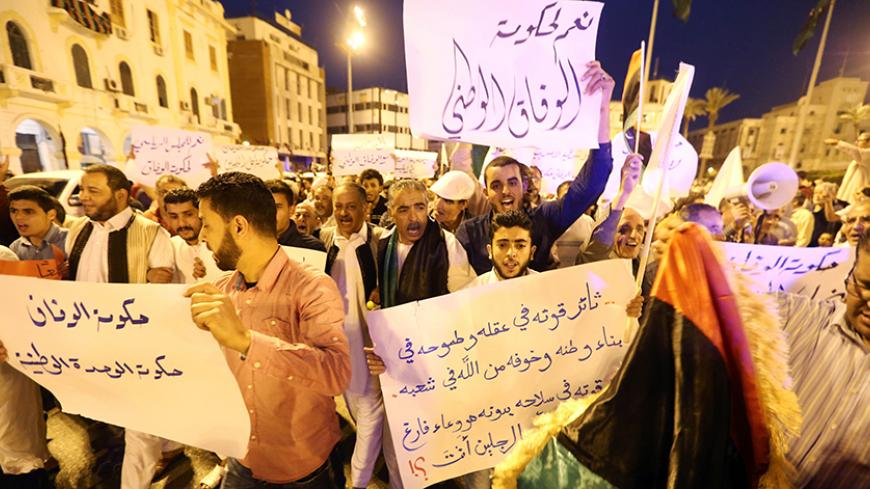 Pro-UN-backed government protesters hold placards and shout slogans during a demonstration calling on a rival administration to depart in the Libyan capital Tripoli, April 1, 2016.

The United States is back in Libya to kill terrorists after deposing a dictator.

The lesson here, the country’s envoy to Washington warns, is that focusing on narrow goals will bring neither stability to the region nor security to the West.

“We know that Daesh [Islamic State] is there because of the chaos,” not the other way around, Charge d’affaires Wafa Bugaighis told Al-Monitor in a late June interview at her Watergate office. “You need to treat the cause. Otherwise, you will have terrorist groups multiplying by different names and agendas.”

Bugaighis has been trumpeting that message to US decision-makers for the past year and a half, first as an employee of the Tobruk-based House of Representatives and now with the newly minted Government of National Accord (GNA). She took her post in December 2014, the same year her cousin, human rights activist Salwa Bugaighis, was murdered in her Benghazi home on the day of Libya’s general elections.

Bugaighis is hopeful that the chaos since Moammar Gadhafi’s fall may finally be subsiding following the international recognition of the GNA earlier this year. Now unity is needed in Libya itself, where a number of warlords and politicians have so far refused to get on board.

"Libya needs a united government, but everybody's concerns and worries should be addressed,” she said. “Only through this can we reach real consensus and real accord."

In a sign that the Obama administration is optimistic, special envoy Jonathan Winer in June unveiled a $56 million plan to support a political transition over the coming months. Much of that money had been previously earmarked but could not be spent while the country was in chaos.

While Bugaighis wants Washington to keep the pressure on politicians to join the GNA, she’s also here to explain the “complicated dynamics on the ground” that demand diplomatic finesse. She opposes sanctions against hold-outs, for example, out of concerns they could backfire in a country awash with weapons.

“In Libya we have an issue that needs reconciliation and needs consensus and needs compromises,” she told Al-Monitor. “Sanctions are not effective at all in this matter, honestly.”

Bugaighis preaches the same kind of strategic patience when it comes to dealing with the Islamic State, which established a stronghold in the central coastal town of Sirte in early 2015.

The Obama administration has launched several airstrikes against IS targets in Libya and has deployed small groups of special forces operatives to help take back Sirte. Government-backed forces launched an offensive in May and finished taking the city back in July.

Despite battleground successes, lawmakers on Capitol Hill remain critical of the US mission. Many Republicans have long accused the Obama administration — including Democratic presidential candidate Hillary Clinton, then the secretary of state — of helping depose Gadhafi in 2011 without a plan for the day after.

“It still appears to me that we have a really light touch,” Senate Foreign Relations Chairman Bob Corker, R-Tenn., said at a June 15 hearing on US policy in Libya. “It still doesn’t appear to me that we’ve come together around [a policy] that has the sense of urgency or seriousness to it relative to the negativity that could occur if Libya fails.”

But Bugaighis cautions against overestimating US influence.

“It’s complicated," she told Al-Monitor. "To just say there is a light touch, I don’t know if that’s accurate. I think the US administration has been very sensible about Libyan sensitivities.”

Top US officials have acknowledged the trade-offs between military strikes to eliminate immediate terrorist threats and the longer term work of helping rebuild Libya. The US Director of National Intelligence James Clapper told Congress in February, faces a “dilemma … in terms of a more robust military intervention in Libya, and the potential jeopardy that imposes to a very fragile evolving political process.”

Bugaighis recalled that in the heady days after Gadhafi was deposed, the US-backed National Transitional Council had little interest in retaining a strong Western presence in a country scarred by colonialism.

“In general, Libyans are sensitive to direct international interventions in anything,” she said. "When the Americans or Europeans wanted to stay and do more, they were told ‘Thank you so much, you helped us get rid of the dictator and now we can take care of our own issues.’"

"They left us alone for some time," she concedes, "and things got chaotic."

As rival factions took up arms, outside players backed opposing camps, making the situation worse. Now the world is firmly behind the GNA, says Bugaighis, who insists she’s not worried about reports that Libyans such as anti-Islamist strongman Khalifa Hifter has been traveling to Egypt and Russia.

“I feel the administration, the White House, the Congress are on board with the Libyan issues,” Bugaighis said. “So you can go and lobby as much as you want, but what you will achieve is probably nothing.”

The embassy’s lobbying priorities include increased counterterrorism assistance, such as beefed-up information sharing, humanitarian aid, arms trade monitoring and border control. While Libya gets a bad rap as a source of instability in North Africa, Bugaighis points out that the country’s neighbors also have porous borders that help fuel the chaos in her country.

“You need to get rid of all of these phenomenas to have a stable country,” she said. “You need to do it all as a package.”

As for talk of lifting the international arms embargo on Libya and training and equiping a national military force, Bugaighis said the government isn’t there yet.

“There will be proper vetting for the national forces and [the GNA is] hoping for more reconciliation to unite the forces against [IS]. We don’t see haste in this,” she said.

She said Libya has learned the lessons of the failed attempt to create a General Purpose Force in 2013-14. Instead of sending recruits throughout Europe, she said, future training would have to be conducted inside Libya or in neighboring countries.

In a final nod to the long road ahead, Bugaighis acknowledged that the GNA isn’t currently seeking to lift the freeze on Gadhafi’s assets in the United States. The Treasury Department froze almost $30 billion of the dictator’s money in US banks during the 2011 uprising, money that could provide a crucial lifeline amid crumbling oil revenues.

“It doesn’t mean we don’t want it. But you don’t want to spend it now,” Bugaighis said. “In transitional periods, sometimes it’s a safe measure to have it frozen.”