The results of municipal elections in Lebanon and the persistence of protesters against government corruption in Iraq may point to a shift in the two countries' traditional sectarian-based politics. 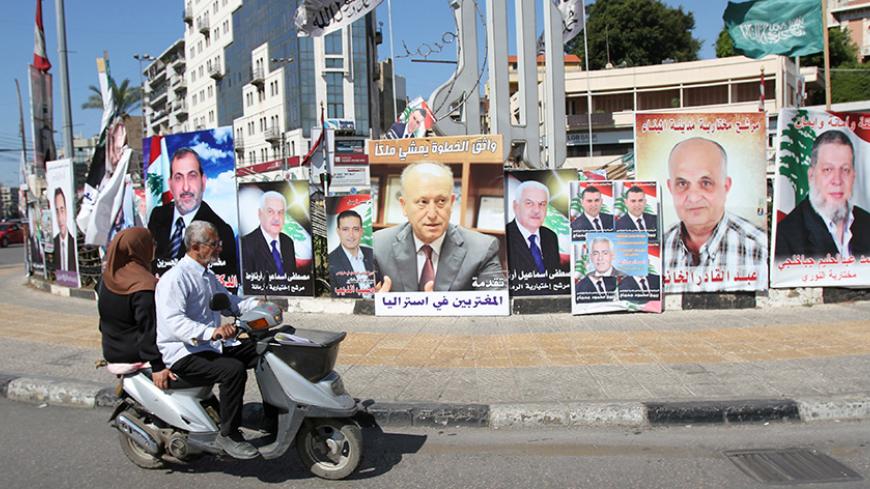 A poster depicting Sunni politician Ashraf Rifi (C) is seen among posters of Lebanese candidates that were running in Tripoli's municipal and mayoral elections, Lebanon, May 30, 2016. - REUTERS/Omar Ibrahim

The disaffected have expressed their discontent in recent municipal polls in Lebanon and in the streets of Iraq, two countries plagued by sectarianism and lingering threats of terrorism. Dominated by partisan politics, both have witnessed the rise of a cross-sectarian social movement critical of the countries' aging and out-of-touch kleptocrats. In Lebanon, municipal elections in May registered a decline in support for traditional parties, while in Iraq, protests denouncing rampant corruption in government have shaken the country. Is there hope for a new, political third way in the Levant?

Lebanon wrapped up the final round of municipal elections on May 29. In Tripoli, the capital of the north, a list headed by Ashraf Rifi, a former Future Movement-affiliated justice minister, won the majority of the city’s seats against a coalition list backed by Sunni heavyweights, including billionaires and former Prime Ministers Najib Mikati and Saad Hariri, billionaire Mohammad Safadi and the powerful Karami family.

“The elections have clearly shown the displeasure of the Lebanese electorate with the policies of local factions,” Paul Khalifeh, an analyst and editor of Magazine, a political publication in French, told Al-Monitor. “In several regions across the country, party supporters have refused to follow their leaders’ voting instructions. As an example, the Beirut Madinati list, which was comprised of independents with limited resources, was able to gain 40% of the Beirut electoral vote against a list supported by 11 Lebanese factions. A similar trend was observed in Christian and Druze areas, where parties appeared to be disconnected from their popular base.”

A similar rebellion occurred in Shiite areas, bastions of Hezbollah and Amal, which have also been disaffected, though to a lesser extent, than other regions. Solid support for Hezbollah translated into victory for the party in its traditional areas, such as the Baalbek-Hermel region, Dahiyeh (in Beirut's southern suburbs) and southern Lebanon. The devil, however, is in the details. Surprisingly, despite Hezbollah’s tight grip on its strongholds and its monopoly on weapons, independent and family lists as well as the Lebanese Communist Party still managed to compete and obtain a fair number of votes, including partial victories in some areas.

According to an article in Now Lebanon, in Baalbek, Hezbollah’s Bekaa Valley stronghold, the civil society list Baalbek Madinati managed to capture approximately 45% of the vote. In the city of Hermel, Hezbollah faced a civil society list appalled by corruption in the city council. One candidate, Hasan Kabout, a Hezbollah supporter, rebelled against the organization and managed to win a seat as an independent.

In south Lebanon and Nabatiyeh, the Communist Party and leftist independents garnered an unprecedented number of votes. The communists, according to a May 23 statement issued by the party, managed partial or complete victories in more than 17 municipalities. “Hezbollah has been able to preserve its base, however, there have been cases of rebellion against the party’s orders,” Hezbollah analyst Kassem Kassir told Al-Monitor. Indeed, one of the interesting trends in the electoral results is that despite Hezbollah’s widespread call for followers to cast their votes for the party, many ignored this “takleef sharii” (religious edict), sources close to the organization confirmed.

The general unease that dominated the municipal elections is rooted in the proliferation of environmental and corruption scandals combined with the paralysis of state institutions. The trash scandal triggered protests and left people angered because of the inability of officials to arrive at a sustainable solution. Another scandal involved allegations of illegal internet transmission stations profiting local figures. Meanwhile, Lebanese government institutions continued to be paralyzed by the political factions’ inability to elect a president, now going on two years.

Khalifeh believes that the political class in Lebanon will simply try to cling to power instead of learning lessons from voters' choices in the municipal elections. The recent results will certainly, however, influence parliamentary elections in 2017, with the possible further erosion of the traditional parties’ base in favor of independents.

A similar cross-sectarian upheaval is taking place in Iraq. On March 25, hundreds of Iraqi politicians fled the Green Zone, according to the Independent, as thousands of demonstrators stormed the government quarter in Baghdad, protesting harsh living conditions and corruption. Iraq currently ranks fifth (tied with Libya) on the Corruption Perceptions Index.

“The protesters had had enough of empty promises made by failed politicians,” Luay al-Khatteeb, executive director of the Iraq Energy Institute, told Al-Monitor. “For the 13 years of the post-[Saddam Hussein] period, the $750 billion in revenues that Iraq made has little to show, as public services are bad if not nonexistent, inflation is on the rise, the value of the Iraqi dinar is declining, the government can no longer hire people in the public sector due to declining revenues as a result of low oil prices, and the private sector is crippled because of a legacy of bad regulations and governance.”

The demonstrators are followers of Shiite cleric Muqtada al-Sadr, who fought against the US occupation after 2003.

“Protesters are fed up with poor government services, the electricity cuts and an Iraqi political elite that pretends to represent the people,” Renad Mansour, a researcher at the Carnegie Endowment in Beirut, told Al-Monitor. He also expressed surprise that the demonstrations lasted as long as they have given the war against the Islamic State and that the protesters have been able to shift away from identity politics to consider real local issues.

“We have seen the protests pitting Kurds against Kurds, Shiites against Shiites. Demonstrations have crossed ethnic and religious lines,” Mansour noted.

In Iraq, the crisis has reached a new peak, with the country running out of money due to low oil prices and hydrocarbon sales representing about 90% of Iraq’s export revenues. “I think the stalemate will prevail over the next months, until the military operations in Fallujah and Mosul are over,” Khatteeb said. “No serious reform will be implemented before voting in a new government after the 2018 general elections.”

Current events in Iraq and Lebanon point to possible dramatic changes in the next election cycles for both countries. Change appears to be brewing in the Levant, where sectarian politics is no more a justification for rampant corruption and lack of opportunity, justice and security.

“Political parties cannot claim to be the only representative of the population,” former Lebanese Interior Minister Ziad Baroud told Al-Monitor. “They have to share power with families, civil society and independents from now on. The mood is changing. The silent majority is silent no more.”