Protesters in Lebanon are demanding the new government to formulate a new electoral law they hope will bring independents to power and eliminate the sectarian-based system that has governed the country for decades. 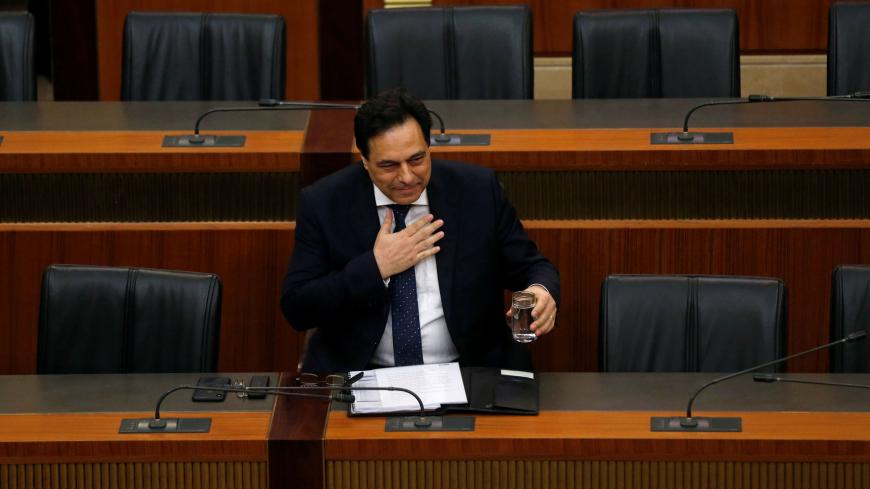 BEIRUT — Following newly minted Prime Minister Hassan Diab’s formation of a new government in Lebanon on Jan. 21 after over three months of street protests, demonstrators have roundly rejected the new Cabinet as insufficiently independent over the past several weeks, pointing out that it continues to be backed by several of the country’s traditional parties.

Amid declarations of “no confidence” in the Cabinet over the last several weeks, many demonstrators have reignited calls for early parliamentary elections, ideally under the auspices of a new, revised electoral law — a key demand of the movement since its inception last year. Demonstrators and groups seeking change have suggested several proposals for such a law since mid-January in hopes of looking beyond the Cabinet and instead striking at the fundamentals of Lebanon’s sect-based party system, which many feel has fueled decades of corruption.

The new Cabinet’s still-unfinalized draft ministerial statement says it intends to make preparations for new elections. But according to experts, creating an equitable election law that achieves the protesters’ goals will be difficult, if not impossible, as no single proposal on the table offers a cure-all solution. Such a law would necessarily have to come from the same parliament that protesters hope to overturn, and new political movements emerging from the protests would also have to overcome additional hurdles such as financing if they hope to pose a threat to Lebanon’s political class at the ballot box.

“This is the only way to have really independent people run for the parliament and actually win,” Jinane Aboumrad, a business owner who was present at a demonstration near Lebanon’s parliament Jan. 21, told Al-Monitor about early elections. “I think this time they will win.”

“Today, one of the major demands of the protesters is a new election because there is a strong feeling in Lebanon that the governing political parties have lost popular support,” Sami Atallah, the executive director of the Lebanese Center for Policy Studies, which has been advocating for improved electoral laws since the 1990s, told Al-Monitor.

On Jan. 31, the Coordination Committee for the Revolution, an activist organization which, despite its name, does not speak for the protest movement as a whole, held a press conference in which it voiced its support for such early elections. Specifically, it endorsed moving away from Lebanon’s current sect-based model of parliamentary representation, observing a proportional allocation of seats based on the percentage of votes garnered by candidates in a district, and lowering the voting age to 18.

“At the present time, these are the demands,” protester Walid Sammouri told Al-Monitor several days before the press conference. “An independent government, far from sectarian and ideological quotas, early parliamentary elections based on proportionality and a single-district Lebanon, and accountability for corruption.”

The proportionality concept Sammouri and the committee both referenced was introduced for the first time in the electoral law passed in 2017, which was then applied during the parliamentary elections in May of the following year. The law did away with the previous winner-take-all system, theoretically giving smaller parties and independent candidates more opportunities to win, and gave the Interior Ministry the sole authority to provide voters with ballots. Yet the system also introduced a preferential voting system, which according to Rabih el-Chaer, who heads the public international law group at the law firm Alem and Associates, introduced another avenue for undemocratic results to emerge.

“It was obvious that it was to privilege certain candidates over others, and this is why you had MPs that won with 70 votes only while others who had thousands of votes lost their seats,” said Chaer, who was an adviser to Ziad Baroud when Baroud was interior minister and was in charge of the election file in 2009. “So it wasn’t a fair game.”

Chaer also told Al-Monitor that as the current law stands, all Lebanese are not represented equally because some districts with the same number of legislators have discrepancies in population density.

Some protesters such as Sammouri have instead voiced support for a system where all of Lebanon is treated as a single district. Such a proposal, which retains the principle of proportionality, was put forward in April 2019 by parliament Speaker Nabih Berri, the head of the Amal Movement. Berri has been a frequent target of Lebanon’s protest movement.

Alain Aoun, a parliamentarian belonging to the Free Patriotic Movement party that backed Diab’s nomination for prime minister in December, told Al-Monitor that this and other proposals remain on the table in parliament.

“There are serious talks about some blocs wanting to change the [electoral] law,” said Aoun, who is a nephew of President Michel Aoun, the party's founder. “We are open to revisit the [current] law to see where any improvements could actually be made to it.”

Nevertheless, Alain Aoun added that he did not believe Lebanon was yet ready to adopt a secular, nonconfessional system of the sort that protesters have demanded. The Interior Ministry could not be reached for comment on any ongoing preparations for early elections under a new law.

Although Chaer claimed that there are advantages to a one-district model, he noted that the proposed measure as it stands now would still leave the door open for Lebanon’s traditional parties to maintain their hold on political power. In December, the Kataeb Party formally proposed holding early elections, but both Chaer and protesters don’t have any illusions that political leaders in parliament would ever willfully draft a law that would see them voted out.

“They will not listen,” aspiring independent parliamentary candidate Adel Arslan told Al-Monitor, referring to the political elite. Arslan is the nephew of Emir Talal Arslan, the head of the Lebanese Democratic Party, a majority-Druze party that was involved in choosing the new Cabinet. Adel, however, said he is preparing to mount an electoral challenge against both his uncle’s party and its rival in the Druze sphere, the Progressive Socialist Party. “Obviously they’ve formed a government without listening to the people, they will not listen to the people when it comes to an electoral law.”

Atallah said passing a new electoral law is only part of the problem facing independent, anti-establishment candidates. Unequal access to media and finances, coupled with vote-buying and clientelism by the traditional parties, mean that smaller political movements will have a difficult time competing with more powerful blocs under any electoral system.

“My fear is that under any law the governing political parties probably can still win,” Atallah said, unless smaller parties can organize a political machine with enough funding and exposure to overcome these hurdles.

Chaer said the ideas that have been put forward by members of the protest movement remain unrealistic due to constraints within Lebanon’s Constitution, which mandates a sectarian balance in parliament and sets the voting age at 21. For him, given these and other limitations, a truly equitable electoral law in Lebanon is a mathematical impossibility.

Atallah, on the other hand, refused to rule anything out.

“Whatever is attainable or realistic is really a function of a certain reality,” Atallah said. “What’s often seen as something unrealistic, it becomes realistic under certain conditions. What the protests did is they shifted that, and what was inconceivable became conceivable.”