With the new electoral law in Lebanon expected to fragment traditional parties' representation in parliament, Lebanese are divided over how the May 6 vote will change the legislature. 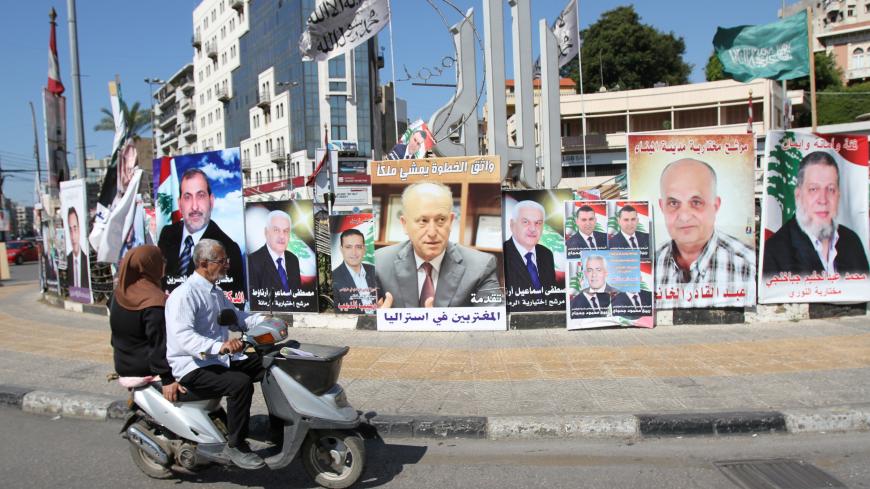 Posters of Lebanese candidates that were running in Tripoli's municipal and mayoral elections line the streets in Tripoli, Lebanon, May 30, 2016. - REUTERS/Omar Ibrahim

Lebanon will hold parliamentary elections on May 6, for the first time in nine years. Lebanese parties are gearing up for the coming popular vote, with many fearing that the new electoral system that is based on proportional representation across 15 electoral districts might fragment their representation. Even Hezbollah seems wary of the parliamentary outcome, with experts believing the group may be facing challenges in several districts.

Political expert Ali Abdallah Fadlallah, who is close to Hezbollah and the author of “Hezbollah: Change of Discourse,” told Al-Monitor that Hezbollah introduced five new candidates, namely Ibrahim Ali Moussawi, Ihab Hamadeh, Anwar Hussein Jomaa, Houssein Jishi and Hussein Zeaiter. “The group did not push for younger figures or women, as it was concerned with the candidates’ experience and because it believes parliamentarian life to be less suitable for women,” he said.

Lebanese parliament approved the new electoral law last June. It stipulates that each voter shall vote for one of the competing lists and shall be entitled to cast one preferential vote for a candidate of the same chosen list, with the country divided into 15 electoral constituencies.

Michael Young, senior editor at the Carnegie Middle East Center in Beirut, believes the new electoral law’s greatest winner may be Hezbollah. In a November 2017 article published in The National, Young said, “One of the main backers of the new law was Hezbollah, which anticipated that proportional representation would fragment parliament and in that way, ensure that the party would face no concerted opposition to its political priorities in the future.”

The large traditional blocks dominate the current parliament and were favored by the previous majority law. Young continued, “Indeed, the biggest relative losers are expected to be two of the politicians who once were part of the March 14 alliance opposed to Hezbollah, namely Mr. [Walid] Jumblatt and the current prime minister, Saad Hariri."

Jumblatt heads the Progressive Socialist Party and Hariri is the head of the Future Movement.

Pollster and election specialist Kamal Feghali concurred, telling Al-Monitor that the Progressive Socialist Party could face a tough competition by civil society candidates in the areas where it previously garnered massive votes, while the Future Movement will see its number of seats recede more specifically in Tripoli, where Hariri is challenged by former Internal Security Forces head Ashraf Rifi.

However, other experts disagree. Talal Atrissi, a political analyst and professor of sociology at the Lebanese University, told Al-Monitor, “The new electoral law is complicated and does not guarantee total victory to any Lebanese party. Hezbollah, for instance, may be challenged in the Bekaa-Zahleh districts where a small number of votes can also yield influence. The new law is not reassuring to anyone and confusion is reigning over all the Lebanese political parties."

Atrissi said that while Hezbollah may lose in one constituency, it may gain in other areas, citing the example of the possible victory of Osama Saad, Hezbollah’s ally in Sidon. It is still not clear on what list he will be running, but if elected, he will be taking one seat away from the Future Movement.

Fadlallah explained that other areas that could prove challenging include the large Baalbek-Hermel constituency that has 10 seats, where Hezbollah’s rivals — such as the Christian Lebanese Forces and the Future Movement — could secure the necessary 10% threshold. Jbeil could also be taxing. Hezbollah and its Christian ally the Free Patriotic Movement (FPM) still disagree over the candidacy of Zeaiter, who is running in a majority Christian area. “The FPM has refused to endorse Zeaiter because they would prefer a more neutral candidate,” Atrissi said.

Both Fadlallah and Atrissi agree that Hezbollah will win with its Shiite Amal ally all seats in their bastion of south Lebanon, running against the communists and independent lists. “Hezbollah had to exert more pressure on its constituency to convince it to participate in the next poll. There has been an evolution in Hezbollah’s audience that is now more preoccupied with service and development issues than war. Expectations are high and people feel that the group is not prioritizing issues related to livelihood. Shiites support Hezbollah’s struggle against Israel, but when it comes to the group’s management of social and developmental dossiers, not everyone is satisfied with its parliamentarians' performance,” Fadlallah added.

War has been at the heart of Hezbollah’s discourse in Lebanon. In his book “Hezbollah: The Story from Within,” Naim Qassem, Hezbollah’s deputy secretary-general, underlined holy war as one of the group’s three main foundations, besides the belief in Islam and loyalty to Iran's velayat-e faqih.

“Hezbollah’s engagement in Syria is significant. At times its members were fighting on several hundred front lines, which means that the preoccupation of some of its citizens with social issues is secondary to the group, given the massive war effort they are engaged in across the border,” Fadlallah noted.

Regardless of the election results, Atrissi believes that the priorities of the next government will not shift much from the previous ones. He said, “Internally no one wants to shake up Lebanon’s stability, and Prime Minister Saad Hariri wants his economic agenda to succeed. The only way I see changes in the next government is if Western or Arab powers decide to destabilize the country by either putting international pressure on Lebanon or by using local proxies."

It will nonetheless be interesting to see if Hezbollah’s hegemony over its constituency may be broken during the elections in May, not by traditional rivals such as the Future Movement, but by less likely ones such as prominent Shiite figures or the Communist Party, which were able to secure a limited victory in the 2016 municipal elections. The formation of final electoral lists at the end of March could be telling in that regard.