As an inseparable part of the Iraqi community suffers from unemployment, poverty and lack of services, the Iraqi young people taking part in the current anti-government protests are growing more and more frustrated with their government’s inaction, which may eventually leave them with violence as a last resort. 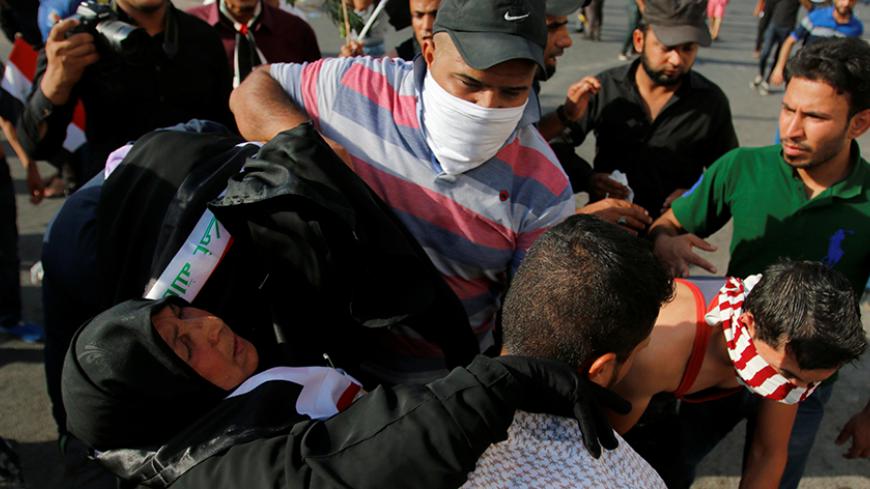 The anti-government movement led by Shiite cleric Muqtada al-Sadr along with secular young people seems to be headed for violence and clashes with the Iraqi security forces, especially if Haider al-Abadi’s government fails to meet the protesters’ demands that include appointing a technocrat government and eradicating corruption. The protesters have started preparing for a potential confrontation with riot police by buying gas masks, especially after security forces used tear gas to disperse protests May 21.

A number of young people posted photos on social media (the pages of which have been taken offline now) showing protesters wearing gas masks in a defiant message to the government after Iraqi riot police used tear gas to disperse a crowd May 27 as protesters tried to break into the Green Zone for the third time. They had already been successful on May 20 and in larger numbers on April 30 when they stormed the parliament building.

Al-Monitor interviewed a young man in his early 20s from Sadr City who had acquired a gas mask. Revealing only his first name, which he said was Haider, he said that he regularly participates in the demonstrations held in Baghdad every Friday.

Like other demonstrators his age, Haider expressed his indignation toward the government for failing to provide Iraqis with adequate services and job opportunities.

In fact, Haider represents a large section of Iraqi young people — 40% of the total population — who have grown frustrated with the situation in the country. Their anti-regime sentiment can be heard in the streets, in cafes and on public transportation. They are part of the Iraqi community suffering from unemployment, poverty and inadequate services such as the delivery of electricity; power outages only add to the frustration with the government’s empty promises. Some say that such a state of despair could cause Haider and his peers to turn to violence as a last resort.

However, Rezan Shex Dler, a Kurdish member of the Iraqi parliament, doubted this, saying, “Protesters are highly unlikely to resort to violence.”

Dler, a member of the Patriotic Union of Kurdistan (PUK), told Al-Monitor, “Protesters are keen on remaining peaceful.” He visited Tahrir Square in February to witness one of the demonstrations that have been ongoing since July 2015 and to listen to the people’s demands as a member of Iraq’s parliament. “The demonstrations are not likely to escalate,” he said.

The higher coordination committee organizing the protests, which includes secular Iraqis and Sadr followers, has already taken the decision to expand the rallies, announcing at a press conference June 6 that further demonstrations will be held after sunset during Ramadan on weekdays, in addition to those organized on Fridays.

Although Abadi and Hadi al-Amiri, a leader in the Popular Mobilization Units and the head of the Badr Organization, have called for postponing the demonstrations, the committee organizing the protests remained determined to continue the movement.

Abadi and Amiri are opposed to demonstrations because Iraqi forces are currently engaged in a fierce battle with the Islamic State (IS) in Fallujah, 62 kilometers (38 miles) from Baghdad. They argue that demonstrations will drain security forces who have to protect the protesters and fight IS at the same time. However, the demonstrations’ coordination committee considered in its statement June 6 that postponement is “an unacceptable evasion of responsibility.”

In an interview with Al-Monitor, a member of the security committee at the Baghdad Provincial Council, Saad al-Muttalibi, said, “Demonstrators have clearly started rioting. Violent discourse is growing among the protesters.”

He added, “By monitoring the protesters’ social media posts and press statements, one can easily discern violence or the decision to resort to it.”

But cleric Iyad al-Kaabi, a Sadrist student at the Shiite seminary of Najaf and one of the Islamic leaders of the demonstrations, told Al-Monitor, “Protesters are armed with flowers, peaceful expressions [on their faces] and Iraqi flags.” However, he added, “These demonstrations might turn into a general revolution if the government continues to ignore the people’s demands.”

Still, referring to the protesters’ response to the potential future use of violence by security forces who have already used brutal actions to disperse the protests, Kaabi said, “The demonstrations will remain peaceful.”

Jassim al-Hilfi, a member of the high coordination committee, deplored “the security forces’ recent use of violence against protesters. The authorities think that violence can bring an end to protests. … But we believe that it cannot solve anything.”

He told Al-Monitor, “Imposing tighter security measures will only complicate the issue. The authorities’ use of violence would justify any recourse to it by the crowds who would then be convinced that their peaceful demonstration is ineffective.”

Hilfi said, “The country is already plunged in violence. … Violence is in nobody’s best interests. The government must be aware of the stakes and understand the people’s indignation.”

The Iraqi government must take the protesters’ demands into account and prevent any recourse to violence by the security forces in this wave of demonstrations, as that could open the door to further violence and counterviolence, dragging the country into the unknown.