The planned construction of a pipeline connecting Iraqi Kurdistan with Iran could further cement Iran's position as the regional energy hub — and also benefit Kurds on both sides of the border. 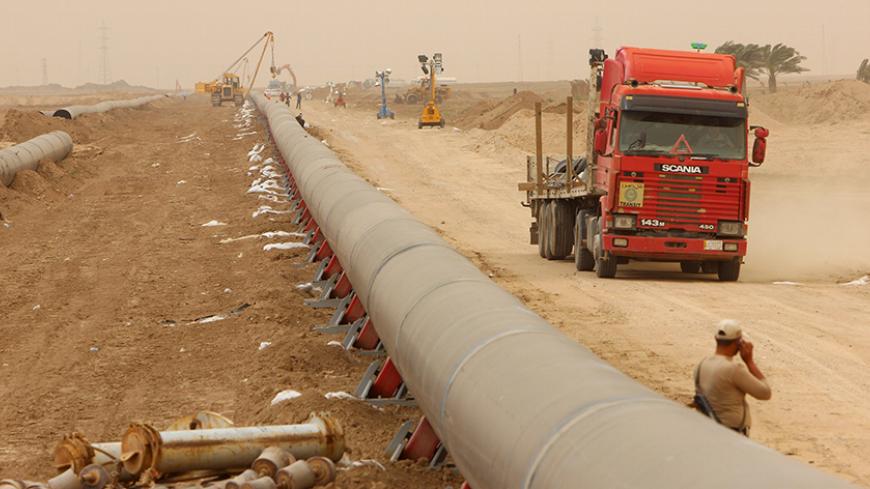 Workers set up a natural gas pipeline during a dust storm at Iraq's border with Iran in Basra, southeast of Baghdad, April 12, 2016. Iran is looking into building an oil pipeline from northern Iraq into western Iran. - REUTERS/Essam Al-Sudani

For the past two decades, energy interconnectivity has been one of the pillars of Iran’s regional relations. From the early days of the so-called oil swap deals between Iran and Central Asia in the 1990s through the expansion of a regionally structured grid of gas pipelines, and to a growing connectivity of electricity grids, Iran has gradually become the region’s main energy hub. In this process, Iran is not just focusing on expanding its own export potential, but on the notion of regional energy interdependency. In fact, the latest initiative — a planned crude pipeline from Iraqi Kurdistan to Iran — highlights the country’s indispensable role as an energy hub in the entire region.

Indeed, Iran and the Kurdistan Regional Government (KRG) have reportedly agreed on the technical details of a plan to build a pipeline with a capacity of up to 250,000 barrels per day (bpd) of crude oil to Iran. Reports highlight that the pipeline would connect Koysinjaq in the KRG, crossing the border at Parvez Khan and then go to Kermanshah in western Iran, where the crude would be inserted into the Iranian pipeline system and potentially used in the country’s northern refineries.

The idea of a pipeline connecting the KRG with one of Iran’s western refineries had been initiated in 2014 following major disagreements between the KRG and the Baghdad government regarding the flow of payments from Baghdad for oil exports through the existing pipeline going to the Turkish port of Ceyhan. Tensions between Baghdad and Ankara over Turkey’s position toward the so-called Islamic State as well as the deepening Syrian crisis were additional parameters in the Kurdish calculation to develop an alternative oil export route. However, Tehran needed to make sure that the move would not upset the Baghdad government — an important regional ally for Iran. As such, a balancing act started in the triangle between Tehran, Baghdad and Erbil and also a careful weighing of the different interest groups that would benefit or be undermined as a result of crude oil flowing from the KRG to Iran.

From the KRG’s perspective, setting up a second export route in addition to the pipeline to Ceyhan had been a priority for some time. In fact, over the past two years, a growing segment of the Kurdish oil had been transported through trucks into Iran and used in northern Iranian refineries. While this gradually created a justification for the planned pipeline, the dynamic also introduced more and more stakeholders into the complex picture that includes Kurdish, Iraqi, Iranian and Turkish interests, including traders organizing crude deliveries from the KRG to Iran and Turkey through trucks.

As far as Baghdad is concerned, the fact that the KRG would be less dependent on Turkey would be good news, but the complexity of the financial flows would potentially create an additional point of tension. In fact, oil exports that go through the Iraq-Ceyhan pipeline are settled through Baghdad with the federal government paying forward Erbil’s share — usually with lengthy delays. Evidently, Erbil expects that direct crude sales to Iran would be settled directly, generating needed revenues for Erbil. Interestingly, Baghdad seems to have agreed to the deal between the KRG and Iran under one condition: According to the KRG representative in Tehran, Nazim Dabbagh, Baghdad had showed willingness to support the project if the oil export to Iran also included Kirkuk’s oil production, which is currently being exported to Ceyhan. Kirkuk is an oil producing region that is claimed by the KRG, but outside the boundaries of the Kurdish Region in Iraq. Evidently, the inclusion of the Kirkuk oil would create a complex dynamic for payments from Iran and it is conceivable that Baghdad would insist for payments to go to Baghdad as opposed to Erbil.

From Tehran’s perspective, the deal is not only in line with its regional policy of increasing energy interconnectivity and trade with immediate neighbors, but it also helps it increase the efficiency of its oil production and distribution. In fact, the majority of Iran’s oil production is in the southwestern province of Khuzestan, while key population centers are in the northern and northwestern regions. Any import from the KRG that could become a feed for Iran’s northern refineries in Kermanshah, Tehran or Tabriz would thus reduce the need to pump crude from the south through Iran’s existing pipeline system. This logic is also the reason why Iran and Turkmenistan have restarted talks about a new round of swap deals in which Iran would receive crude oil in its Caspian Sea port of Neka and would in turn allocate oil from its southern field to customers of Turkmen oil.

As far as the payment issue is concerned, Tehran can offer two distinct scenarios to ease the tensions. On the one side, Tehran could purchase the oil flowing through the KRG pipeline and pay both Erbil and Baghdad directly, or it could enter into a swap deal and just allocate the same amount of oil to customers of Kurdish or Iraqi oil. In both cases Iran would earn a transit fee as well as benefit from the fact that it would reduce the amount of oil that has to be pumped to the northern refineries.

Beyond geostrategic and economic benefits, the planned project would also help the Iranian government alleviate an existing issue, the relatively low level of infrastructure development in the Iranian province of Kurdistan. In fact, Kurdistan province has historically suffered from a lack of investment and any infrastructure project would create new capacities and also benefit Iran’s internal cohesion. Though one can argue that there has been a greater effort by the Iranian central government to invest in the Kurdistan province, there is still room for further investment.

Experience has shown that in Iran, projects that have an economic as well as a geostrategic and an internal political justification will materialize, even though they initially face resistance from various corners for political and economic reasons. The planned KRG-Iran pipeline is such a project, and there are good reasons to believe that it will materialize. Once it is in place, one can expect a greater degree of interaction between the KRG and Iran, which should also benefit the economic and regional development of Iran’s Kurdistan province. It remains to be seen whether the other key decision-makers, especially in Erbil and Baghdad, will facilitate the implementation of this significant undertaking.

by Murielle KASPRZAK and Joseph SCHMID | AFP | May 26, 2022
END_OF_DOCUMENT_TOKEN_TO_BE_REPLACED