While Iran’s important trade with Iraqi Kurdistan could temper tensions, Iranian geostrategic concerns in the aftermath of the Kurdish independence referendum are driving government policy. 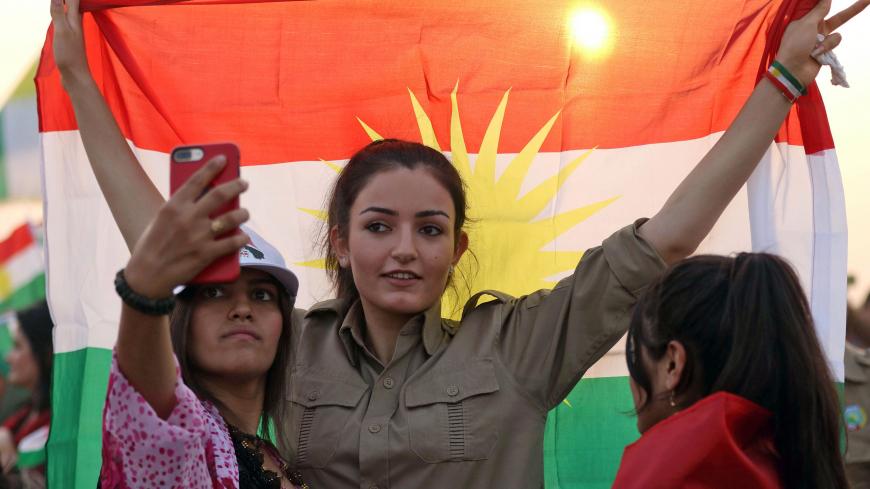 An Iranian Kurdish woman holds a Kurdish flag as she takes part in a gathering to urge people to vote in the upcoming independence referendum in the town of Bahirka, Iraq, Sept. 21, 2017. - SAFIN HAMED/AFP/Getty Images

Iran and the Kurdistan Regional Government (KRG) in Iraq have historically been on good terms. During the Saddam Hussein years, Iran was one of the main countries to host Kurdish leaders. In the post-Saddam era, Tehran and Erbil have enjoyed good neighborly relations. This relationship manifested itself in Iranian forces coming to the rescue of the Kurdish regions in their fight against the Islamic State (IS) in the summer of 2014. However, the recent independence referendum in the KRG has angered Tehran, and it is clear that the Kurdish moves will impact on both bilateral ties and wider regional alignments. One important aspect to consider when assessing the fallout between Iran and the KRG following the independence vote is the economic dimension of their relationship in the geostrategic context of Iranian concerns.

Iran and the KRG have a multilayered relationship; most importantly, it is not all driven by the government. On the one hand, there are various trade links between the two sides, starting from very active border markets up to cross-border trade and investment. There are five border markets between Iran and Iraqi Kurdistan. Prior to the recent events, there were plans to expand such entities to create jobs and also shift the unofficial trade toward official channels. In fact, the KRG is an important market for Iranian exporters. The trade volume between the two sides amounted to $8 billion in 2014, which made Iran the KRG’s second-largest trading partner, after Turkey.

In recent years, Iranian exports to the Kurdistan Region have dropped due to the conflict against IS. Yet, according to Kurdish sources, the trade volume between Iran and the KRG stood at $4 billion in 2016. This means that approximately 40% of the Iran-Iraq trade goes through the KRG.

Trade with the KRG is an important component of the trading activity in Iran’s western provinces of West Azerbaijan, Kurdistan, Kermanshah and Hamadan. An important part of the relationship has been the transit of Kurdish crude oil and petroleum products through Iran — a trade that has benefited Iran, as the purchase of Kurdish crude releases oil for export purposes in southern oil terminals. In other words, Iran can save on transiting oil and petroleum products from its southern production sites to its northwestern population centers. Before such trade was banned in the aftermath of the recent referendum, the daily volume of crude trucked to Iran stood at 50,000 barrels per day. The planned construction of pipelines would increase the volume to 250,000 barrels per day.

In addition, there is significant cross-border tourism activity, including health tourism in both directions, as well as extensive collaboration between security forces on both sides, especially in light of the fight against IS. As such, the current status of trade and energy relations has benefits for both sides.

Following the independence vote, one of Tehran’s first reactions was to close Iranian airspace to air traffic with the KRG on the request from Baghdad. However, closing all border crossings would be operationally very challenging due to the large volume of unofficial cross-border trade between the two regions.

Furthermore, Tehran has also carried out military maneuvers around the shared borders to contain any border irritations by separatist Kurdish groups. Iranian Defense Minister Brig. Gen. Amir Hatami is also reported to have stated that “Iran is opposed to any action that leads to a change” in the geographical divisions of the countries in the region. In more muscle flexing, Iranian authorities banned any trade in crude and petroleum products between the KRG and Iran. Indeed, the landlocked KRG depends on the cooperation of Iran, Turkey and Iraq to export its crude and import petroleum products. The impact of this ban is negligible on Iran, but would force the KRG to look for smuggling routes for its crude output, which will both be costly and risky.

It is conceivable that Kurdish authorities assume that smuggling routes can be used to circumvent a potential blockade by the mentioned neighbors. There are no statistics about the volume of smuggling between Iran and the KRG, but judging based on the ongoing discoveries of smuggled goods and hard currencies, the volume must be in the hundreds of millions of dollars. Though the KRG has been an important route for legal and illegal border trade between Iran and Iraq, there are signs that Tehran, Baghdad and Ankara will cooperate to penalize the KRG. Proof of this alignment emerged on Oct. 4 during an official visit to Tehran by Turkish President Recep Tayyip Erdogan when he stated during a joint press conference with Iranian President Hassan Rouhani, "From this moment forward, more decisive steps will be taken." Iraqi military leaders have also announced that they will coordinate efforts with Iran and Turkey to approach those border positions that are controlled by Kurdish forces.

What the KRG can count on is sympathy among the population in Iran’s Kurdish provinces, but it is not clear how far such emotional support would go in light of the resolve of the military and government institutions to put pressure on Erbil. At the same time, contrary to the analysis that Tehran is concerned about calls for Kurdish separatism in Iran, the concerns of Iranian strategists are different and more of a geostrategic nature.

Tehran experienced the push for independence in the aftermath of the collapse of the Soviet Union in 1991. The emergence of smaller states in the form of Azerbaijan, Armenia and Georgia made clear to Iran that new geopolitical formations bring with them new challenges. Regarding the KRG, Iran is worried about the emergence of new tensions between smaller states in a new regional constellation. On the one hand, Tehran is concerned about tensions between the KRG and the rest of Iraq, with potential for conflict over disputed territory, energy and water resources. On the other hand, an independent KRG could become the platform for hostile Israeli or US activity against Iranian interests as well as a platform for operations of Iranian Kurdish separatists.

At the same time, there are other lessons that the Iranian strategists draw from the post-Soviet Union collapse developments. The fact is that the Republic of Azerbaijan and Armenia not only have not stirred up ethnic emotions in Iran, but they have both generated new opportunities for Iran’s regional trade and investment activities. As such, an independent Iraqi Kurdistan, should it start its existence, will most likely gravitate toward Iran, not just because of shared culture and language, but also because of common interests in the fields of trade and energy.

For now, Iran is engaged in talks with relevant regional powers, i.e., Turkey, Syria and Iraq. In shaping its future strategy, Tehran can also count on the various Shiite militias inside the KRG and Iraq that are controlled by the Islamic Revolutionary Guard Corps. Iranian strategists wish to make sure that the KRG does not declare independence, and they anticipate that the final outcome of the current process would be determined in new negotiations between Baghdad and Erbil. Hence, they view the current decisions as temporary until a new contract is worked out between Baghdad and Erbil.

Therefore, despite all the current initiatives, Iran would wish to maintain a working relationship with the KRG. The presence of Iranian Foreign Minister Mohammad Javad Zarif at the funeral of former Iraqi President Jalal Talabani in Sulaimaniyah and the fact that he was welcomed by KRG Prime Minister Nechirvan Barzani underlines the prevalence of positive relations between the two sides. As such, as some observers have argued, Tehran could still emerge as an “impartial mediator and a friend of the Kurds, while expressing its view that Kurdish interests will be better served within a united Iraq.”