Businesspeople intervene in bitter ties between Turkey and Iraqi Kurdistan

Turkish businesspeople have launched a campaign to restore ties between Turkey and the Kurdistan Regional Government, which were hit hard last year after Kurdistan's independence referendum. 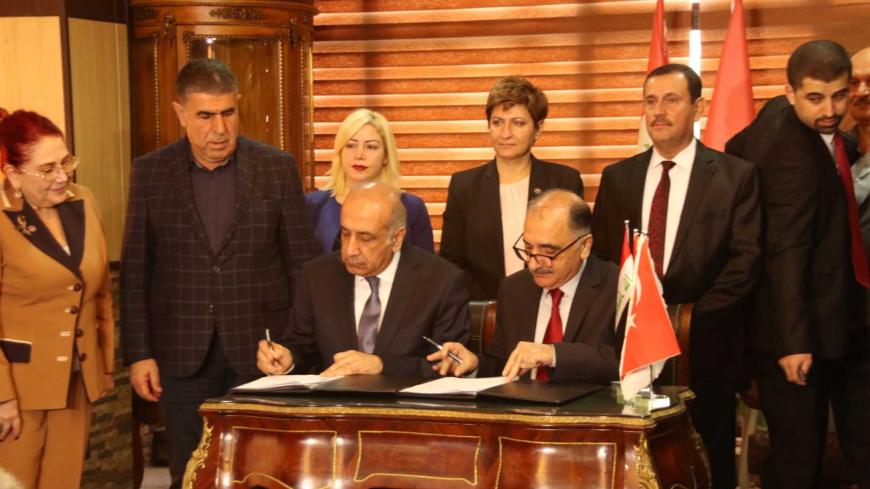 “Where will the KRG sell or send its oil from now on? The valve is in our hands. The minute we turn it off, there is nothing else to do,” Erdogan said in September 2017.

Ankara did briefly stop the oil flow from Iraqi Kurdistan to Turkey, but the border crossings have never been closed. Still, the mood between the two sides is still frosty. Turkey’s trade with the regions, and consequently the whole of Iraq in general, rapidly fell. Kurds began accusing Turkey of “punishing them with hunger.”

According to Turkey’s official figures, the volume of trade between the two countries has regressed to $9 billion from $12 billion over the past five years. According to figures from the Ministry of Trade, exports between January-October 2017 stood at $7.6 billion but fell to $6.7 billion in the same period of 2018.

As the KRG was looking for ways to activate its economy, a trade fair was launched in Sulaimaniyah that included the participation of dozens of companies from China to Egypt from different sectors including food, textiles, energy and consultancy firms.

Some 100 businesspeople from Turkey attended the fair, which attracted much attention from locals. Yet the goal of the Turkish delegation’s visit was not just limited to the fair. The Turkish delegation was also mediating between Ankara and Erbil to reactivate trade relations between the two sides.

Mehmet Kaya, chairman of the Diyarbakir Trade and Industrial Chamber, said their goal was to restore the relations that had soured after the referendum. “Especially after the referendum, Turkey-KRG relations have been going through a process that goes beyond political tensions similar to the crisis Turkey is going through,” he told Al-Monitor. “Regional governments are doing most of their trade with the KRG and Iraq without intergovernmental initiatives, hence our initiative to visit Sulaimaniyah. Our goal is to upgrade our ruined relations to high levels.”

The Turkish delegation’s first step toward achieving their goal was to visit the Sulaimaniyah Chamber of Commerce, where several cooperation agreements were signed between Turkish and Kurdish businesspeople.

Kurdish businesspeople are also keen on restoring ties. Yasin Faraj, vice chair of the Sulaimaniyah Commerce and Industrial Chamber, urged Turkey to lift the embargo it had placed on the Sulaimaniyah airport after the referendum. “Yes, we have some level of relations with Turkey, but we need stronger relations. We need serious efforts by businessmen and chambers of commerce,” he told Al-Monitor.

After Sulaimaniyah, the delegation also visited Erbil and Dahuk and signed similar agreements with their counterparts in these provinces.

According to Kaya, improvement in the bilateral trade will also pave the way for political reconciliation. “Turkey and the KRG have to re-establish a proper political relationship. This is for the benefit of the two sides. Both our officials in Turkey and those here want a resumption of good ties. Iraq, which once was the best buyer of Turkish goods, is now down to 10th place. Turkey doesn’t import much from here apart from oil, but we see that almost all Turkish products are exported to the Kurdish region,” he said.

But can relations between the two sides really be normalized in the foreseeable future?

Aso Kerim, a former Iraqi Kurdish parliamentarian, believes the KRG’s improving ties with the central government will have positive impacts on its ties with Turkey.

“After the referendum, relations between the Kurdistan region and Turkey became politically complicated. Kurdish oil was marketed worldwide via Turkey. Commercial activity did not stop. Turkish companies continue to operate in Kurdistan. The number of companies may have reduced a bit, but Kurdistan shops are full of Turkish products. There is still a Turkish consulate in Erbil, but relations have not returned to earlier levels,” Kerim told Al-Monitor. “There has been a change in Iraq after the recent elections. There is a new prime minister and parliamentary speaker. The Kurds have joined the new government, and their relations are slowly returning to normal. Normalization of ties between the Kurdistan region and the Baghdad government will positively affect influence with Turkey.”

Meanwhile, some experts don’t agree that the referendum had a significant impact on ties between Ankara and Erbil. According to political science professor Kamuran Mantik at Salahuddin University in Erbil, relations between the two are still good.

“I don’t think there is a problem between Turkey and the Kurdistan region. Turkey has already monopolized this region. Moreover, existing commercial and economic relations did not change much after the referendum. Turkey did not close the gates. The only change is political. Kurdish leaders thought Turkey would not react to the referendum, but this didn’t happen. Turkey made deals with regional powers and made the referendum useless. Otherwise, existing economic relations continue as always,” Mantik told Al-Monitor.

The Kurdistan region is a priceless market for Turkey. Aside from Arabic shop signs, the provinces are much like any town in Turkey with a great interest in Turkish products.

The only impeding factor for the trade ties is political problems. The region is one of the most important spheres of economic competition between Turkey and Iran. Although one may think Iran has the upper hand in the uneasy relations between Turkey and the KRG, the US embargo could change that.