Boeing deal would reverse 1993 decision to sell to Saudis, not Iran

A $17 billion deal by Boeing to sell Iran more than 100 civilian airplanes has major ramifications for US-Iran relations, say American and Iranian analysts. 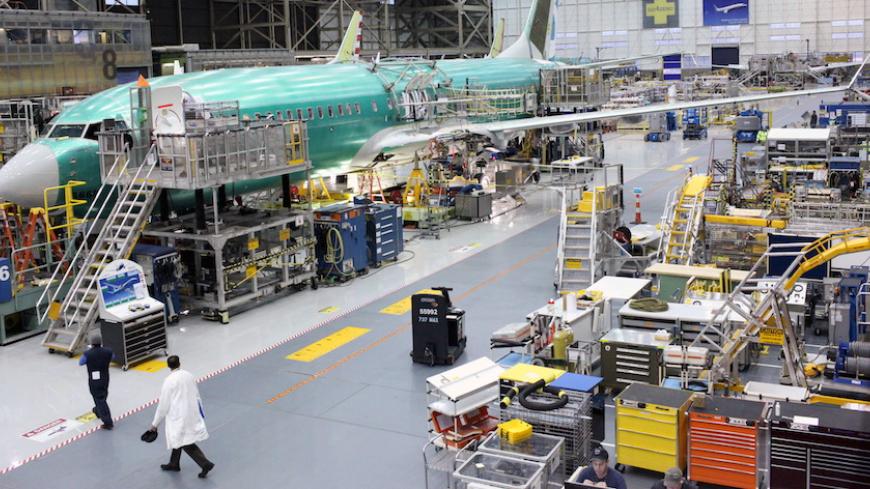 A Boeing 737 MAX plane is seen during a media tour of the Boeing plant in Renton, Washington, Dec. 7, 2015. - REUTERS/Matt Mills McKnight

A multibillion-dollar deal by Boeing to sell civilian airliners to Iran would be a major financial, diplomatic and psychological breakthrough between the United States and the Islamic Republic and reverse a decision by the Bill Clinton administration 23 years ago to block such sales and provide planes to Saudi Arabia instead.

Bruce Riedel, a veteran national security official in four US administrations, told Al-Monitor that Boeing and other US aircraft companies were eager to sell to Iran when Clinton came to office in 1993. Riedel said the companies argued that such deals would enhance airline safety and undergird a US diplomatic opening to Iran, the same arguments being used today.

But Clinton, said Riedel, was already committed to a policy of “dual containment” of Iraq and Iran that sought to rein in both governments. He was “eager not to undermine dual containment but also eager not to have Boeing suffer a business loss to Airbus,” Riedel said. “So we came up with the idea that we could get the Saudis to buy Boeings.”

Commerce Secretary Ron Brown traveled to Riyadh “to convince the Saudis to buy $6 billion worth of Boeing airplanes so Boeing would not lobby for an Iran sale.” The pitch, Riedel said, was “these are the best airplanes in the world. If you’ll do this, we’ll prevent Boeing from selling to Iran. So you get a two-fer.”

The choice not to sell to Iran at that time preceded the Clinton administration’s decision to block a major oil exploration deal between Iran and Conoco in 1995 and to slap a comprehensive embargo on US trade with and investment in Iran, which was supporting Palestinian groups carrying out acts of terrorism against Israelis. While many US sanctions against Iran, including those related to terrorism, remain, the recent nuclear agreement contained a specific carve-out for providing US civilian airliners, parts and related services to Iran.

The Boeing deal, if it goes through, would be “a huge change in American policy,” Riedel said.

For Iranians, such a sale would be concrete evidence of the benefits of the so-called Joint Comprehensive Plan of Action (JCPOA) and address a chronic safety problem. Many of Iran’s civilian airliners are old, including Boeings provided before the 1979 revolution, and they have a pattern of experiencing deadly mechanical failures.

A senior Iranian official, responding to an email from Al-Monitor on condition of anonymity, said the Boeing deal “is an important step showing that all sides can benefit from the implementation of JCPOA. Iran is open to dealing with other US companies, including [medical equipment supplier] General Electric and others.”

Asked for his reaction, Nasser Hadian, a professor of political science at the University of Tehran, told Al-Monitor, “Although it was wrong to sanction the selling of civilian airplanes from the beginning, selling them can undoubtedly enhance US soft power in the eyes of ordinary Iranians. It is good for the proponents of the deal in Iran as well. They can argue that fruits of the JCPOA are becoming gradually and increasingly accessible.” Hadian added, “It is good for the American economy by creating more jobs and it is good for Iranians because they can travel safely.”

The sale, which according to sources at Boeing is valued at about $17 billion, would involve over 100 aircraft and last nearly a decade, providing insurance that Iran will continue to implement the JCPOA.

In response to a query from Al-Monitor, Boeing sent a statement acknowledging that the deal is contingent on approval from the US government, which gave the company the go-ahead to begin negotiations with Iran Air following implementation of the nuclear deal.

“We understand that the situation in the region is complicated and ever-changing,” the statement read. “Should the US government reinstate sanctions against the sale of commercial airplanes to Iranian airlines, we will cease all sales and delivery activities as required by US law.”

The statement went on to say that non-American aerospace companies are “now aggressively marketing their products and services to Iranian airlines,” including Airbus, which has a preliminary agreement to sell 118 planes to Iran for $25 billion.

The Iranian market “can go to aerospace companies in other countries, plus the jobs that go with those business opportunities — or US companies and workers can participate in what is expected to be a growing market for decades to come,” the statement read. “According to the Department of Commerce, aerospace exports support hundreds of thousands of American jobs.”

Boeing acknowledged that financing for the deal has yet to be determined but said that payment “will be done in full compliance with US sanctions.”

US banks are still barred from direct contact with Iran and large non-American banks have been reluctant to re-enter the market for fear of reputational and political risk.

Ellen Laipson, a distinguished fellow at the Atlantic Council and the Stimson Center, who also served on the National Security Council under the Clinton administration, told Al-Monitor that civil aviation was always a promising area for US-Iran cooperation. “There’s a logic to it,” she said. But she cautioned, “This is also the very beginning of a process. It may end up being a smaller transaction or it might never happen.”

Iran must ensure that the airliners will only be used for civilian purposes and will not be diverted to provide arms and other material to groups such as Hezbollah or President Bashar al-Assad's government in Syria. Riedel said that Iran has in the past used civilian planes for such military purposes.

Riedel finds it likely that the sale will become enmeshed in US presidential politics and said it might be better to push consideration of the deal into 2017.

“My bet is that Hillary [Clinton] will not stand up for the airline business if it’s a question of being soft on Iran,” Riedel said. “What she would do after January is anyone's guess."