In his speech to the European Parliament, Israeli President Reuven Rivlin called to reconstruct Gaza, warning that Gaza residents are being held hostage by Hamas. 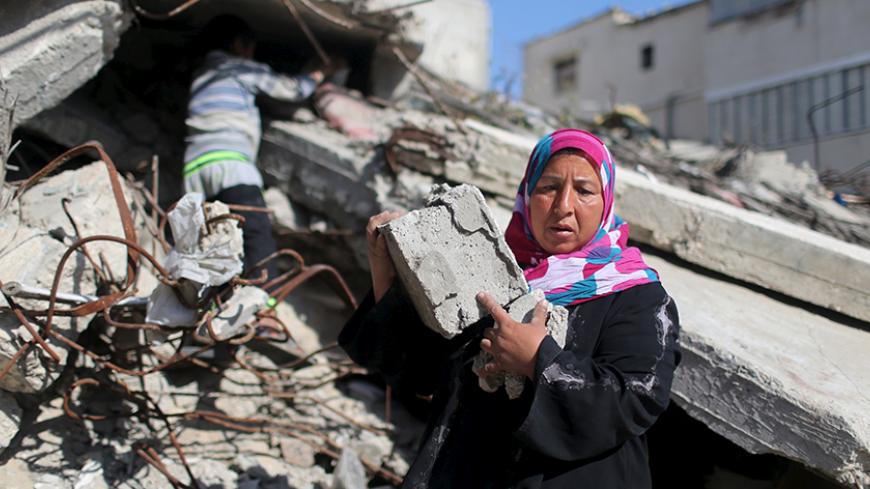 A Palestinian woman collects bricks for sale with her son from the ruins of a house destroyed during the 2014 war in Khan Yunis in the southern Gaza Strip, March 8, 2016.

Israeli President Reuven Rivlin called for the rebuilding of the Gaza Strip June 22. It wasn’t the first time he’s done that either. Rivlin uses almost every opportunity to argue that rebuilding Gaza is an Israeli interest. He holds stubbornly to the position that resolving what he calls the human tragedy there is critical. In the past, these comments have aroused the ire of right-wing activists.

It is true that after Operation Protective Edge in 2014, the international community promised $5.4 billion to rebuild Gaza’s infrastructures destroyed during the military operation. This aid project, funded mainly by the European Union and the United States, should have spared the Gaza Strip from total collapse. In order to prevent the financial aid from ending up in the hands of Hamas, it was decided to create a joint mechanism to oversee the project, involving Israel, the Palestinian Authority (PA) and the United Nations.

According to the framework that the parties agreed to follow, financial donations would be transferred to Gaza based on progress being made on each project, under the supervision of a Reconstruction Administration. Creating that body was to be the responsibility of the PA.

The role of a similar group, established by the United Nations, was to set priorities in managing this enormous reconstruction project, approve the work and oversee it.

Israel’s role in this three-part mechanism was to allow the transfer of building materials, heavy machinery and crews provided by international construction companies into the Gaza Strip.

After almost two years, it can safely be determined that this mechanism has failed. The reconstruction of Gaza looks even more remote than ever. It is taking place at a snail’s pace, without any organized work plan, target dates or objectives.

At a meeting of the Knesset’s Foreign Affairs and Defense Committee in February 2016, head of Israel’s Military Intelligence Maj. Gen. Herzi Halevi emphasized, “The humanitarian situation in Gaza is deteriorating.” Halevi even warned that if there is no significant change, then Gaza will be unfit for human habitation by 2020, just as a United Nations report determined in September 2015.

“Anyone who thought that Gaza would be rebuilt within five years now knows that this is impractical,” a senior Israeli security official told Al-Monitor June 23 on the condition of anonymity. “At first we thought that aid convoys with equipment and goods would enter Gaza and that we would sit here and watch a huge, well-planned project taking place, with one hand guiding and the other implementing it. The reality is that this is not happening yet. Trucks and equipment enter Gaza through the Karni crossing in coordination with the project’s administration, but it is nowhere near what appeared in the original plan.”

The Israeli source estimated that if the work continues in the same way and at the same pace, the reconstruction of Gaza could last a generation.

Ever since the reconstruction project began, sources in Gaza and Israel, as well as representatives of the donor nations, have claimed that the PA under President Mahmoud Abbas has been inserting sticks between the spokes of the wheels of reconstruction. In March 2015, representatives of the five largest states in the European Union — Germany, France, Great Britain, Italy and Spain — protested that the PA is not doing enough to advance reconstruction projects in Gaza. EU representatives even sent stern messages to senior PA officials about their behavior, but nothing has changed on the ground. It is now believed that the PA under Abbas has no interest in the rebuilding of Gaza, because that would help the Hamas regime, even if only indirectly.

Both the leaders of Hamas and the residents of Gaza are convinced that upon the advice of his closest advisers, Abbas has made a strategic decision to prevent the rebuilding of Gaza, based on the assumption that a dire economy would eventually lead to the collapse of the Hamas regime.

“We know this. We’ve said it a thousand times. Abbas doesn’t want to help the people [in Gaza],” a leader of Hamas in Gaza told Al-Monitor on the condition of anonymity. “Some people there [in the PA] — and we know exactly who they are — have been telling him [Abbas] that his own interests will suffer if rebuilding efforts proceed. The PA believes that if they stop the work, they can apply pressure on Hamas, but that won’t happen.”

According to the same Hamas member, leaders of the movement would be willing to help in any way they can to advance reconstruction efforts. They have even said as much in messages to the PA, asking to be allowed to act independently, without interference on the ground. The problem is that they always run into “strange explanations and promises that are never fulfilled." He added, "There is a guiding hand that interferes with the rebuilding efforts. That much is obvious. Anyone can see it. Abbas is acting against his own people. He is prepared to let them suffer just to harm Hamas."

This would not be the first time that Abbas, senior officials in the PA and heads of the Fatah movement operated under the working assumption that a dire economic situation would eventually overwhelm the Hamas movement and force it to give up its rule. After the Hamas coup in June 2007, the expulsion of PA officials in Gaza and the collapse of Abbas’ rule there, Israel imposed a closure on Gaza that continues until today.

At the time, officials in the PA were convinced beyond a shadow of a doubt that with Hamas under pressure and Gaza sealed hermetically, the needs of Gaza’s residents could not be met. Based on that same reasoning, it was also thought that within just a few months, the leaders of Hamas would realize that they are in a dire situation and forego their control and rule over Gaza. Back then, messages along these lines were relayed to Israel, encouraging it to tighten the closure and bring about the collapse of the Hamas regime. Nine years have gone by since then. Hamas is still in power in Gaza, and the situation of the local population is worse than ever.

The residents of Gaza are being held hostage by a terrorist organization. That is what Rivlin claimed June 22 in the speech he delivered in Brussels. But the heads of the PA and other senior Fatah officials are also making cynical use of the people of Gaza for their own political needs. What this means is that the 1.8 million residents of the Gaza Strip are victims of a divided Palestinian leadership.