Israel has allowed trucks with goods to enter Gaza, thus cooperating with the same Fatah-Hamas government it refused to recognize four months ago. 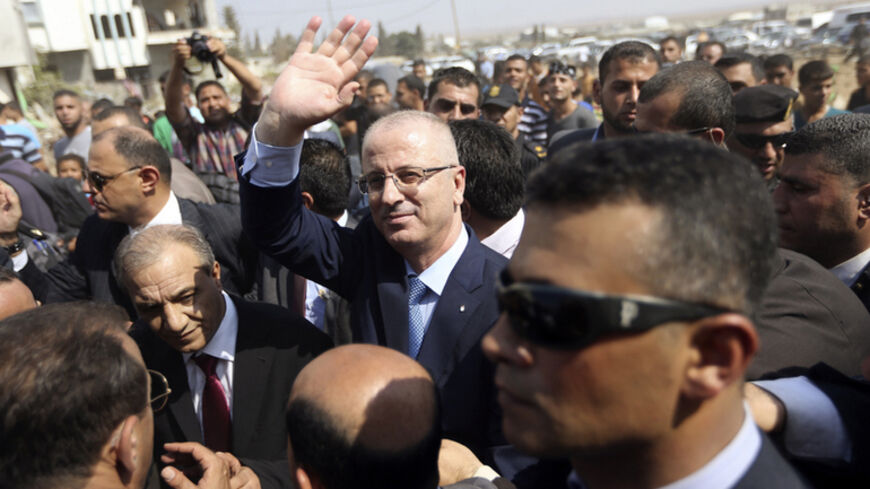 Four months after the June swearing-in ceremony, Israel has backed off its militant pronouncements and is cooperating with the Palestinian unity government. Israel, which spoke with such decisiveness before Operation Protective Edge, has been forced to change its stance, and cooperation with the Fatah-Hamas government is now a concrete fact.

By way of a reminder, when Palestinian President Mahmoud Abbas surprised everyone by declaring a unity government with Hamas in April of 2014, Israel was quick to react with harsh condemnation. At an urgent Cabinet consultation convened at the time by Prime Minister Benjamin Netanyahu, some of the ministers demanded that Israel impose severe sanctions on the Palestinian Authority (PA); but fearing an additional confrontation with the Barack Obama administration, which recognized Abbas' new government, Israel made do with threatening to impose sanctions. Israel did not even freeze the tax revenues it collects for the PA, as it does each time it thinks the Palestinians are going in an unacceptable direction.

Israel started taking action against the unity government in the West Bank only after the June 12 kidnapping of the three youths — Gil-Ad Shaer, Naftali Frenkel and Eyal Yifrach. The “Brother's Keeper” operation ballooned into Operation Protective Edge, and the rest is history.

The military confrontation could have been avoided had Israel acted with forethought and wisdom. But Netanyahu and his government needed a massive operation in Gaza, dozens of dead Israelis and thousands of dead and injured Palestinians to understand what was so obvious to anyone who read the internal Palestinian map correctly: Abbas would only obtain a foothold in Gaza through a Fatah-Hamas unity government. That would not only be good for Fatah, which was humiliated and violently kicked out of Gaza seven years ago in 2007, but would also serve Israel’s security interests.

Last week, on Oct. 9, the Palestinian unity government held its first meeting in the Gaza Strip since the 2007 overthrow. For the government to convene, Israel was required to allow the Palestinian ministers who reside in the West Bank to pass through its territory on their way from Ramallah to Gaza. Officials of the Israeli administration for Coordination of Government Activities in the Territories (COGAT) prepared the Erez crossing for the passage of Palestinian Prime Minister Rami Hamdallah and his Cabinet ministers, who were quick to pose for a photo op embracing Hamas Gaza leader Ismail Haniyeh, who came to greet and congratulate them.

It was not simply a procedural matter of granting permits; it was a clear Israeli diplomatic move: to allow the Palestinian unity government to convene in Gaza under the auspices of the Hamas leaders in the Gaza Strip — the ones whom Israel viewed as legitimate assassination targets less than two months ago.

In fact, the whole process of Gaza’s reconstruction following Operation Protective Edge is taking shape by virtue of the unity government, which Israel pilloried as a partner in Hamas terrorism until very recently.

At the end of September 2014, the Ad Hoc Liaison Committee convened in New York to discuss the rehabilitation of Gaza, with the participation of UN Secretary-General Ban Ki-moon, US Secretary of State John Kerry and EU High Representative for Foreign Affairs and Security Catherine Ashton. Seated around one long table were Hamdallah and Deputy Israeli Foreign Minister Tzachi Hanegbi. As reported on Al-Monitor by my colleague Akiva Eldar, Israel confirmed Hanegbi’s participation at the conference even though the head of the unity government which it does not recognize was also in attendance.

The New York conference adopted decisions regarding the nature of the rehabilitation and supervision mechanism, and at another conference, convened in Cairo on Oct. 12, the donor states pledged $5.4 billion, even more than the original Palestinian request for $4 billion in aid. The United States, for its part, pledged a generous $212 million. The US aid and its determination to bring about Gaza’s rebuilding and to cooperate with the Hamdallah government, oblige Israel to cooperate with it as well.

To that end, an unusual dialogue is underway between the government’s Coordinator of Activities in the Territories Maj. Gen. Yoav “Poli” Mordechai and representatives of Hamdallah’s government. At the same time, a dialogue is also conducted between Israeli Foreign Ministry officials and the office of Robert Serry, the UN representative in the Middle East who in the past has coordinated between Israel and Hamas on various issues.

This week, on Oct. 14, the first trucks drove into Gaza carrying construction materials for the Gaza Strip. Mordechai described the first shipment as a “pilot,” an experiment designed to examine whether representatives of the Palestinian government and UN will oversee the use of the material on the ground — and how.

The initial cargo contained 600 tons of cement, 50 trucks of aggregates and 10 trucks loaded with iron. The COGAT promised that in the coming weeks, Gazans would be allowed to sell agricultural produce to the West Bank, including fish, to ease the life of Gaza's residents.

Too bad the Netanyahu government didn’t think of a “pilot” for the Palestinian unity government four months ago, when Hamas viewed it as a lifeline and was willing to give up most of its principles to ensure its survival. With some measured and thoughtful Israeli conduct, rather than its impulsive behavior, the pilot project would have stood a chance of success and the past summer would perhaps have been different.