Israel has quietly changed its stance toward Gaza with a loosening of the blockade to improve the transfer of goods and movement of people in the hope of averting another explosion in the enclave. 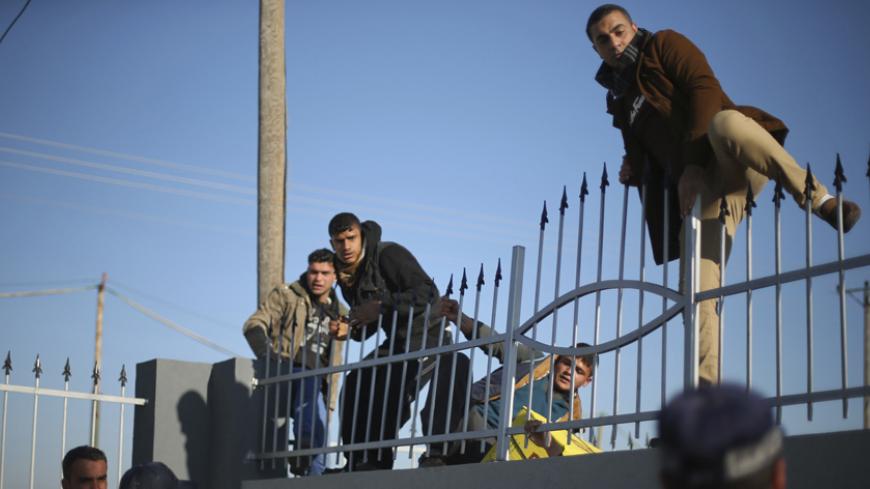 Palestinians, hoping to cross into Egypt, climb a wall as policemen loyal to Hamas stand guard at the Rafah crossing between Egypt and the southern Gaza Strip, Jan. 20, 2015. - REUTERS/Mohammed Salem

A war is being waged in the Sinai Peninsula between the regime of Egyptian President Abdel Fattah al-Sisi and the Islamic State (IS) entity, formerly known as Ansar Bayt al-Maqdis. It is an all-out, no-holds-barred war. Sisi knows that if he does not succeed in overcoming the deadly, recalcitrant terrorist elements in Sinai, it will be the beginning of the end of his regime. The Egyptians asked for and received authorization from Israel to operate heavy weapons and introduce arms into Sinai ordinarily prohibited there according to their peace treaty. Meanwhile the terrorists, on their part, are not taking it easy. They have been slaying scores of Egyptian soldiers and civilians in harsh attacks. Sisi decided to wipe the Egyptian city of Rafah off the map to create a completely sealed buffer zone between Gaza and Sinai. On Jan. 31, the Egyptian courts declared the military wing of Hamas a terrorist organization. It appears that the situation will only continue to intensify in the weeks and months to come.

The strategic balance in the region is as follows: Israel from the north, Gaza in the middle, Egypt's Sinai on the south. Gaza is blockaded on all sides, but armed to the teeth with missiles that can threaten Tel Aviv and most of the territory of the State of Israel. IS, meanwhile, is shedding much Egyptian blood in Sinai and does not appear to be on the verge of stopping. It's a free-for-all, everyone against everyone else, but only the residents of Gaza are trapped in a bubbling pressure cooker, which has exploded with growing intensity over the years.

"We have not managed to understand," said a high-placed Israeli military figure, "how it can be that the Gazans are not sick of the Hamas regime. How are they willing to continue to live in such a reality." This question, formulated by an Israeli security figure connected to the Palestinian experience in general and the Gaza experience in particular, is asked by the entire Israeli security system. During Operation Protective Edge, in July and August 2014, there were about half a million civilians in Gaza who became refugees, forced to leave their homes. Tens of thousands of Gaza residents lost their homes, which were destroyed in the course of the operation. About 2,200 people were killed in Gaza during the operation, and about 11,000 were wounded, including women and children, many of whom will never walk again or function independently for the rest of their lives.

In addition to all this, the Hamas regime is dictatorial. Hamas opponents are thrown from high places or shot in the knees to put them permanently out of commission. In the course of the operation, Hamas used brutal force to disperse spontaneous demonstrations that organized against it in Gaza. Now that the dust has settled, the fire has been put out, and business continues as usual. Hamas has absolute, boundless control in Gaza, and no one dares open their mouths or object. How can it be, Israelis ask. Why aren't the people disgusted with Hamas' rule?

"They fought for us," explained a wealthy Gazan merchant to an Israeli source recently. "Even someone who doesn't support Hamas cannot rise up against them. You don't understand Hamas," emphasized this Gaza resident. "They don't fight to build villas for themselves or to get rich. The people feel that Hamas fights for them, to break the blockade, to receive building materials, to allow students to get out [of Gaza] to study and laborers to get out to work. The moment that the people know that the regime fights for goals important to it, there's no point to resist."

True, most attention is now focused on the significant heating up along Israel's northern front and the exchange of blows between Israel and Hezbollah, the continuation of the civil war in Syria and the effort to halt IS (which continues to behead people). The list goes on. One must not, however, forget the ticking time bomb that is Gaza. Israel is keeping a close eye on it.

Slowly and quietly, under the radar, the stance of the Israeli security apparatus regarding Gaza has in recent months been changing. The process began even before Operation Protective Edge. That conflict disrupted its progress but now, after the winds have calmed a bit, it can continue. Israel's blockade policy is beginning to make room for a controlled and rational release of pressure in the Gaza pressure cooker. Another explosion, which will happen soon without substantive change in the lives of Gazans, is not good for anyone. Not for Israel, not for Egypt, not for Gaza.

As of now, Israel is trying to take the pressure off Gaza, to allow the Gazans to manage their economy and develop it. The catch is that Hamas is likely to attribute this improvement to its "victory" in the Protective Edge campaign. People in Israel say that the two things are not connected, that the policy began to change even before the campaign. The fact is, Israelis say, we broke the news about the change in policy to Gaza merchants even before the security deterioration that led to the operation.

It will be hard for the Israelis to prove this, but in the meantime the reality in the area is changing. The numbers of people leaving and entering Gaza are growing significantly, mainly students and laborers going to Judea and Samaria. Israel allows Gaza to export fish, agricultural produce, mainly to the Gulf states and to Palestinian Authority (PA) territory. The fishing zone has been increased. A Gaza reconstruction mechanism was created by UN envoy Robert Serry, PA envoy Prime Minister Rami Hamdallah and Israeli Maj. Gen. Yoav Mordechai, coordinator of government activities in the territories. This mechanism exerts tight regulation over the merchandise and wares that enter Gaza for reconstruction, but it does allow for their entrance.

In other words, Israel is beginning to reconcile itself to Hamas as a governing body and the Hamas movement as the entity that authentically represents the Palestinian people. No one in Israel is in love with the idea. Hamas was, and remains, a terrorist organization whose charter calls for the destruction of Israel. It has no religious or moral mandate to conduct negotiations with Israel or recognize its existence. On the other hand, at the moment this is what the Palestinians want.

Until now Israel has tried to edge Hamas out of the picture, to try to "help the Palestinians understand" that the organization is bringing catastrophe down on their heads, but things have changed. From now on, Israel is relinquishing all attempts to "educate" the Palestinian people. Instead it prefers to occasionally release the pressure in the cooker to prevent the next explosion.

The odds for the success of this policy are unknown. The situation in Gaza remains grave. At the Cairo donor conference to raise money to assist Gaza in Oct. 2014, billions were promised, but nothing has arrived. Except for Qatar and Saudi Arabia, which began to transfer the sums they committed to a few weeks ago, all the other countries' promises remain on paper only.

Due to a "diesel oil crisis," Gazans have only four hours of power out of 24, most of the time. Hopefully, this will increase to eight hours a day. Tens of thousands of people are still sleeping in public schools. Construction materials are flowing in slowly because there is no money to purchase them. The initial quantities are, of course, earmarked for Hamas infrastructure. Israel is taking into account that probably some of it is also going to repair the tunnels. Cement has become the most precious, expensive item in the Gaza Strip. Less than a year ago, a song in praise of cement became Gaza's greatest musical hit. In the face of all this, Israel's covert relief measures are a drop in the ocean.

"In the current state of affairs," the Israeli security official said, "it is not clear whether we will be able to avert the next explosion of the Gaza pressure cooker." All this is happening as a war is being waged a bit farther south, in Sinai, a war that has a direct effect on Gaza. A bit north from Gaza lies Israel, which is also engaged on several fronts simultaneously. Everyone is fighting with everyone else, and all are embroiled in one giant pressure cooker that results in quite a number of secondary, local explosions a year. The question is whether at some point we will have a Big Bang.