How these female engineers intend to fix Gaza’s roads

Three engineers from Gaza came up with a new technique for asphalt roads, hoping to fix the poor conditions of streets in the Gaza Strip. 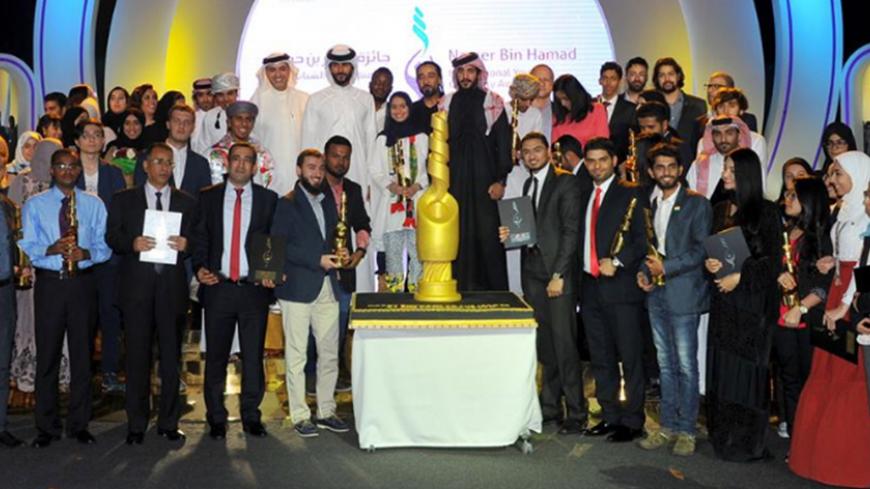 GAZA CITY, Gaza Strip — The poor conditions of roads in the Gaza Strip have pushed three Palestinian young female engineers who recently graduated from the Islamic University in Gaza City to focus their efforts on the industry of self-healing asphalt with metal scrap. Their project came as part of their university program in a bid to find solutions to the rough roads.

On May 9, the project won first prize in the scientific innovation category of the Nasser Bin Hamad (NBH) International Youth Creativity Award in Bahrain. The three engineers are Hadeel Abu Aisha, 22, Khadija Ramlawi, 22, and Nour Hassan, 21 — all graduates of the Civil Engineering Department at the Islamic University in Gaza.

“With time, cracks start to show on asphalt, and the traditional solution would be to pave the road every time, which is a costly option as 1 kilometer of asphalt costs about $1 million [in Gaza] because of the high cost of raw materials resulting from the restrictions imposed by Israel on imports. Our idea comes with a better choice,” Abu Aisha told Al-Monitor.

“Our idea is based on a self-healing process of the cracks in roads by adding iron fibers extracted from metal scrap to the asphalt, which is a mixture of bitumen and gravel, when paving the road for the first time,” she said. She said that adding iron fibers protects asphalt against degradation and eventual structural failure.

Abu Aisha added that the process is done by heating up the road with a special device while adding the iron fibers, which would melt down and contribute to closing cracks and resulting in a smoother surface.

According to Abu Aisha, when exposed to a temperature of 150 degrees Celsius (300 degrees Fahrenheit), iron and asphalt melt together and the cracks are closed. When the mixture cools, the surface becomes free of cracks. She said the lifespan of a traditional asphalt road is 25-30 years and after that the road becomes rough and in bad condition given the cracks and potholes.

She also explained that this technique would be good for municipalities, as they would not have to repave roads after the end of their lifespan, noting that the idea was widely acclaimed locally and at the level of municipalities. “This is especially true since almost all roads in Gaza are filled with cracks. Therefore, this project treats the problem without the need to repave the road,” she said.

Usually, cracks are left in the asphalt roads in Gaza without being filled or repaired by municipalities because of the high cost of repair. Should cracks be removed, the part of the road with cracks is partially paved or cracks are filled with some sort of paste mixture, which is not very viable.

“Our project will help municipalities save the cost of repairing roads while maintaining the asphalt. All this could be done by using metal scraps, which are abundant in Gaza, by recycling them and removing them from the environment,” Abu Aisha said.

Ramlawi told Al-Monitor, “The experiments we did in Gaza were successful, but we had some difficulties — mainly the lack of some necessary testing instruments such as the electromagnetic induction machine needed to generate temperatures for the asphalt, which is nowhere to be found in Gaza. We used instead a microwave to generate heat [in the experiments] and it worked.”

She said that they have been doing experiments and testing for an entire year to implement the project, which is the first of its kind, stressing that during her research she could not find any previous study on the subject.

Hassan told Al-Monitor, “We won the first prize among about 6,000 participants coming from 111 countries. This gave us great motivation to implement the project on the ground.”

“In Gaza we have great human energies and smart people. However, the ongoing Israeli occupation is hindering our country, making citizens only busy and preoccupied with trying to make a living and make ends meet in the face of the economic crises plaguing us as the result of the Israeli blockade that has been imposed on Gaza since 2007,” she added.

According to the NBH website, first-place winners are awarded a $7,000 prize and the NBH Shield, which is handed personally by the head of the Supreme Council for Youth and Sports in Bahrain, Sheikh Nasser bin Hamad Al Khalifa.

The three Palestinian winners feel sad as they cannot travel to Bahrain to receive their prize due to the ongoing closure of the Rafah crossing.

The Egyptian authorities have been closing the Rafah crossing since July 2013, opening it at irregular intervals for a few days only for special humanitarian cases such as for patients or students, due to the tense security situation in the Sinai Peninsula.

“We have repeatedly tried to travel through the Rafah crossing to Bahrain to attend the announcement of the names of winners in the conference that was held on May 9, but all our efforts were in vain. The granddaughter of the Palestinian ambassador to Bahrain received the award on our behalf in said conference that took place in Manama on May 9,” Hassan said.

She added, “We felt very frustrated that our efforts were in vain, but our country’s need for such initiatives and projects kept us going until we managed to implement it on the ground.”

The three winners are currently looking for international institutions interested in financing their project in the Gaza Strip. “We are willing to cooperate with any international party interested in developing and implementing the idea to overcome the problem of rough roads full of cracks all around Gaza.”