Is Israel inching closer to fascism?

Talking to Al-Monitor, professor Zeev Sternhell warns that the values of democracy and liberalism, on which the State of Israel was founded, are being eroded by the nationalistic approach of the Israeli right. 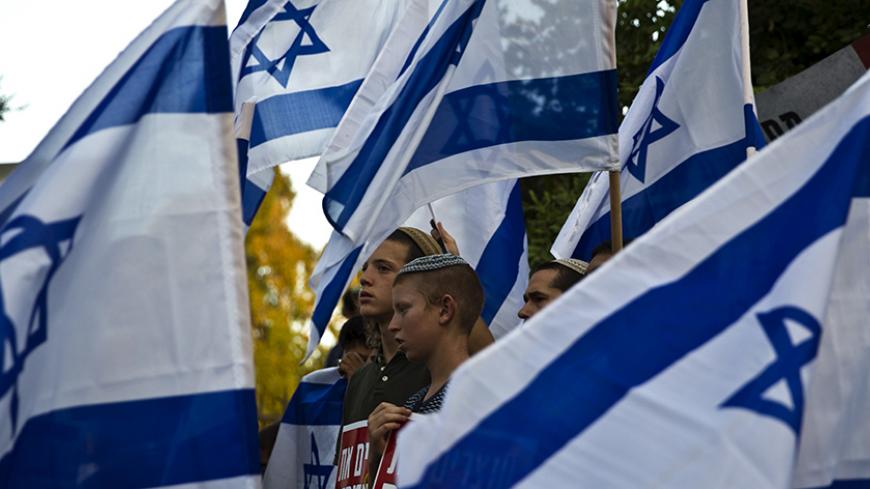 Maj. Gen. Yair Golan, deputy chief of staff of the Israel Defense Forces, spoke about trends in Israeli society reminiscent of the dark European era between the world wars at a May 4 event marking Holocaust Remembrance Day, the start of an emotional and special period in which Israelis remember the Holocaust, honor their war dead (May 11) and celebrate their independence (May 12). Almost at the same time, the prime minister of Israel once again pointed to the anti-Semitic phenomena in the world and the Middle East, saying they remind him of the dark era that preceded the 1930s in Europe.

Israeli society is not an amorphous place; the prime minister is the one who bears ultimate responsibility for the shape it is in. He himself demonizes his country’s minorities. He is the one who entrusted the education of Israeli children to a political party (right-wing HaBayit HaYehudi) that believes the biblical designation of “chosen people” justifies trampling the dignity and basic rights of millions of other people. And so, the words of Golan could be interpreted as an arrow directed at Prime Minister Benjamin Netanyahu. No wonder Netanyahu claimed Golan’s remarks were “fundamentally incorrect.”

Nonetheless, historic analogies are not a matter for generals, nor the jurisdiction of politicians. To examine whether Israel 2016 is reminiscent of the 1930s in Europe, or whether the association is indeed unfounded, Al-Monitor sought the help of professor Zeev Sternhell, the former head of the political science department at the Hebrew University in Jerusalem. It is hard to find a greater authority to referee the stormy debate sparked by Golan.

Fascism is the central theme in Sternhell’s personal and professional biography. Sternhell’s Polish family was murdered by the Nazis. He lived in hiding until being taken to France on a train full of children by the Red Cross. In 1951, at the age of 16, he immigrated to Israel, alone. He served as an officer in all the wars from the 1956 campaign in the Sinai Peninsula to the first Lebanon War in 1982. In 2008, he was injured by an explosive device placed at the entrance to his home by a radical right-wing activist.

Sternhell’s book "The Birth of Fascist Ideology" has been translated into seven languages. In awarding him the 2008 Israel Prize in Political Science, the judges said his studies had brought about significant change in the scientific community, in the concept of ideological movements in general, and radical ones in particular. "The things he says, even when their tone is critical, stem from a deep commitment to the state and society in Israel," the judges added. The panel’s words may have been a veiled reference to his comments 18 years earlier to the now defunct Davar newspaper: “Only someone willing to crush [the West Bank settlement of] Ofra with tanks will be able to stop the fascist flood threatening to drown Israeli democracy.” In April, Sternhell was elected to the American Academy of Arts and Sciences. In the interview, Sternhell presents to Israeli society an apocalyptic forecast such as canceling elections in Israel. History teaches us that often what seems today as an apocalypse later becomes the reality.

“Golan was right in every word he uttered,” Sternhell said at the outset of our conversation. “At the start of the previous century, anti-Semitism served as xenophobia. Today, hatred of the other serves the same role for the radical Jewish right in Israel. Fascism started developing as an extreme manifestation of violating the universal and ethical values of enlightenment and its political expression: liberalism, democracy and human rights. In the view of the radical Israeli right — the HaBayit HaYehudi party, the radical wing of the Likud, [Yisrael Beitenu Chair Avigdor] Liberman and his people — adherence to enlightened values is childish. Therefore, hating the Arabs and abusing foreigners and refugees is permissible.

“The right sees liberal democracy as a danger to the people and the state and that’s why it strives to undermine it. For them nationalism is natural, whereas citizenry is artificial and that’s why it can be revoked. That is what Vichy France did in the 1940s when it adopted race laws and revoked the equal civil standing of the Jews, even of those whose grandfathers were born in France and fought in its wars.”

The full text of the interview follows.

Al-Monitor:  Are we on the verge of fascism or perhaps we’re already there?

Sternhell:  It’s a gradual process. We have yet to cross the red line, but we are dangerously close. We are at the height of an erosion process of the liberal values on which our society is based. Those who regard liberal values as a danger to the nation, the homeland and the Jewish state are the ones currently in power. They are striving to delegitimize the left and anyone who does not hold the view that conquering the land and settling it through the use of force are the fundamental foundations of Zionism. That’s why universal values and universal rights are enemies of the state, in their view.

Al-Monitor:  What is the significance of this process?

Sternhell:  For people like [Education Minister] Naftali Bennett and [Justice Minister] Ayelet Shaked [both of HaBayit HaYehudi], democracy is the rule of the majority. The next step is rule of the Jewish majority, since Arabs do not belong to the Jewish nation but rather to an artificial body known as “a community of citizens” who has no right to determine existential issues. After that, elections can be done away with altogether because we are in a constant state of emergency. The Israeli right operates by frightening those who don’t think like it does. Look what Minister Yuval Steinitz [reportedly] said — that if the comments of the deputy chief of staff had been made by a colonel, he would have been discharged from the army.

Those who deny the enlightenment of the past 250 years object to the notion that at any time and in any place, by virtue of his very being, man is a cognitive creature; that's why he is a free creature equal to all other human beings. Already in the second half of the 18th century there were those who claimed that the only true rights were historic rights. The Jewish [political] right claims that our ownership of the land is defined in unique historic terms and that’s why the Palestinians do not have democratic rights.

Al-Monitor:  Were you surprised by the findings of the Israel Hayom newspaper poll indicating that 59% of young Israelis [only Jews] identify with the right?

Sternhell:  This is a natural outcome of the demographic growth of the various Orthodox groups and the chauvinist education provided by the school system. I'm surprised the figure of those identifying with the right isn’t higher — given the general climate in Israel, the naturalness of the colonial situation, the unquestioning trampling of Palestinian rights and the placing of the army at the beck and call of the settlers.

Al-Monitor:  Given the positions adopted by the Labor Party and its possible decision to join the right-wing government, is there any future for the Israeli left?

Sternhell:  Since [the right came to power in] 1977, the left wing of the Labor Party — the conformist left — has been following in the footsteps of the right in order not to be “cut off from the people.” The drift to the right is becoming more pronounced. The establishment left — which is more center than left — is not scared by the occupation and the settlements and it also thinks there’s no solution to the conflict. In terms of an overall national strategy, the Labor Party is close to Netanyahu and will not have any trouble joining his government. This will lead to a moral collapse and also hasten the demise of the left.

Al-Monitor:  Absent domestic pressure, can foreign pressure stop the occupation and the flourishing nationalistic trends that support it?

Sternhell:  Heavy international pressure can have a welcome effect on negotiations with the Palestinians and on preventing the disaster of a binational state, but not on stopping the destructive trends within Israeli society. This can only be done by Israeli society itself.

Al-Monitor:  Do the growing power of the right throughout Europe and Republican presidential candidate Donald Trump’s rise signal that fascism is moving center stage?

Sternhell:  There is no methodological reason to assume that fascism and Nazism belong to the era between the two world wars and were buried forever in 1945. These phenomena are part of Western culture and could resurface, especially in times of crisis. The neoliberal economy and globalization hurt salaried workers in the West and the waves of immigration are threatening the unique culture of European society. Trump proves once again that anything can happen anywhere, and everyone is capable of everything.

The central ideological structures of fascism are evident to anyone wishing to see them. In the previous century, fascist movements expressed their positions openly and forcefully. Today, those who challenge core liberal values and strive to eliminate them obfuscate their positions. That’s why we must deduce one thing from another and activate our imagination to identify the threats.