How politics is redefining 'left' and 'right' in Israel

Israel's political right and left were once defined by their approach to the Palestinian issue, but now the distinction is being applied to almost every area of debate. 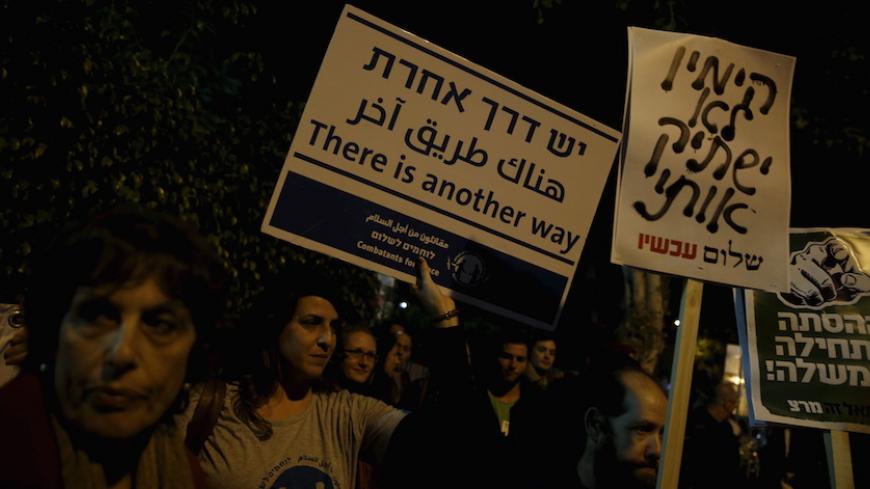 The brouhaha over the speech by Israel Defense Forces Deputy Chief of Staff Yair Golan — which continues to reverberate even after Prime Minister Benjamin Netanyahu declared on May 10 that it is "behind us" — proves that something has gone deeply wrong with the traditional division between Israel's political right and left.

Golan picked a problematic day on which to make his comments, May 4, the eve of Holocaust Remembrance Day, and his hard-hitting comparison between 1930s European Nazism and current trends in Israeli society stung. The remarks themselves should have been a matter of course in the kind of democratic society that Israel aspires to be.

Golan sought to warn against such phenomena as the July 2015 arson attack against a Palestinian family in the West Bank village of Duma and against crimes of hatred and racism, stating, "Nothing is easier and simpler than bestial behavior, moral corruption and self-righteousness. On Holocaust Remembrance Day we would do well to discuss our capacity to uproot from within us the budding indications of intolerance, of violence and of self-destruction that pave the road to moral decline." Does the Israeli right not share these sentiments as an expression of a democratic philosophy?

The question that should have arisen — why not a single right-wing politician, except for Defense Minister Moshe Ya'alon, defended Golan's comments or at least his right to make them — did not. Golan was immediately labeled a leftist, reflecting the blurring of the traditional dichotomy between right and left in Israel, which since 1967 had always focused on the issue of the occupied territories.

The two-state vision, as opposed to a one-state vision of Greater Israel and continued Jewish settlement in the territories, was for years the heart and soul of the argument between the left and right. The two sides began redefining themselves as the diplomatic process between Israel and the Palestinians petered out, as the public and diplomatic discourse moved away from the core issue of resolving the Palestinian problem and as more Israelis became convinced that there is no negotiating partner on the other side.

With Yesh Atid Chair Yair Lapid and Zionist Camp leader Isaac Herzog, the representatives of the political center-left, hardly mentioning the Palestinian issue in their attempts to convey right-wing leanings for electoral purposes, the confusion between what is left and what is right has grown. At the same time, the definitions espoused by politicians of what is left and what is right are gradually moving into other spheres, for example, the legal system.

Legislation targeting the Supreme Court, which began to appear in 2009 with the formation of Netanyahu's second government and has flourished in the years since, has become a major element in the definition of right versus left. The legal system, the Supreme Court in particular, has been tagged as leftist, and anyone coming to its defense is immediately labeled as being affiliated with the left, and vice versa. This developed in recent years and has absolutely nothing to do with the Likud movement, which for years touted the supremacy of the rule of law alongside many other liberal principles. These principles co-existed peacefully with such ideas as the Greater Land of Israel and opposition to negotiations with the Palestine Liberation Organization.

Former Likud government Ministers Dan Meridor and Benny Begin, the so-called Likud princes (because of their political lineage), paid with their Knesset seats for their defense of the nation's top court in the face of proposed legislation by their party and its rightist sidekick, HaBayit HaYehudi.

Protecting minorities and preserving the rights of Israel's Arab citizens was also a cornerstone in the system of beliefs espoused by the spiritual leaders of the Israeli right, Ze'ev Jabotinsky and former Prime Minister Menachem Begin. As head of the opposition, Begin opposed the martial law imposed on Israeli Arabs in the 1950s and 1960s and always fought for civil equality and individual freedoms. This did not, however, prevent him from advocating for the Greater Land of Israel and being a staunch believer in the settlement enterprise.

These days, it is obvious that many lawmakers and government ministers on the right portray the country's almost 1.7 million Arab citizens as traitors and a threat in order to differentiate their views from those on the left. This process takes place every hour of every day and has a deep impact on Israeli society. For example, that Zuhair Bahloul, an Israeli Arab, represents Labor in the Knesset is constantly used by the right as a cudgel against the party. What, however, is more natural than the affiliation of an Arab Knesset member with a major party like Labor?

Thus, with Israel's prime minister warning that Arab voters are being bussed to the polling stations on election day in March 2015, and Israeli Arabs being branded traitors in the recent wave of terror attacks, attitudes toward Israeli Arabs are also redefining right and left.

Back to Lapid. The reaction of the Yesh Atid chairman to Golan's comments is worth noting. Lapid wrote on his Facebook page, "The deputy chief of staff was wrong. Maj. Gen. Golan is a good man, but even good people make mistakes. There is nothing in Israel 2016 that is reminiscent of Germany in the 1930s. The processes that led to the annihilation of the Jews are in no way or shape similar to our struggle for existence against our enemies."

Lapid chose to focus on Golan's “blunder” in linking the Nazis to the current era in Israel, but avoided any expression of support for the crux of his comments and evaded any identification with Golan's concerns about racism, hatred of the other and the violence of the extreme right. Lapid, whose every comment is measured by public opinion polls and analysis of deep-seated trends in Israeli society, doesn't want to be considered a leftist, God forbid. Defense of the deputy chief of staff risked his being portrayed as a left-winger, so Lapid joined the ranks of the condemners.

On the other side of the political spectrum, HaBayit HaYehudi Chairman Naftali Bennett, among the first to denounce Golan, continued attributing political overtones to the affair into the following week. In a speech he delivered May 12 at the annual International Bible Contest, he said, "I appeal to all of us: We love our state, so let's stop this festival of self-flagellation." What Bennett meant was that the left was beating itself up in the style of Golan, whereas the right sees no reason to apologize.

One thing is clear from this whole affair. The right sets the tone of the public discourse, sets the parameters and defines the nature of the argument with the center-left. In fact, the center-left is being dragged into the confines of the new definitions of the discourse instead of adhering to its basic credo: separation from the Palestinians.