Do you really need to know the new Turkish PM?

The appointment of Turkish Transportation Minister Binali Yildirim as prime minister implies that the office is about to be mothballed. 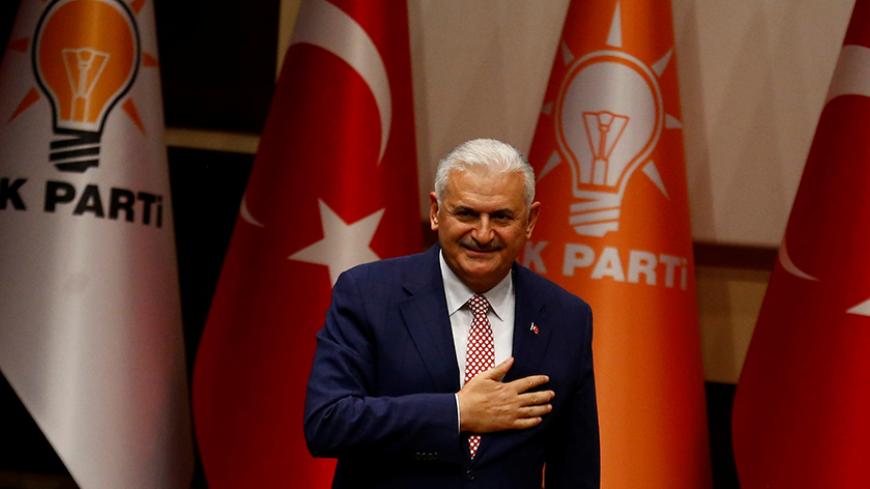 Turkey's next prime minister and incoming leader of the ruling Justice and Development Party Binali Yildirim greets party members during a meeting in Ankara, May 19, 2016. - REUTERS/Umit Bektas

Turkey's ruling Justice and Development Party (AKP) declared its new chairman on May 19: Transportation, Maritime Affairs and Communications Minister Binali Yildirim. Party delegates still need to "elect" Yildirim to the position May 22, but that is only a formality. Once he becomes party chairman, Yildirim will form a new Cabinet, get President Recep Tayyip Erdogan's approval and begin his job as Turkey's new prime minister early next week.

So who is Binali Yildirim? Born in the conservative eastern Anatolian town of Refahiye in 1955, Yildirim is a maritime engineer by training. He worked many years in various public transportation companies before entering politics with the AKP in 2001. From 2002 to 2014, Yildirim served as the transportation minister and cultivated an image as a successful builder of major projects, including new highways, high-speed trains, tunnels, airports and bridges. The public knew him as the minister wearing a hard hat.

What made the AKP's star transportation minister even more significant, however, has been his increasingly close relationship with Erdogan. When Yildirim reached the end of the AKP's three-term limit in 2014, Erdogan did not let him go. Yildirim first ran for mayor in Izmir, but failed to win in that resolutely secular city. Then Erdogan appointed him as one of his advisers — and, as many people believed, kept him as "backup" against Prime Minister Ahmet Davutoglu.

In 2015, Yildirim again entered the Cabinet as the minister of transportation, maritime affairs and communications. Three months ago, people who know Ankara well were already hearing rumors that Erdogan was growing unhappy with Davutoglu, and would replace him with Yildirim — which turned out to be the case.

But why did Erdogan actually replace Davutoglu with Yildirim? The simple answer is that Davutoglu did not prove to be loyal and obedient enough. As exposed in the mysterious blog that triggered Davutoglu's resignation, the president and the prime minister had their differences — not huge gaps, but nuances — on issues such as freedom of speech, relations with the West and rule of law. Davutoglu, after all, was a former professor of politics and a self-confident intellectual, who had his own views on Turkey's political matters. He also had a charisma of his own, with a small but notable band of "Davutoglu-ists," which included some of the more bookish and worldly figures in the AKP universe.

In contrast, Yildirim is a technocrat without any visible position on controversial issues. He has little charisma and no cadre of "Yildirim-ists" behind him. He is famously a slow talker, though one who is witty about it. Yildirim is the perfect figure to "work a lot, but talk little," as a pro-Erdogan pundit put it when describing the party's expectations from the new prime minister.

That is why some Turkish political commentators have suggested recently that with Davutoglu's departure and Yildirim's arrival, the very post of the prime minister of Turkey, as it came to be known for almost a century, has been put into mothballs. From now on, prime ministers will only be secretaries to the president, in whose hands all political power will be concentrated.

The office of prime minister could be dissolved soon if Erdogan gets the "presidential system" he wants under a new constitution. One of the complaints about Davutoglu was that he gave only lip service to this transition. Yildirim is expected to be more devoted to the goal, which will amount to the abolition of his own seat.

It is quite safe, therefore, to say that Yildirim's prime ministry is just another step in a trend that has dominated Turkish politics in the past decade: the constant concentration of power in Erdogan's hands. This dynamic was visible even in the May 19 speech of AKP spokesman Omer Celik, who declared Yildirim as the new party chairman. AKP cadres and supporters applauded the good news. But the strongest applause came when Celik, with a heightened emotion, hailed "our leader" (Erdogan) and affirmed, "There is not even a millimeter of a distance between our president and the AKP cadre."

The reality is that there were perhaps some millimeters of distance between the president and the former prime minister. With the new prime minister, however, the gap is fully closed. Now the prime minister, the party and, in fact, the state have become the same thing under Erdogan.