Turkey’s opposition is protesting Prime Minister Recep Tayyip Erdogan’s campaigning for the presidency without resignin from his current privileged position. 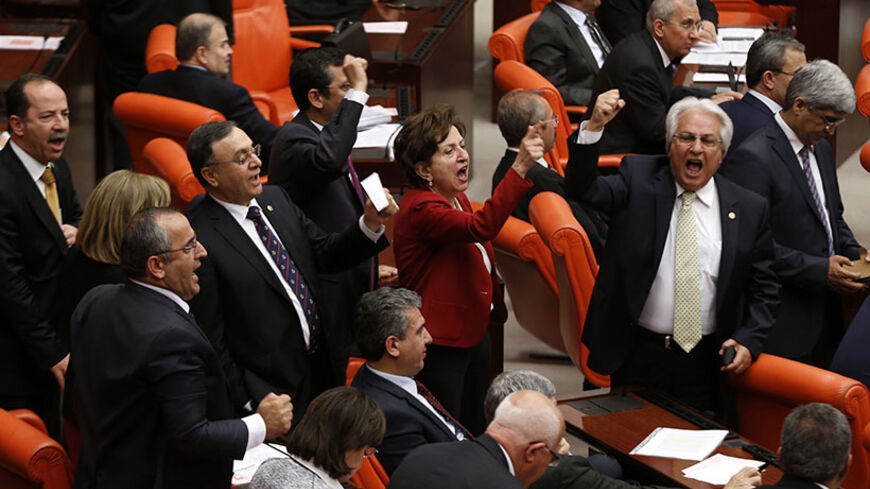 Members of parliament from Turkey's main opposition Republican People's Party shout slogans against the ruling Justice and Development Party during a debate in Ankara, March 19, 2014.

Since Turkish Prime Minister Recep Tayyip Erdogan announced his candidacy on July 1 to run in the presidential race — the first to take place by public vote — the opposition started to focus its objection to his candidacy on legal grounds.

Gursel Tekin, the main opposition Republican People’s Party (CHP) deputy chairman, said on July 2, "Erdogan should resign as prime minister the moment his candidacy for the presidency becomes definitive, which is July 3 at the latest. It is not ethical for the prime minister to benefit from the resources of his office while the other two candidates will only rely on their privately raised funds. We expect the prime minister to resign as soon as possible.”

Yet, the opposition insists the law is clear that all candidates should enter the race on equal grounds. Erdogan would violate the equality rule for all candidates by using his privileges as prime minister while campaigning for the presidency.

Vural recalled that Erdogan asked his three Cabinet members to resign when he nominated them in the March 30 local elections. Sadullah Ergin, the former justice minister who ran for the mayor’s office in Antakya; Fatma Sahin, the former minister of family and social policies who ran for the mayor’s office in Gaziantep; and Binali Yildirim, the former minister of transportation, maritime and communication who ran for mayor of Izmir all resigned from their ministerial duties. Erdogan himself stated that it would not be ethical for them to take part in the local elections, while the Supreme Election Board (YSK) ruled there was no need for them to resign.

The opposition now argues that even if the YSK issues a similar decision for Erdogan’s candidacy, they will take this matter to court.

In the country’s first presidential elections by public vote, the candidates will raise funds from individuals or corporations to run their campaigns. Legal analysts wondered to Al-Monitor how many individuals will have the guts to donate to the opposition candidates without fear of repercussion from the ruling party. They refer to examples from the past in which the Erdogan government used tax audits to intimidate businessmen. Police accompanied the tax-audit raids of three companies within Turkey's largest industrial group, Koc, following through on Erdogan’s threats against those he held responsible for the Gezi Park events. Erdogan also asked his followers repeatedly over five months, starting in September 2008, to boycott the Dogan Media Group newspapers for taking a critical approach to his policies. The group was fined nearly $500 million in February 2009 for an alleged late tax payment.

Hence, there could be an institutional disadvantage for the other two candidates, Ekmeleddin Ihsanoglu and Selahattin Demirtas.

While there may be no obvious solution to resolve this matter, the opposition must reach out to the people to build a constituency for their candidate. After all, Erdogan may be contradicting himself by choosing not to resign as prime minister, but this should be no surprise in politics.

The second legal debate about the prime minister’s candidacy does, however, promise a challenge for Erdogan if he is elected president. There is a long and complicated controversy over whether the president benefits from parliamentary immunity. Turkey’s first constitution, that of 1924, states that the president is immune, whereas the present constitution does not contain such a clause.

As a result, the opposition is threatening to bring case after case — starting with the December 2013 corruption and bribery scandal — if Erdogan wins.

It is, however, only fair to forecast that Erdogan will not care much for the opposition’s attempts to bring him to trial as he ramps up for the elections.