Turkey was expecting representatives from "all" countries to attend the first World Humanitarian Summit in Istanbul. 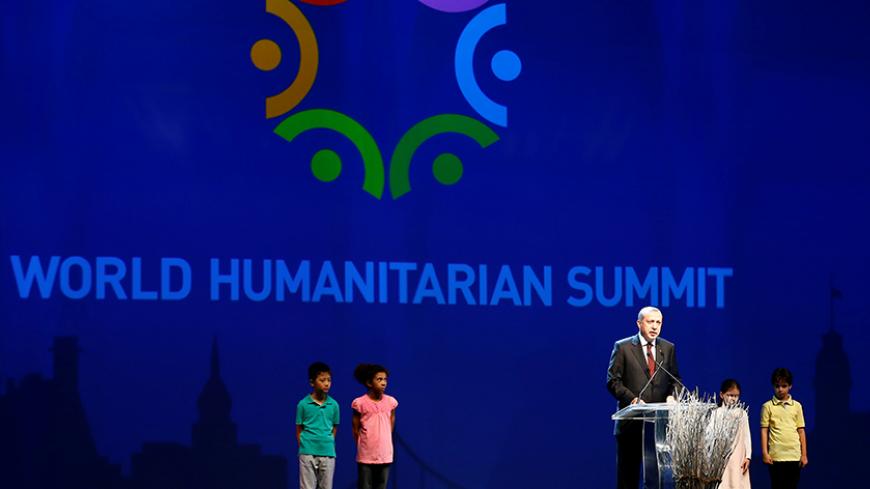 Imagine throwing a huge fundraiser. You proudly plan it for months. You invite all the must-have, high-society elites. On the big night, the place is packed, but at the last minute the big spenders — the ones you really want — don't show.

Turkey hosted the first UN World Humanitarian Summit on May 23-24 in Istanbul. Former Deputy Prime Minister Yalcin Akdogan had predicted in January that "all state and government heads will be coming to Turkey.”

But they didn’t come.

Official figures from the United Nations were impressive, showing that 9,000 people from 173 countries attended, including about 1,000 Turks, along with 900 media members. The number of countries represented was larger even than the G-20 summit held Nov. 15-16 in Antalya, Turkey.

But the political heavyweights were noticeably absent this week: Britain, France and China were not represented at all, and the United States and Russia sent delegates at the undersecretary and deputy minister levels. It was no surprise that Russia didn't send a high-level emissary, given its frosty state of relations with Turkey, but many were hoping the US president would attend.

Zeynep Gurcanli of the daily Sozcu attributed the low-level US representation to the “latest crisis between Ankara and Washington over assistance to Syrians." The US Agency for International Development announced earlier this month that it had suspended assistance to Syrians in Turkey because of corruption.

About 50 presidents, prime ministers and ministers or their deputies attended the summit. Participation from Europe was limited; most of the European countries that attended were those affected by the Syrian refugee wave. Other participants were generally friends of President Recep Tayyip Erdogan or leaders of countries that Turkey supports politically and financially.

Why was attendance lower than expected?

Al-Monitor also asked retired ambassador Onur Oymen, now a senior member of the opposition Republican People's Party, why the rich countries had not shown interest. He said, “We know why Putin didn’t come. Others might have been worried about terror. Actually, not all countries regularly participate in such summits. Their attendance depends on the topic discussed.”

Oymen added, "When you go to a humanitarian assistance summit, then your [financial assistance] role is exposed. Europe has always lagged behind assistance targets. This might have affected their decision to stay away. What can they say at such a summit? How would they explain their reluctance to give 1% of their [gross domestic product (GDP)] as assistance? Rich countries are not helping enough. This may have kept them away. Turkey, on the other hand, is a country that gives a high level of foreign assistance when compared with its GDP.”

Erdogan noted in his opening speech that Turkey is hosting more than 3 million Syrian and Iraqi refugees. “Whether Syrian or Iraqi, we will never close our doors to people,” he said. Erdogan pointed out that Turkey has already spent $10 billion on Syrian refugees and plans to send $6.4 billion this year in humanitarian and development aid to more than 140 countries. He called on developed countries to do their part.

But some of the countries that most needed to hear his appeal weren't there.

In a press conference at the end of the summit, Erdogan criticized the G-7 countries (United States, Canada, France, Germany, Italy, Japan and the United Kingdom) for not participating, saying, “It is sad that leaders of G-7 countries, other than [German Chancellor Angela] Merkel, have not attended.” He noted that Turkey has proposed setting up a new city in northern Syria. Developed countries have been briefed, but question the security of such a project. Erdogan added, "I say we will declare no-fly zones and take security measures. We don’t need to fear terror organizations.”

Referring to the 3 billion euros ($3.3 billion) the EU had pledged for the refugees, Erdogan said, "We see that their promised support has not materialized. My colleagues say 1 billion euros will arrive before July. Turkey is not asking for charity. This support is for the people in the camps.”

Erdogan concluded his press conference by warning that unless the EU takes steps before June 30 to abolish visa requirements for Turks, the parliament will not approve the refugee readmission agreement. (Erdogan did not mention that parliament had already approved that agreement May 3.)

Doctors Without Borders pulled out of the summit at the last minute, saying it had lost hope that the event would tackle the weaknesses of humanitarian assistance and disaster relief activities. The group was right. The two-day summit did not adopt measures that promise relief for the humanitarian drama the world is experiencing, because leaders of countries that could contribute the most to such a solution were not in attendance.