Experts argue that although Turkish President Recep Tayyip Erdogan is getting support from NATO and the European Union, he can never be part of the West because his Islamist outlook prevents him from adopting Western values. 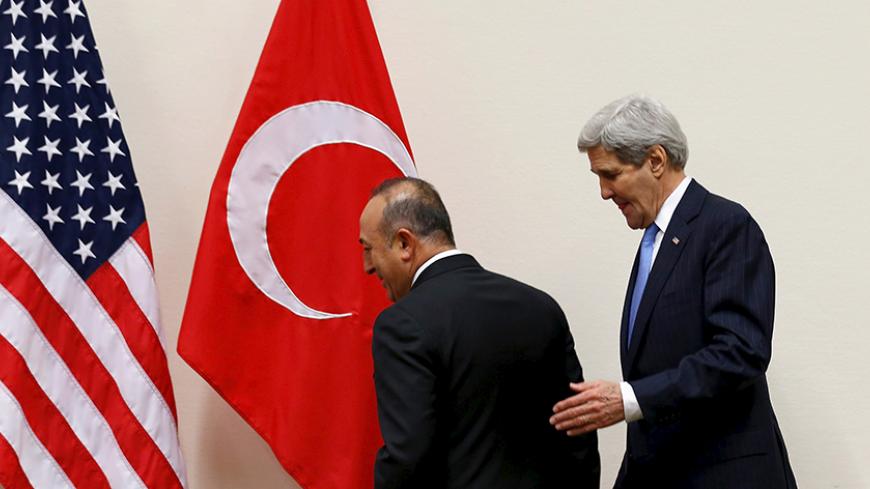 It is no secret that Turkey’s ties with the United States and Europe have been less than warm in recent years. Given his innate Islamist orientation, President Recep Tayyip Erdogan has made his distaste for all things Western apparent since coming to power. The West, in turn, has viewed Erdogan with suspicion, based on his rejection of Western democratic and social values, and his barely veiled efforts to shift Turkey’s strategic focus toward the Islamic world.

The downing of the Russian Su-24 fighter jet by the Turkish air force and the unprecedented tensions this has caused between the two countries appear set now to change that. This incident has underscored Turkey’s reliance on NATO, despite the inbuilt distaste of Turkish Islamists for the alliance.

The need, however, to counterbalance the potential strategic threat Russia poses to Turkey’s national security interests has left Erdogan with few choices other than trying to re-energize ties with the United States and Europe.

The United States and Europe are also more amenable toward Erdogan today because of their need for his support in combating the Islamic State (IS) in Syria and Iraq, and in addressing the refugee crisis emanating from the Syrian conflict.

Following a lapse of 11 years, Turkish and European leaders met in Brussels last weekend for an intergovernmental summit aimed at addressing the refugee crisis and to breathe new life into dormant Turkish-European Union ties.

At the opening of the summit, Prime Minister Ahmet Davutoglu even said that “Turks are a European nation,” a contention that has been questioned in the West due to the Islamist-based policies of the ruling Justice and Development Party (AKP).

“I want to give you an open message from Ankara. We are a European nation. The fate of the continent is our common subject and Turkey is prepared to do everything it can in this regard,” Davutoglu said.

The summit resulted in a commitment by the EU to give Ankara 3 billion euros ($3.2 billion) to keep the Syrian refugees in Turkey. The statement issued after the summit also underscored an intention to reactivate Turkey’s stalled EU membership negotiations and to waive the visa requirement for Turks traveling to Europe, provided certain criteria are met by October 2016.

Murat Yetkin, the editor-in-chief of Hurriyet Daily News, said this summit also gave “an additional upper hand to Turkey in its relations with Russia.” He also argued that a Russia “already struggling under sanctions over the situation in Ukraine and with a damaged reputation in Syria would chose not to further confront a ‘fully’ NATO-backed Turkey.”

“This is not just a violation of our airspace, but it also means that NATO’s airspace was violated,” he added, signaling to Moscow, as NATO’s secretary-general stood next to him, that Turkey has the backing of the Western alliance. Stoltenberg, for his part, repeated that NATO would defend Turkey against outside aggression.

“The available information including evidence from Turkey and our own sources indicates the Russian aircraft violated Turkish airspace. We also know that the Turks warned the Russian pilot multiple times before the airspace violation to which the Turks received no response,” State Department spokeswoman Elizabeth Trudeau told reporters during her daily press briefing Nov. 30.

The United States and Turkey’s other NATO allies have signaled, nevertheless, that they do not want an escalation of the crisis with Russia, which might draw them in militarily. They are arguing that this is essentially a problem between Ankara and Moscow and must be resolved diplomatically at that level.

He added, however, that unofficial leaks to the media and some remarks by Western officials indicated a deep annoyance with Turkey for downing the Russian jet at a sensitive time like this.

“NATO is a place where everyone is expected to act with the utmost responsibility. Therefore there is bound to be irritation with the Turkish action. But Europe needs Turkey today as it tries to cope with the refugee crisis, so everyone is acting politely toward Ankara,” Unsal said.

The downing of the Russian jet came at a time when France is trying to broker an international coalition against IS that also includes Russia as a key actor.

This incident has totally changed the traditionally friendly tone in ties between Ankara and Moscow, which were once considered exemplary for keeping political differences in check for the sake of vast economic interests.

Turkey’s NATO membership may play a deterrent role but Moscow appears unwilling to let this incident pass without any cost to Turkey. The economic implications for Ankara following the shooting of the Russian jet have also started to become clearer.

Turkey’s enormous economic interest in Russia is being used by Moscow as its principal weapon for “punishing Turkey,” even if this comes at a cost to itself, too. Thousands of Turkish businessmen who do business with Russia are deeply concerned over losses they have already started to incur because of Russia’s economic sanctions against Turkey.

Clearly disturbed by the potential political and economic implications of this incident, Erdogan is trying — uncharacteristically for him given his general abrasive manner in international relations — to mollify Moscow through statements of regret, while expressing a desire to reduce tensions through dialogue.

Russia’s national pride, however, appears to have been injured irreparably. Putin is demanding an unqualified apology from Turkey, which both Erdogan and Davutoglu have said publicly will not be forthcoming. Putin rejected Erdogan’s call for a meeting in Paris earlier this week, on the sidelines of the UN climate conference, because of this.

Instead of trying to reduce tensions, he raised the stakes by arguing that Turkey had shot down the Russian jet to protect oil supplies from IS.

Repeating his claim that Turkey is aiding and abetting IS by allowing it to sell oil through Turkish territory, Putin added that Turkey has also been supporting Islamic terrorists in the Northern Caucasus.

The support Ankara is receiving from its Western allies may be comforting to Erdogan and Davutoglu, but it is clear that this will also require them to overcome differences with the West over Syria. The main problem area for Turkey will be to relegate the support it is giving to groups in northern Syria fighting the Bashar al-Assad regime to the background and focus exclusively on combating IS.

In doing so, it will also have to come to terms with the support the West is giving to the Syrian Kurds and their Democratic Union Party (PYD), which is fighting IS with air support from the US-led coalition. Ankara says the PYD is a terrorist organization because of its links to the Kurdistan Workers Party.

Turkey’s attempts to “re-energize” its ties with the EU, on the other hand, can only go so far given Erdogan’s undemocratic policies that continue to unfold in Turkey, starting with his escalating war against the free press.

Despite Davutoglu’s assertion that Turks are a European nation, retired Ambassador Unal Cevikoz believes that Erdogan and the AKP can never move to be part of the Western world because their basic makeups prevent them from adopting Western values.

“Fulfilling the full requirements of being a member of NATO or respecting EU criteria would leave them at odds with their grass-roots supporters. Internalizing Western values also contradicts their essential makeup,” Cevikoz told Al-Monitor. “Turning to the West now is only the product of circumstances, because they need Western support. It is unlikely, however, to become a lasting thing,” he added.