An autopsy of the new Turkish government 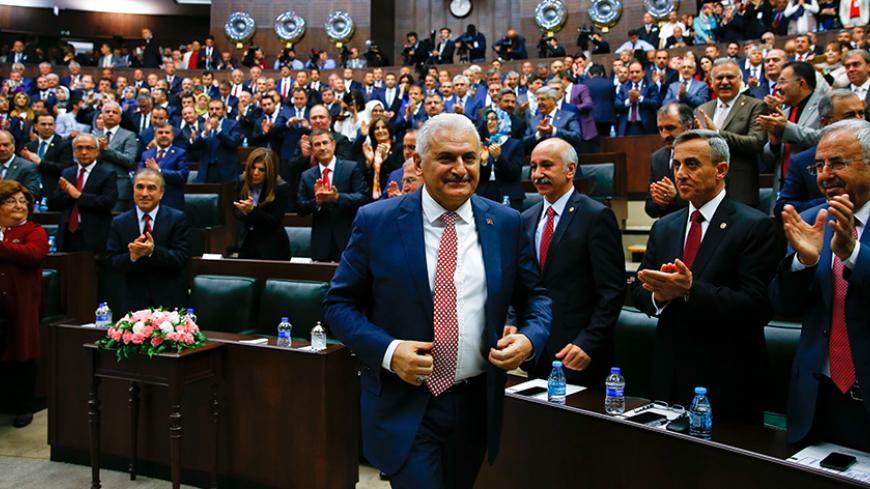 Turkey's new Prime Minister Binali Yildirim is greeted by members of parliament from his ruling Justice and Development Party as he arrives for a meeting at the Turkish parliament in Ankara, May 24, 2016. - REUTERS/Umit Bektas

The new Turkish government under Prime Minister Binali Yildirim, the stalwart loyalist to President Recep Tayyip Erdogan, was announced May 24. As expected, the government consists entirely of Erdogan faithful. What is surprising is that some ministers who were predicted to lose their portfolios actually stayed on.

Among those who kept their post is Mehmet Simsek, the deputy prime minister for economic affairs who served as finance minister in Erdogan’s governments. Another is Deputy Prime Minister Lutfi Elvan, who was expected to be penalized because of being close to former Prime Minister Ahmet Davutoglu. Although he is no longer the deputy prime minister, he is a member of the government as Minister of Development.

Numan Kurtulmus and Suleyman Soylu, who lost their seats in the Justice and Development Party (AKP) executive board at the party congress on May 22, remained in the government.

Bozkir has no Islamist background. On the contrary, he comes from the secular elitist establishment of the Turkish Foreign Ministry. Despite his somewhat clownish performance in two Davutoglu governments, it seems he could not win the confidence of the president and his loyalist new prime minister.

Bozkir is replaced by Omer Celik, a former culture minister, the party’s spokesperson and a confidant of Erdogan who has been close to or in his inner circle since the mid-1990s. Celik is considered the pseudo-intellectual of the party who aims for the post of Foreign Ministry. His new post as EU affairs minister should be seen as a reward for his ambitions.

Nobody should be fooled by Simsek's survival. Although he ostensibly was kept in the government as deputy prime minister, that is in order to satisfy foreign investors and foreign markets. A former Merrill Lynch portfolio manager, his presence in the Turkish government is regarded as a safety valve for the international banking and financial circles following the departure of his mentor, the real darling of that milieu, Ali Babacan.

Mehmet Simsek is in the Yildirim government just to dispel the worries of international financial markets. Otherwise, it is well-known that he possesses no decision-making power in economic and financial affairs. That function is entrusted to the new Deputy Prime Minister Nurettin Canikli, a die-hard Islamist known for his peculiar positions, which are not compatible with the overall outlook of international markets. The choice of Canikli as the deputy prime minister and new economy chief suggests ideological priorities will determine economic and financial decisions. It is no coincidence that the further lowering of interest rates by the new governor of the Central Bank, in conformity with Erdogan’s opinion on interest rates, occurred on the day of the announcement.

How the international financial markets will respond to the new government now that the economy and finance will be in Canikli's hands remains to be seen.

Without a doubt, Akdogan is the most interesting person among those fired. His loyalty to Erdogan had never wavered. He did nothing that had not been endorsed by Erdogan, and he was never a confidant of the outgoing Davutoglu. He remained on Erdogan’s side even when there were slight cracks between the president and the former prime minister.

Akdogan's sacking has nothing to do with the mistakes he committed by violating Erdogan’s trust. He is out because he represents a policy of Erdogan’s that should be left to oblivion — the Kurdish peace process. Akdogan, the hawkish voice of Erdogan’s team on the Kurdish issue, fell victim to, or rather was sacrificed for, the even more hawkish policies that the president and new government are now pursuing.

Akdogan's ouster is also the harbinger of a much more dramatic step: Hakan Fidan, Turkey's and Erdogan's intelligence chief of Turkey, most probably will be replaced by someone to be assigned by Interior Minister Efkan Ala. It was Ala who masterminded the security operations against all those seen as harmful or hostile to Erdogan’s interests in the security establishment, thus he is a trustworthy civil servant.

Erdogan had once described Fidan as “the holder of his secrets, “his black box.” Yet Fidan did waver and fluctuate between Erdogan and Davutoglu. He left his position as head of the National Intelligence Organization in February 2015 and tried to enter parliament (and presumably the government) under Davutoglu. Although Erdogan conviced Fidan to go back to the seat he vacated, his name has not been in circulation since. Fidan apparently has lost his credibility in Erdogan's eyes.

Meanwhile, Feridun Sinirlioglu, the undersecretary of the Foreign Ministry,  could be the highest ranking official to be replaced.

Sinirlioglu also tried hard to prove that he is an efficient and faithful executor of Erdogan’s policies. But within the AKP, a witch hunt is underway targeting Sinirlioglu and accusing him of being “Israel’s man.” Sinirlioglu had only one ambassadorial mission in his career and that was in Israel. He is also the architect of the recent and silent diplomatic contacts to repair the relationship with Israel. Although he has taken no steps without Erdogan’s endorsement, his secularist background and resume is anathema to Erdogan's increasingly Islamist rule.

The timing of Davutoglu’s dismissal has something to do with his schedule of foreign visits. It is claimed that Erdogan was furious with Davutoglu because wherever Erdogan visited, Davutoglu took the same route 15 days later. For Erdogan, that was an ill-fated attempt to challenge him and create a picture of duality in Turkey’s leadership. The grand viziers cannot overshadow the sultans in the Ottoman-Turkish tradition. In the current case, there are rumors that Erdogan believes Sinirlioglu acted as Davutoglu’s operative.

The era of Erdgoan's uncontested and unchallengeable rule just took a new turn in Turkey. Irrespective of rumors, Yildirim’s new government is likely to undertake an overhaul of senior bureaucracy.