The one thing Israel could do to avoid another Gaza war

For the first time, an official Israeli report links the suffering in the Gaza Strip caused by the blockade and the firing of rockets into Israel. 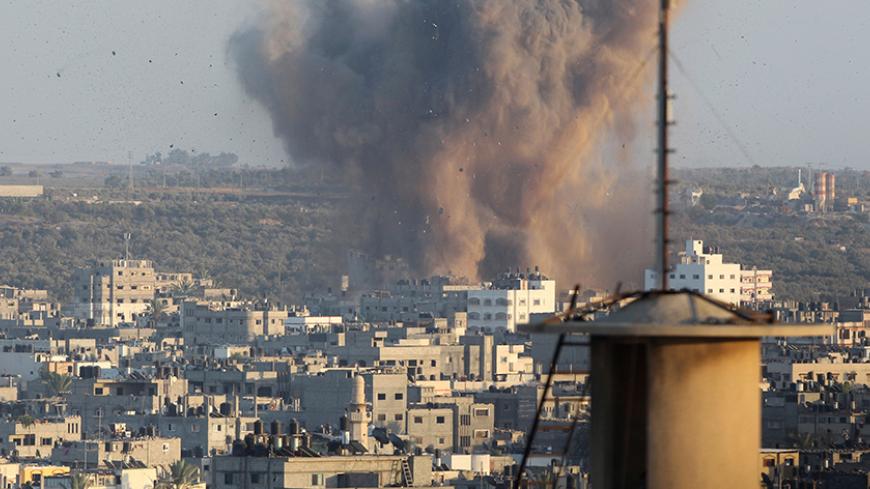 Smoke rises after an explosion in what witnesses said was an Israeli airstrike in the Gaza Strip, Aug. 20, 2014. Israel launched its Gaza offensive on July 8, 2014, and Hamas responded that Palestinians would continue confronting Israel until its blockade on the economically crippled Gaza Strip was lifted. - REUTERS/Ahmed Zakot

The report by State Comptroller Joseph Shapira on Operation Protective Edge in the Gaza Strip has not yet been published, but the initial draft, received by some 40 top defense and political figures, has already stirred up a storm. Reactions by associates of Prime Minister Benjamin Netanyahu, who pounced on the report and on the comptroller with sharp and irrelevant comments, only reinforced the troubling feelings about the summer 2014 military campaign, which the Israeli public never perceived as a great military success to begin with. Now comes the draft report, which lambasts the political and military echelons for alleged negligence and infuriating irresponsibility.

In a May 9 Al-Monitor article, Ben Caspit described the “war of generals” expected to erupt after the release of the final report. The most significant point in the comptroller’s report is his assessment that putting aside the flawed conduct of the operation and attendant decision-making, the war in Gaza could have been avoided. If the Israeli political echelon had not been shackled by outdated conceptions and basic lack of understanding regarding the significance of the Gaza blockade and its inherent dangers, many lives would have probably been spared. Senior Israeli officials who received the draft — which they described as more severe than the findings of the Winograd Commission that investigated the shortcomings of Israel’s 2006 Lebanon War — said that one of the report’s chapters deals with what Israel could have done to avert the clash.

In the days before the military campaign, there was obvious satisfaction in Jerusalem over Egypt having joined in imposing a hermetic seal on Gaza and the new regime of President Abdel Fattah al-Sisi conducting an all-out war against the tunnels dug by Hamas in Rafah on Gaza’s southern border with Egypt. The military and political leaderships failed, however, to understand one simple fact: that additional pressure on the Gaza pressure cooker would result in an explosion, as indeed it did.

Although Operation Protective Edge was the peak of an escalation that began with the June 2014 kidnapping and murder of three Israeli youths in the West Bank Etziyon settlement bloc, the root of the problem that led Hamas toward the conflict was the Gaza blockade and the desire to get rid of it at whatever the cost. When Hamas says “whatever the cost,” that includes the total destruction of extensive areas of the Gaza Strip and the lives of Gaza residents.

This is the first time since former Prime Minister Ehud Olmert imposed the closure on Gaza in June 2007 that an Israeli official will do the obvious and directly link the blockade and rocket firings at Israel. Anyone who assumes that the pressure on Gaza can be sustained relentlessly, without consequence, is either delusional or ignorant about human nature.

Hamas developed the Qassam rocket before the blockade as a deterrent against Israel and a way to attack without clashing with Israeli ground forces, but the blockade created a threat to its continued rule and forced it to launch an arms race that turned Gaza into a powder keg. Israel did not understand at the time that an extended blockade would mean subjecting Israeli residents in the south to a life in the shadow of Hamas rockets.

When the comptroller issues his final report, senior defense and government officials will probably try to blame each other for the shortcomings exposed. After the public exchange of blows, however, officials must study the thick report and take seriously the rethinking it suggests in regard to Israel’s mistaken security concept, according to which one can imprison the residents of Gaza, control the supply of food and raw materials entering Gaza, cause the deterioration of Gaza's economy and at the same time enjoy calm along the border.

This security concept was Olmert’s basic assumption when he imposed the blockade. He assumed that economic pressure would unseat Hamas and restore the Palestinian Authority and its leader, President Mahmoud Abbas, after their violent overthrow in June 2007. Nine years have since elapsed, the blockade is still in force and Hamas has only gotten stronger.

During Operation Protective Edge, Hamas fighters managed to hold their own for some 50 days in the face of a skilled and far better equipped Israel Defense Forces (IDF) army. That summer, Hamas disrupted the daily routines of millions of Israelis, from the communities on the Gaza border to the edge of Haifa in the north, threatening their lives with long-range rockets. The Israeli economy sustained serious damage. Many small businesses collapsed, and it took others months to recover.

In addition to considering the warning bells sounded by the report regarding the military's preparedness for the operation and its conduct by the army brass and the government, Israel must answer the following questions: Has the blockade of Gaza improved Israel's security or eroded it? What are the blockade's implications in terms of Israel’s international standing? Can one assume that significant economic improvements for the residents of Gaza could have saved many lives on both sides of the border fence and spared the IDF deep embarrassment? Shapira, according to those who have read the report, does not provide direct answers to these questions, but the fact that he raises them in such a clear and sharp manner hints at the direction in which he is pointing.

Publication of the full report is unlikely to force senior military or political officials to accept responsibility for their failures and resign. Former IDF Chief of Staff Benny Gantz, who comes in for the biggest share of criticism in the report, is no longer in office, while the second-most criticized figure, Prime Minister Netanyahu, is already hard at work denigrating and discrediting the document.

Although Israel appears to reject the link between the hardship and despair in Gaza and the resulting security threat to Israelis, the top leadership must take this report seriously in an effort to avoid the next war in Gaza. Hamas, in its despair and that of Gaza residents brought to their knees by the deprivation-inducing blockade, has directed its resources to fighting Israel by all means to end the blockade. Netanyahu, Gantz and the top military and political brass did not understand this — or if they did, they preferred to ignore it — but the state comptroller understands, and he has no intention of ignoring it.

On the eve of Israel’s Memorial Day, May 11, to honor its war dead, Judge Shapira has handed decision-makers an important guide that could save many lives in the future. Siege, poverty, pressure and despair are a dangerous cocktail for Israel’s security. Israel’s leadership would do well to adopt the comptroller's findings rather than fight them.