English language classes set to become next battleground in Iran 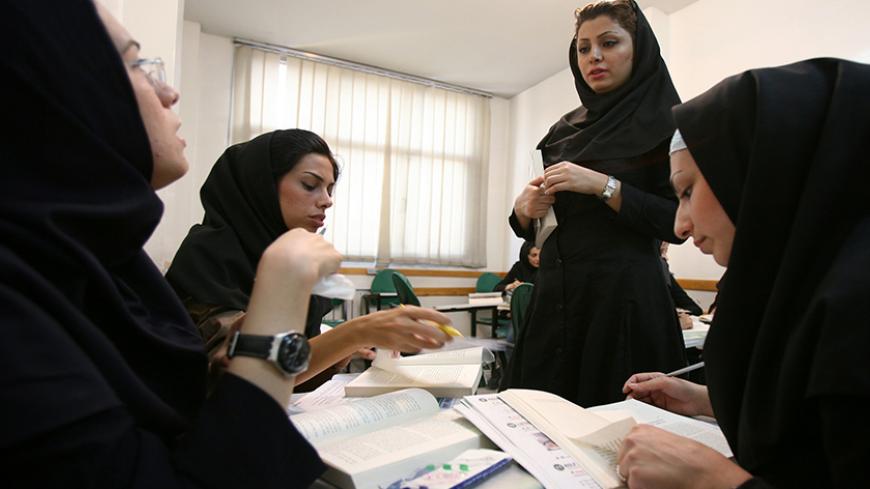 A student asks questions during class at an English institute in Tehran, Sept. 12, 2006. - REUTERS/Morteza Nikoubazl

During a May 2 speech to Iranian teachers, Iran’s Supreme Leader Ayatollah Ali Khamenei warned about the designs of an "international hegemonic system" led by the United States, Israel and other hostile countries. He said this system has designs to change the culture of Iran's youth into one that is not Islamic or indigenous. As an example of this phenomenon, Khamenei raised the issue of the promotion of English in Iranian schools.

While English language classes are mandatory for high school students in Iran, Khamenei is concerned that even some kindergartens are teaching English now. Khamenei clarified that he is not opposed to learning a foreign language, but for him "the prime issue is the promotion of a foreign language among children, adolescents and youth."

President Hassan Rouhani, who has promised more engagement with the West as a means to improve Iran's struggling economy, addressed Khamenei's comments about foreign language education during a May 4 speech.

"The other day at a meeting of the Supreme Cultural Council, comments about the supreme leader's statements were exchanged," Rouhani said. "The question was presented, ‘Why is it that in Europe students must learn two additional languages in addition to their own language but in this field we are one step behind?’" He added, "However much we can familiarize our youth with other languages of the world, we have opened a new window of science, knowledge and understanding of the world to them."

As an example of a country that has been able to use the education of a second language to its economic advantage, Rouhani brought up the case of India. "Today, because of its proficiency in English, the Indian subcontinent, with a population of more than 2 billion, appears to be greatly successful in the field of information technology."

Rouhani emphasized, "We must learn a language that will create more jobs for the future generation and strengthen our economic relations."

While these differing viewpoints between Khamenei and Rouhani are not a major political crisis, they offer a view into how the two leaders see Iran's place in the world. The Western-educated Rouhani sees an Iran that is part of the global economy, particularly with Western countries. Khamenei, who has not left the country since becoming supreme leader in 1989, has instead promoted the domestic-based "resistance economy" to address Iran's economic issues.

Since Rouhani's May 4 comments, conservative media have rallied behind the supreme leader with editorials about the need to "break the monopoly of English" language education in Iranian schools and criticized Rouhani's "simplistic assumptions" about language education.

Iranian officials also interjected into the debate. "That Rouhani sees words as a function of progress shows his lack of understanding of the philosophy of language and science," conservative member of parliament Mohammad Nabavian said May 4. "A bigger problem is that what Rouhani talks about, not only does he not have any expertise, but the consultations of the Westoxified was completely influential on him." Nabavian's remark about the "Westoxified," literally in Persian “West-struck-ness,” is a reference to Iranians who forego Iranian culture in favor of Western culture and is directed at Rouhani's Cabinet, many of whom have studied in the West.

Nabavian said that Rouhani was repeating the statements of Reza Pahlavi, the Iranian monarch from 1925 to 1941, and instead of finding controversies to distract the public, the president should focus on the "damages of the nuclear deal and the youth who have become unemployed" under his administration.