Khamenei to US Navy: Keep your drills in the Bay of Pigs

Iran’s Supreme Leader Ayatollah Ali Khamenei said that Iran would not refrain from holding military drills in the Persian Gulf. 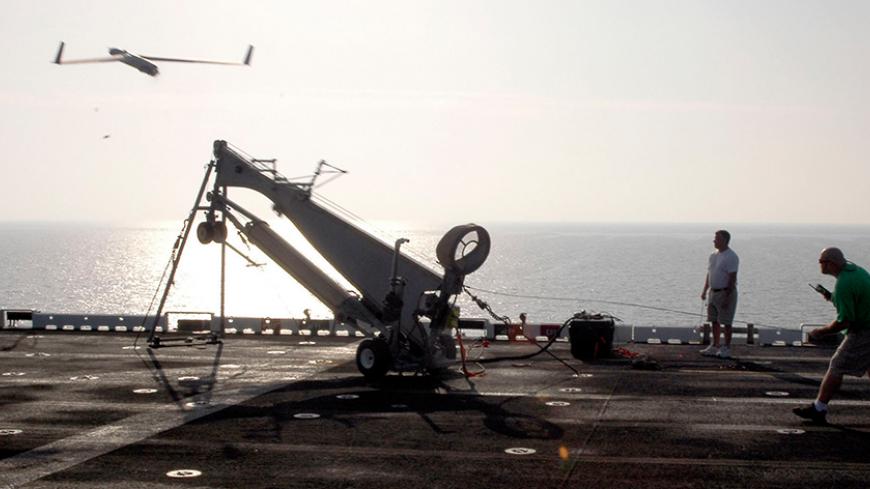 The ScanEagle Unmanned Aerial Vehicle launches from the flight deck of the USS Saipan in the Persian Gulf, Oct. 28, 2006. - REUTERS/U.S. Navy
Arash Karami
@@thekarami
May 2, 2016

During a speech May 2, Iran's Supreme Leader Ayatollah Ali Khamenei condemned the US military presence in the Persian Gulf. "Today, the enemy makes statements that are bigger than their mouths," said Khamenei. "They sit and scheme that Iran must not have military drills in the Persian Gulf. What a strange thing to say. They come from that side of the world and conduct drills. What are you guys doing here?"

Khamenei's comments are in response to an April 28 resolution by Rep. Randy Forbes, R-Va., regarding Iranian naval actions in the Persian Gulf. While the Forbes resolution hardly made news in the United States, it was the top story on Kayhan newspaper's front page May 2. Kayhan is one of the premier conservative papers in Iran, and its editor is chosen by Khamenei.

Forbes, who is chairman of the Seapower and Projection Forces Subcommittee of the House Armed Services Committee, wrote that Iran had on a number of occasions failed to "adhere to international maritime law" and by conducting military drills has "undermined stability" in the Persian Gulf. Iran held naval drills in the Sea of Oman and the Indian Ocean in January. They held a joint naval drill with Oman in December 2015. One of the main incidents cited in Forbes' resolution was the January incident in which Iran seized two US Navy boats, which had crossed into Iranian waters, and took 10 sailors captive. The sailors were shortly released, but the Islamic Revolutionary Guard Corps later released pictures of the sailors surrendering, which angered many American politicians.

Khamenei raised the issue of the military drills to argue that when Iran avoids showing its strength out of fear or consideration for the enemy, specifically the United States, the enemy will demand more concessions and become bold.

Addressing the crowd of teachers on the occasion of Teachers Day in Iran, Khamenei also warned that Iran was facing an "international hegemonic system" and that this system has designs on Iran's youth. He said that rather than using military means, this system would attempt to change the culture of the youth in a way that is more inclined to their system rather than the indigenous culture.

Khamenei lamented that in some places "instead of Persian, English is promoted and it has got to the point that English is being taught in kindergarten." He said that Iranian officials have had no specific plans to confront this plan by enemy countries to spread their culture in Iran and should focus on education that teaches an "identity of independence, honor and religiousness."