Iran conducts large-scale drills amid flaring tensions with US

During the military exercise in the Persian Gulf, Iranian forces were shown firing a barrage of missiles at a replica of a US naval carrier. 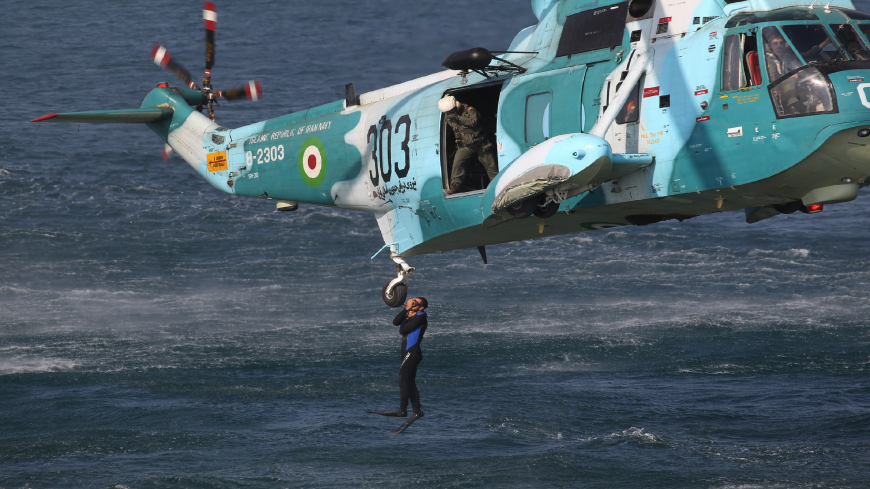 An Iranian navy diver jumps out of a helicopter during the "Velayat-90" navy exercises in the Strait of Hormuz in southern Iran on December 30, 2011. - ALI MOHAMMADI/AFP via Getty Images

Iran’s Islamic Revolutionary Guard Corps (IRGC) is conducting a series of large-scale military drills in Persian Gulf waters west of the Strait of Hormuz, the strategic passageway to some 20% of the global oil trade.

According to the IRGC official website, Sepah News, the exercise is meant to evaluate the “operation preparedness and coordination” among different units, including naval and aerospace divisions. The latter is in charge of the bulk of Iran’s controversial missile program.

The IRGC’s deputy commander for operations and the maneuver's spokesperson, Brig. Gen. Abbas Nilforoushan, said the impact power of ballistic and cruise missiles is practiced against aggressing vessels, mines are planted, and manned and unmanned reconnaissance capabilities are tested in the war game, while the entire operation is being monitored by Nour, the first military satellite the IRGC launched into orbit in April.

In June 2019, the same Iranian forces shot down a surveillance drone operated by the US military over Persian Gulf waters, not too far from the site of the ongoing drills. Tehran argued the aircraft had violated Iranian airspace. While dismissing the charge, the United States decided not to retaliate.

Every year, the Islamic Republic routinely conducts multiple land and sea military drills in strategic and sensitive locations in what is described as “defense maneuvers.” But not every war game has been smooth. Back in May, one such exercise by the country’s regular army (known as Artesh) left 19 sailors dead in “mistaken” missile fire.

Hours into the official launch of the latest exercise, Iran’s state TV broadcast pictures of what was said to be a replica of American Nimitz-class carriers, which the US military has been sailing near the Strait of Hormuz. Coast-to-sea missiles were seen launched at the mock carrier as combat copters were shown hovering around, from which IRGC commandos rappelled down. Reacting to the latest exercise, US Fifth Fleet Spokesperson Rebecca Rebarich slammed it as “irresponsible and reckless behavior.”

The Islamic Republic has long seen the US military presence in the Persian Gulf as a “threat to regional stability” and has particularly used the sensitivity of the Strait of Hormuz as a pressure tool, issuing every now and then threats of a disruption in the global crude flow. In July 2018, after the US administration imposed strict international sanctions on oil trade with Iran, Iranian President Hassan Rouhani suggested Tehran could shut down the strait if its oil exports are blocked.

Amid the scenes of missiles showering the American mock carrier during the exercise on Tuesday, IRGC rhetoric also appeared to be further sharpening, a sign that tensions in the Persian Gulf might not ease anytime soon.

“We warn the enemies that they will have to pay the cost,” said Maj. Gen. Gholam Ali Rashid. “Optimizing all their capacities … the Islamic Republic armed forces will give a firm response to the destabilizing threats and actions by the enemies,” the senior IRGC commander added in his veiled message perhaps for a range of adversaries from the United States and Israel to some regional Arab states.