Israel is issuing magnetic travel permits to Palestinians that only permit a certain number of visits to Jerusalem and Israel each year. 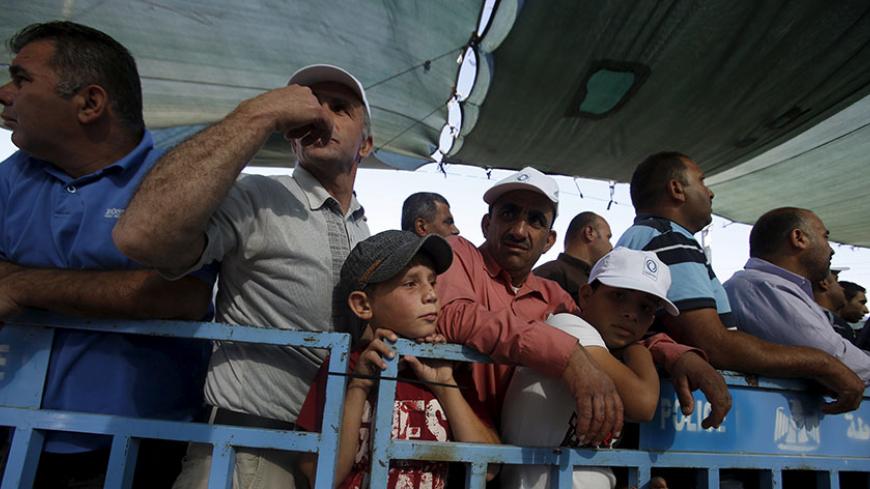 Palestinians wait to show their permits to Israeli security officers as they make their way to attend the fourth Friday prayer of Ramadan in Jerusalem's Al-Aqsa Mosque, at an Israeli checkpoint in the West Bank city of Bethlehem, July 10, 2015. - REUTERS/Mussa Qawasma

In a January bulletin, the United Nations Office for the Coordination of Humanitarian Affairs reported that in the final quarter of 2015, Israeli forces had established 91 new checkpoints, further obstructing Palestinians' freedom of movement throughout the West Bank. For Palestinians living near Jerusalem, the issue of travel to the holy city for work or for family visits is of great importance. When Israel unilaterally annexed East Jerusalem in 1967, and when it built the wall through the West Bank, it isolated Jerusalem from its environs, including the towns of Ramallah, Bethlehem and Abu Dis.

To travel to Jerusalem or Israel, Palestinians are obliged to obtain permission from Israel, which issues permits. Israel regularly changes the color and stamps on these travel documents, in the form of paper permits, to avoid forgeries. Now it has gradually begun introducing a magnetic card containing biometric data for getting through the numerous checkpoints en route from the West Bank to Jerusalem and Israel. The paper permits continue to be issued, but the Israelis appear to be phasing them out to eventually limit travel to use of the magnetic cards. No date has been announced for when the magnetic card will be mandatory.

A 2014 study by the Applied Research Institute examined the economics of the new cards. “Each year the Israeli occupation issues more than 400,000 magnetic cards to Palestinians for the sum of 100 shekels [$26] per card. This is equivalent to 40 million shekels [about $11 million] yearly,” the study summary stated.

The magnetic cards have been around for a while according to multiple Palestinian sources, but in 2016 Israel introduced a new system whereby Palestinians are allotted a certain number of entries into Jerusalem and Israel, and these entries are deducted with swipes of the card at the checkpoints. The cards are usually valid for a year but in certain cases can be used for two years.

Palestinians are restricted to using only certain checkpoints, while Israeli settlers can use any of them. Would-be travelers' entries can be tracked on computers at the crossings.

Sami Awad, executive director of the Bethlehem-based Holy Land Trust, told Al-Monitor about his experience with the system. At the beginning of 2016, Israel credited him with 100 entries for the year. “Every time I cross the Bethlehem-Jerusalem checkpoint near Rachel’s Tomb, my credit goes down one entry,” Awad said. He explained that if he had a meeting in Jerusalem in the morning and another in the afternoon and returned to Bethlehem in between, two entries would be deducted from his card.

Myron Joshua, an Israeli peace activist who works with Palestinian peace groups and who helped Awad get a travel permit to work, told Al-Monitor in an email, “The first months of the year were super problematic because it was thought that people would be allowed only 100 entries into Israel. So, we applied [monthly] for permits based on only 10 or so entries a month. Some people's permits expired way too early.”

Joshua noted one of the consequences of the system. “Every entry seems to be recorded at the passage. So if someone goes from Bethlehem to Jerusalem twice in one day, that is two entries. On the other hand, someone spending a few days at a conference has one entry checked off,” he said. Palestinians are officially not allowed to stay overnight in Jerusalem or Israel, even at the home of direct relatives, so it is unclear that Palestinians can even benefit from the card system in this way.

Joshua said that Palestinians who attend conferences can request overnight stays for the length of the event. “People without magnetic cards can get permits for single-day or two-day entries. Besides this, permits are issued for escorts of Palestinians receiving treatment in Israeli hospitals, but this is normally limited to two escorts per patient who must be immediate family,” he said.

Awad said that the new magnetic card system reminds him of computer games, stating, “With every crossing, your permitted entries go down, and before you know it, you're down to the last entry, and then it is game over.”