After 15 years some Palestinian doctors now drive into Israel

An Israeli decision permitting Palestinian doctors to drive across checkpoints and enter Israel comes as part of a series of Israeli moves to ease the travel restrictions. 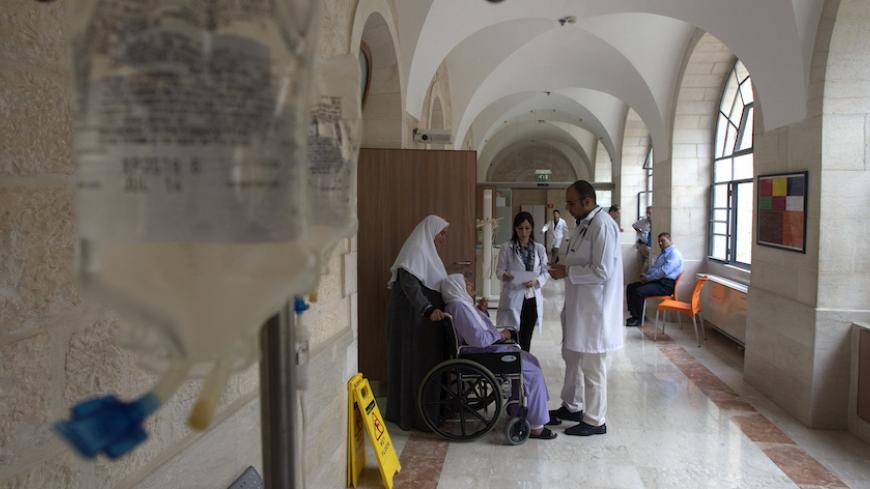 The news report was short, but was broadcast widely in the Palestinian and Arab media. Social media platforms have been buzzing as well. After 15 years of its unjustified ban, Israel has allowed a few Palestinian doctors to use their West Bank cars to reach Israeli hospitals, where they have been accepted for training.

The head of the Palestinian Doctors Association, Nidam Najib, told Al-Monitor that the permission does not include West Bank doctors working for East Jerusalem hospitals, which is where most of the doctors are working.

Nevertheless, Najib said that in general, his association is opposed to any cooperation with Israel. “We have already announced that we boycott Israeli products, including medicines that have a Palestinian alternative. We are also opposed to any act of normalization with the occupation,” he insisted. Najib said that his organization, which represents all Palestinian doctors, was not asked for its opinion on the travel permits for doctors and has no relationship with the decision. However, he said, no disciplinary measures will be taken against doctors who receive permits to drive their cars into Israel.

An Israeli medical source who wished to remain nameless told Al-Monitor the permitting procedure goes through both health ministries, saying, “Applicants have to prove that they work in Israeli hospitals. However, their application has to be approved by the Palestinian Ministry of Health before being issued a permit by the Israeli military coordinator.”

An official with the Palestinian Ministry of Civil Affairs confirmed to Al-Monitor on condition of anonymity that the ministry was involved in the coordination and that the Health Ministry was as well.

The Ministry of Civil Affairs helps coordinate with its Israeli counterparts 26 different types of travel permits, which range from medical and educational to family-related. The ministry source told Al-Monitor that the idea of allowing doctors to drive to Israeli hospitals came from Israeli security officials, who decided that this type of travel is necessary in dealing with emergency cases. While Israeli decisions are always explained in security jargon, the real reason for increasing or decreasing restrictions is political. For example, no reason was given as to why Palestinian doctors working for Palestinian hospitals in East Jerusalem were not granted the same permission.

At present, Palestinian doctors from the West Bank who work in Jerusalem must get a personal permit to cross the various checkpoints into Jerusalem, and thereby into Israel, since it annexed East Jerusalem.

Without the use of their cars, Palestinian doctors as well as the entire population must cross the checkpoint on foot and then take a taxi or bus if they can't get a ride from someone on the other side.

Crossing an Israeli checkpoint by car rather than by foot can mean saving time, harassment and the cost of using various modes of public transportation. For 15 years, Israel has refused to grant West Bank Palestinians the right to use their cars to cross the Green Line. Gazans under siege have not used their cars for decades to enter into Israel or to travel to the West Bank.

Palestinians from the West Bank have been unable to drive into occupied East Jerusalem, in accordance with international law, since the year 2000, when the second intifada broke out. Israel claimed that the decision was made for security reasons, although all Israeli military officials have repeatedly praised the Palestinians for their cooperation with Israeli security forces.

The short press report quoting Israeli military officials said that this decision was a prelude to possibly increase the categories of individuals that will be granted permits to use their cars. According to the Israeli army, as mentioned in various Israeli reports, the next category of individuals that will be allowed to use their cars to drive into Jerusalem and Israel will be Palestinian business people working or dealing with Israelis. No further information has been offered as to how widespread this permission will be or a time frame for its implementation.

Israel's allowing Palestinian cars across the checkpoint comes as part of a series of Israeli decisions to ease the travel restrictions on the entire Palestinian population. Palestinian men over 55 years old and women over 50 years old are now allowed into Jerusalem, and thereby Israel, without a permit so long as they have an Israeli army-issued ID card.

Palestinian Christians, including those residing in Gaza, were given permits to travel to Jerusalem for a month around the Easter holidays. A very small number of Palestinians from Gaza have been given permission to pray at Al-Aqsa Mosque on Fridays.

These Israeli moves come at a time where the international community is putting a lot of pressure on Israel to produce concrete plans to end the occupation. It also comes in response to Israeli security officials warning that if the restrictions and oppressive policies against the general population continue, they will likely lead to yet another explosion.