Cases of swine flu have emerged in Gaza, where hospitals are unprepared for an outbreak and health services continue to deteriorate. 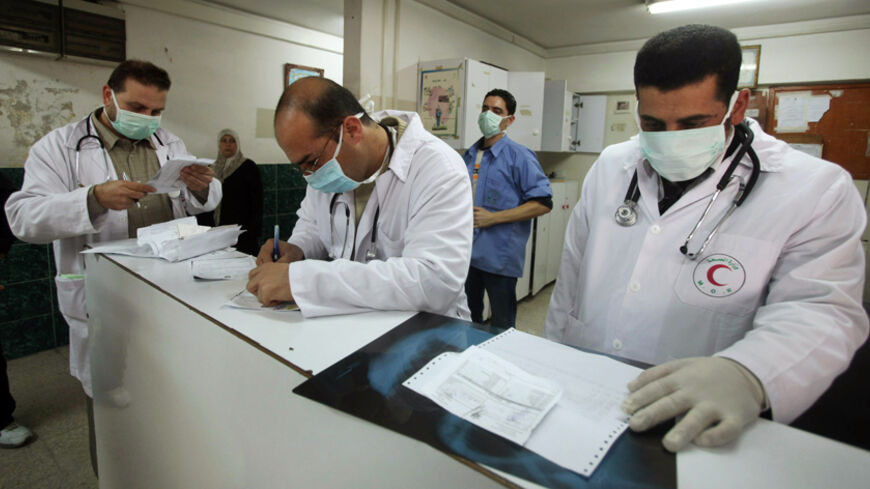 KHAN YUNIS, Gaza Strip — The Palestinian Health Ministry announced that a number of people have been infected with the H1N1 virus, commonly known as swine flu. The Gazan health sector is already in a disastrous situation following the war this summer.

Despite the Health Ministry's announcement that swine flu does not pose a threat to public health and that there have been only a small, if unspecified, number of cases, media reports about a death from swine flu raised public concerns. Officials refused to confirm whether swine flu was responsible for the death.

At the Nasser Medical Complex in Khan Yunis, where these cases are being treated, Al-Monitor met with a relative of Ahmed al-Farra. The 37-year-old is believed to have died at the hospital from H1N1. The relative recounted how Ahmed fell ill. "On the evening of Tuesday [Dec. 2], Ahmed had a high temperature, severe cough and was experiencing shortness of breath. He headed to the hospital's emergency department, underwent treatment for a normal flu and left the hospital that same day."

A doctor at the hospital confirmed that Ahmed's condition worsened while he was being transferred to the ambulance, so he was returned to the intensive care unit. He remained in the hospital until he died on Dec. 12.

Ahmed's death shocked his family, who has yet to receive confirmation of the cause of death. Another of his relatives, who also spoke on condition of anonymity, accused the hospital administration of negligence. "Ahmed entered on his feet and left deceased. He was affected by sepsis and kidney failure, in addition to severe pneumonia as a result of the bad situation, chaos and lack of hygiene in the hospital. No tests were conducted — nothing at all — it was merely a suspicion [that he had] H1N1," he said.

The director of the Nasser Medical Complex, Jamal al-Hams, told Al-Monitor, "The medical report that the Nasser hospital submitted to International Patient Care noted that Ahmed al-Farra was suffering from H1N1, yet indicated that this was just a suspicion." He clarified, "The diagnosis was acute pneumonia, and he entered into respiratory failure that led to his death."

Hams pointed out, "Patients affected with various types of influenza are treated as though they have the normal flu. However, if their situation worsens, analysis is required to confirm which type of virus they have — especially if it is H1N1. The hospital did not carry out this analysis on the patient who died, due to the high cost.

"The hospital did not have [the materials needed for] this analysis, but received them from the Health Ministry after the [patient's] death," Hams said, adding, "Even if we were able to diagnose [H1N1], we do not have the medicine [to treat it]. All we have is the ordinary flu vaccine, and there is a severe shortage of this."

When asked about the other cases of H1N1 or any patients who have recovered from it, Hams said, "We cannot determine the number of cases of H1N1 due to a lack of diagnosis. Two years ago, the World Health Organization [WHO] took interest in this disease and provided the [materials needed for] diagnosis and the necessary awareness for those working in the health sector. Today, however, the WHO has backed off because the virus is no longer an epidemic and intervening is not a priority. The Department of Preventive Medicine in the Health Ministry communicated with the WHO, and the latter said the government was responsible for dealing with this disease."

Magdi Dahir, the director of the Department of Preventive Medicine at the Health Ministry, told Al-Monitor, "Tamiflu, which is used for swine flu, is not available. There is coordination with the WHO to send this drug from the West Bank to Gaza at the government's expense."

Al-Monitor also spoke with Dr. Sami Abu Draz, the director of the European Hospital in Khan Yunis. He said, "We have had three cases of swine flu, but they fully recovered and left the hospital. The disease is now endemic in the Gaza Strip, as is the case in the rest of the world, but it has not reached the stage of epidemic."

The European Hospital is not prepared to confront a major outbreak of H1N1, Abu Draz said, stressing, “The vaccine provided to the hospital by the Health Ministry is not the specialized vaccine for swine flu. It is for the normal flu. Furthermore, we received only limited quantities on a random basis, just for patients with chronic illnesses. There are not enough vaccines for the medical personnel at the hospital, who are in need of vaccination as well."

The hospital director refused to permit Al-Monitor to speak with the doctor who oversees treatment of H1N1 cases.

There have been several crises plaguing the health sector in Gaza. First and foremost was the 16-day strike by sanitation workers over seven months of delayed salaries from the consensus government, leading to fears of epidemics and increased mortality rates. Doctors in Gaza hospitals let out a sigh of relief Dec. 18, after the workers temporarily suspended their strike for two weeks, to give the consensus government a chance to fulfill its promises to pay their salaries.

The spokesman for the Health Ministry in Gaza, Ashraf al-Qudra, told Al-Monitor, "We fear a decline in the Palestinian health indicators monitored by the WHO, since indicators are calculated for Gaza and the West Bank together. The crises facing Gaza's hospitals, including the cleaning crisis and the fuel crisis, could lead to the spread of diseases and increased deaths, weakening the overall index."

Qudra warned of a repeat of the sanitation crisis if the consensus government does not fulfill its promises to the workers. He pointed out that the biggest problem is that "the consensus government has not yet issued tenders related to cleaning, nutrition, medical devices, maintenance, etc, which Gaza's hospitals need. This was supposed to have been done in November."

Promises to solve the sanitation crisis in hospitals may offer a glimmer of hope to workers, but this alone does not indicate an improvement in the hospitals in the Gaza Strip. The lack of effective communication from the consensus government with the health sector in Gaza increases citizens' fears about hospitals' inability to deal with normal diseases, much less deadlier ones like swine flu.