Many Palestinians from Gaza have been given permits to attend Easter celebrations in Jerusalem, though the current easing of restrictions does not mean that Gazans have gained their freedom of movement. 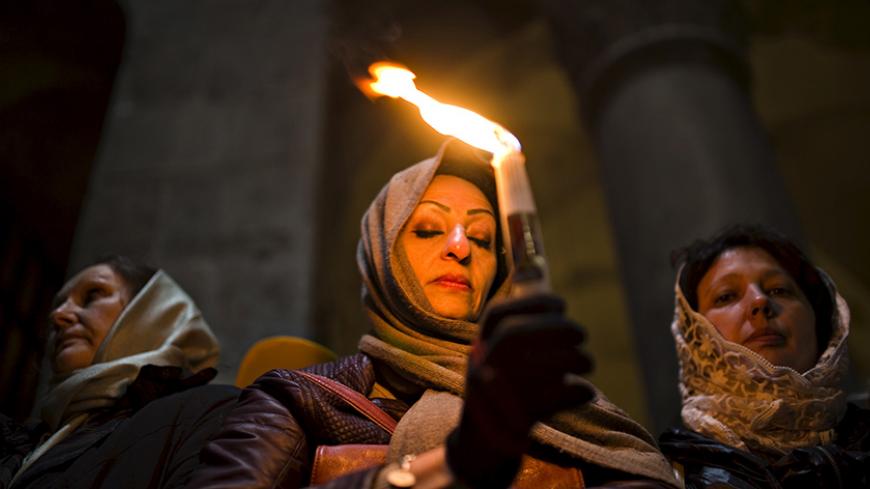 A Christian worshipper holds a candle before the Easter Sunday Mass procession inside the Church of the Holy Sepulchre in Jerusalem's Old City, April 12, 2015. - REUTERS/Amir Cohen

Karam Qubrosi can’t believe that Israel is allowing so many Gazans to travel on the occasion of Easter. “This is a dream come true, especially for many of us in the age group of 18-35,” he told Al-Monitor.

Speaking to Al-Monitor after reaching the West Bank town of Beit Sahour, Qubrosi, 28, said that the last time Israel gave travel permits for men under the age of 35 to travel out of Gaza was at Easter 2008. “That was the last time I was able to travel to Jerusalem for Easter,” he said. Qubrosi explained the process of getting permits: “Every church in Gaza gives names of its parish members who want to travel to the Palestinian department of civil affairs in Gaza, which then sends the requests to the Israelis for permission. ”

Qubrosi, who plans to settle in the West Bank, said that Israel has been giving permits to various Gazan groups, including businessmen and Muslim worshippers, in recent months. Two hundred Gazans over the age of 60 were permitted to travel to Jerusalem on Feb. 26 for Friday prayers at Al-Aqsa Mosque. Permission for similar-sized groups have come every Friday. Some individual travel requests for humanitarian reasons are being granted, but not for groups.

Explaining its position, the Israel Defense Forces announced March 21 that 800 entry permits to Israel were issued by the Coordination of Activities in the Territories, and that Gazans are being allowed to travel out of Gaza via Jordan.

However, according to a March 10 Haaretz report by Israeli journalist Amira Hass, those traveling via the King Hussein (Allenby) Bridge are allowed to travel on the condition they not return within a 12-month period. In January, 351 departures were recorded from Gaza abroad via Allenby, and 301 in February. The monthly average in 2015 was just 121, Hass reported.

He has no idea why his request was rejected and so is applying again.

Qubrosi added that he and his family are planning to stay in the Bethlehem area, even though he knows it is technically illegal, with the hope of eventually getting their residency transferred from Gaza to Bethlehem.

Tarazi, whose family has yet to leave, has applied again, hoping that the Israelis will allow him to join his family in leaving Gaza for Jerusalem. “My 7-year-old son has witnessed three wars and has never left Gaza. I would like to travel with him and the rest of the family as we celebrate Holy Fire on Saturday and Easter on Sunday at the Church of the Holy Sepulchre in Jerusalem.”

Tarazi, a journalist who used to work for the official Palestine TV until the Hamas takeover of Gaza, doubts that the denial of permits follows any logic. “My sister was given a permit and traveled to Ramallah two months ago, but now she was also denied along with me.”

Tarazi said that one or more members of many families are denied travel, which often forces them to rethink whether to go at all.

Nashat Filmon, the director of the Palestinian Bible Society, explained to Al-Monitor how the travel permits become a way to escape. “Life is so difficult in Gaza that when people do get permission to exercise their natural right to pray and visit the holy places in Jerusalem, Nazareth and Bethlehem, they often use it to run away from the difficult reality,” he said.

Filmon said that while he is sad at the sight of Gaza being emptied of its Christian presence, he doesn’t blame Gazans for wanting to leave.

Qubrosi agrees that many Gazans, especially young people, can’t wait for a chance to leave Gaza permanently. “Before 2000, we were happy when the Palestinian Authority was set up in Gaza. We had jobs and life was good. But now Gaza has become a big prison,” he said.

As he awaits his appeal, Tarazi laments the status of Gazans. “My hope is that all of us Palestinian Arabs, regardless of our religious background, will gain the right to move around our country all year long and not just during holidays and based on an arbitrary decision by an Israeli military official.”

For all Palestinians, and especially the residents of the besieged Gaza Strip, this universal right has never been more important to their lives and their future. Ironically, the longer that this right is denied, the more Gazans will want to leave permanently. On the other hand, guaranteeing this right would go a long way toward convincing many of them to stay in their homes and their birthplace.