When Palestinian Christians suddenly received unsolicited three-month travel permits, they and the Catholic leaders were surprised and worried. 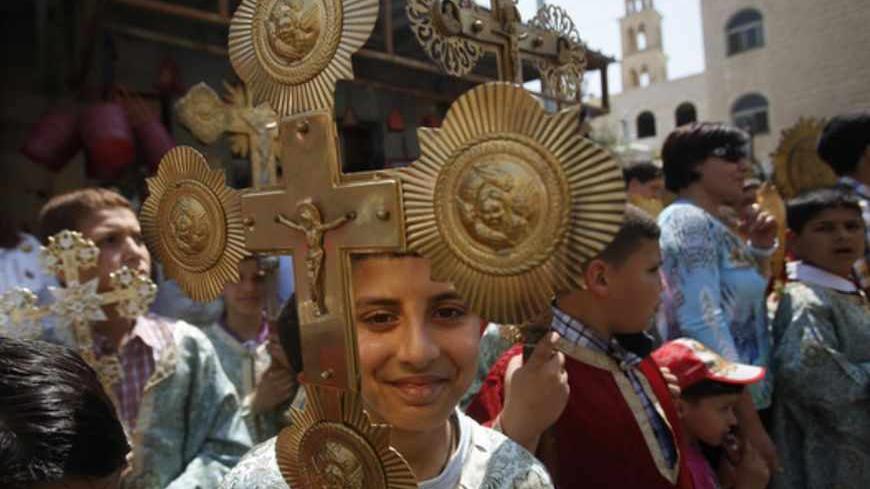 Palestinian Orthodox Christians parade as they celebrate the arrival of the "Holy Fire" from Jerusalem's Holy Sepulchre in the occupied West Bank city of Ramallah, May 4, 2013. - REUTERS/Mohamad Torokman

Alaa from Beit Jala was surprised like many other Palestinian Christians this week when their local church leaders acquired three-month travel permits that will allow them to visit Jerusalem and Israel, and even stay overnight if they choose to. The permits, however, were not given to all Palestinian Christians.

"As part of the easings given to the Palestinian Christian population for Easter, approximately 21,000 permits were issued," the Israeli army's coordinator office told Al-Monitor.

There has been little information as to what led the Israelis to give hundreds of unsolicited permits to Palestinian Christians. Reverend William Shomali, the auxiliary bishop and patriarchal vicar for Jerusalem and Palestine, told Al-Monitor that he was as surprised as everyone else.

“We didn’t ask for these permits, and I don’t like that they are given to a specific group of Palestinians and not to all.” Shomali believes that the entire permit system is a problem and that the right to movement should be made available to all Palestinians.

Giving permits to Palestinian Christians might have a technological basis. Every Christmas and Easter, the Israeli authorities ask local churches to give them lists of their parishioners who are interested in permits to go to Jerusalem, although not all requests are granted. The lists remain with the Israelis. During Islamic holidays, however, Israeli military officials don’t issue specific permits based on lists but rather order soldiers to allow anyone over a particular age to enter. The age issue can be easily verified by looking at their birth dates on the mandatory ID cards that all Palestinians have to carry. Shomali thinks this might be the reason why the Israelis choose to give the Palestinian Christians permits.

“They figured the security situation is calm, and so what is the easiest way to issue permits? They look up their computers and see what names they have already vetted. It was simple, because they could do it with a push of a computer button.” The bishop hopes that this is part of a gradual process that will include the rest of society, otherwise it will look very bad for Palestinian Christians. He fears that this could invite claims of some kind of a Christian-Jewish collusion.

Despite the bishop’s argument that the issue has to do with computer lists, rumors abound as to exactly why the Israelis made this move. The most repeated explanation has an economic twist. The argument goes that based on previous seasons, the Israelis have recorded large purchases inside Israel by the previously banned Palestinians. People returning from visits to west Jerusalem, Tel Aviv and other major cities have been seen carrying packages of clothes and other items. Entertainment institutions such as cinemas, theme parks and children’s amusements have also recorded high revenue from Palestinians coming from the West Bank. For a long time, the restriction of movement has forced local populations to have to buy from Palestinian stores which have poor selections and sometimes inflated prices.

Other Palestinians welcomed the move, saying that local merchants have become complacent due to having little or no competition and not having to work hard for their income. One woman said that she hopes this issue will focus the attention of local merchants on improving their business and being more competitive in terms of both quality and prices.

Discussions around most tables in Bethlehem, however, focus on the worry that this issue might cause fictions among the ever dwindling Palestinian population. If the general population feels that they are being given privileges because of their religion, it could cause some negative repercussions. Even one week after most Palestinian Christians received their unexpected travel permits, no local media outlet dared to even cover the subject, fearing that the story would provoke angry reactions and could end up causing more harm than good to the dwindling Christian population.

In 46 years of occupation, freedom of movement has always been one of the major humanitarian issues. For some time, the big problem was freedom of movement in and out of the region. While the King Hussein Bridge continues to be the only way for Palestinian to travel outside the West Bank, the issue of travel within Palestine, especially between the West Bank and Jerusalem, has become an even bigger problem, especially for residents of Jerusalem's nearest towns of Bethlehem and Ramallah.

Providing one specific community of Palestinians with unsolicited travel permits rather than removing the travel restrictions on all Palestinians doesn’t bode well and leaves a bitter aftertaste.