Iraqis divided over Soleimani's role in their country

Iran's Quds Force Commander Qasem Soleimani is stirring controversy in the Iraqi street, where citizens are waving both Iranian and Iraqi flags during demonstrations for or against his presence. 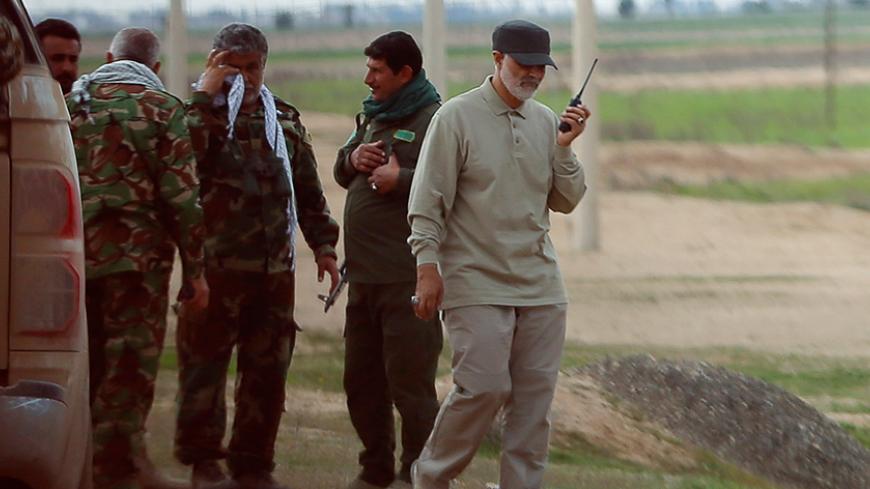 BAGHDAD — Iran's Quds Force Commander Qasem Soleimani has stirred a great deal of controversy in Iraq, where people have started arguing over whether his role is a positive or a negative one. Some Iraqi youths have created social media campaigns in support of Soleimani using the hashtags #WeAreAllSoleimani and #SoleimaniIsOneOfUsIraqis, while others denounce him with #SoleimaniUnderMyFeet.

These campaigns emerged after April 30, when followers of the Sadrist movement shouted slogans against Soleimani and his country in Grand Festivities Square, located in the heavily fortified Green Zone. On the same day, Iraqi activists shared via YouTube an Al Jazeera broadcast about the raising of Iranian flags in Baghdad's predominantly Sunni area of ​​Adhamiya. "Armed Shiite groups known as the Hezbollah Brigades raised the Iranian flag in Adhamiya," Al Jazeera reported.

Iraqis are divided over Soleimani's role in the battles between Iraqi government forces and the Islamic State (IS). Some believe he is defending Iraq, while others suspect he has an Iranian agenda that could harm their country.

On May 6, groups of civilians drove around the province of Basra waving the Iranian flag from their cars.

It should be noted that prior to the events of June 10, 2014, when IS fighters took control of Mosul, many Iraqis did not know Soleimani. He started attracting attention when Iran announced its support for Iraq's fight against IS in mid-2014. The move raised the ire of Vice President Ayad Allawi, who said in March, "Iraqis do not need Soleimani's presence on the battlefield under the pretext of supervising the battles against IS."

Asked to comment on the appearance of the Iranian flag in Iraqi cities, Majid al-Gharawi, an Iraqi parliamentarian for the Sadrist movement, whose followers chanted slogans against Soleimani in Baghdad during the demonstrations against the Iraqi government, told Al-Monitor, "In Iraq, only the Iraqi flag that represents the Iraqi state should be raised. Iraq is a sovereign country, and no other flag should be raised."

He added, "There are people who want to underestimate Iraqi sovereignty, and we will not accept this. We are a sovereign country that everyone should respect so long as we respect everyone. We will face any act aimed at weakening and undermining our sovereignty."

Iraqi TV presenter Ghazwan Jassem told Al-Monitor, "We all agree that Soleimani played a pivotal role in fighting IS, including those who believe he is an icon and those who see him as an enemy. But the recent division emanated from factions that had long worked under his banner on both the political and the military levels, albeit indirectly. Those factions believe that Soleimani now represents a threat to them, especially considering that he is closer than many Iraqi faction leaders to the Shiite fighters in the battlefronts."

Jassem added, "Trying to involve the community in the dispute over Soleimani is a mere political maneuver and an attempt to promote nationalism against Iran on the part of a faction that finds itself unwelcomed by Tehran these days [an oblique reference to the Sadrist movement]. However, as soon as financial and political support returns, the relations will heal."

Blogger Saadallah al-Majid, an opponent of Soleimani's presence in Iraq, told Al-Monitor, "Iraq has turned into an Iranian province, as Iran is dominating the political and security scene in Iraq. The raising of the Iranian flag in Adhamiya and Basra confirms the tragic and bitter reality that is currently plaguing Iraq."

He added, "The raising of the Iranian flag in Iraq as well as Soleimani's presence in the country are intended to convey the message to the world that Iraq is under the control of Iran. Iran and Soleimani's influence should be terminated in Iraq."

Unlike Majid, media figure Mohammed al-Shabaki, who supports Soleimani's presence in Iraq, told Al-Monitor, "Soleimani played a major role in the fight against terrorism. On Aug. 8, 2014, he rescued the city of Erbil from the IS threat, and he is the first military adviser to have arrived in Iraq from a neighboring country. He brought weapons and ammunition to stop IS' expansion toward Baghdad and to protect the city of Samarra."

Shabaki noted, "The recent division over Soleimani has a political aspect. For the Sadrist movement, this division stems from the conviction that some factions of the Popular Mobilization Units that are close to Soleimani did not support the movement in its protests against corruption and are thus against the movements project."

Regardless of the debate over Soleimani and his role in Iraq, his influence has become quite significant, not only on the battlefield against IS but on the Iraqi street as well. At the end of the day, Soleimani has links to armed factions such as the Badr Organization and the League of the Righteous, among others. He enjoys the support of influential political blocs, such as the State of Law Coalition led by Vice President Nouri al-Maliki, though some prominent figures such as Iraqi parliament Speaker Salim al-Jubouri do reject Soleimani's presence in the country.