Islamic Jihad takes drug enforcement into own hands in Gaza 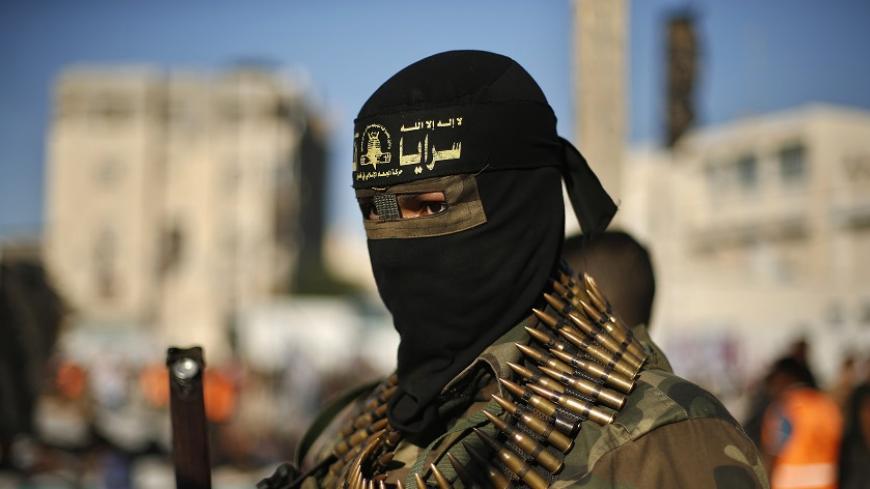 A Palestinian militant stands guard during a rally organized by Islamic Jihad movement in Rafah in the southern Gaza Strip, Oct. 24, 2013. - REUTERS/Suhaib Salem

GAZA CITY, Gaza Strip — On May 2, the Islamic Jihad’s military wing, Al-Quds Brigades, released a video claiming to show that it had raided a number of drug stashes and seized large quantities of the narcotic Tramadol in Rafah, in southern Gaza. Tramadol is an opioid painkiller that has become popular in Gaza over the past nine years and has been smuggled through tunnels on the Egyptian-Gaza border.

The video shows a group of men in civilian clothes, their faces blurred, digging up packets of Tramadol. Al-Quds Brigades claim on their website, Military Media, that they seized 175,000 tablets of the drug. An unnamed official from the brigades’ security division in southern Gaza told Military Media on May 3 that the Tramadol raid was “within the framework of the fight against a deviant class of drug dealers, with dead consciences, trying to push our youth into the unknown.”

The official also said, “We felt responsible toward our people, and this is why we started conducting several raids targeting these dealers’ dens. We were able to seize this huge amount of drugs after a long and complicated operation executed by the control, investigation and seizure units affiliated with al-Quds Brigades’ security apparatus.” He stressed that the brigade’s role ended with the seized drugs being handed over to the Palestinian police.

Mohammed Abu Hashem, a legal researcher from the democratic development unit at the Palestinian Center for Human Rights, noted that official, state bodies are responsible for law enforcement, under the official judicial authorities, the public prosecution and attorney general. “We respect the Islamic Jihad and its position as a faction of the resistance, but it is not an official body that has the right to exercise judicial authority,” Abu Hashem told Al-Monitor. “Thus, the [brigades’] action is considered an infringement of the rule of law and opens the door to taking the law into their own hands, instead of being limited to the official frameworks.”

Abu Hashem further elaborated, “If each group were to declare itself a party enforcing law, or what it claims to be the law, we would have dozens of authorities and dozens of laws, and the citizen would become the victim of all this.”

He stressed that an operation like the one the brigades’ carried out requires permission from the public prosecutor, and they would have to be appointed a party empowered under the law to exercise judicial authority or be designated legal authorities by the Palestinian Legislative Council. Parties such as the police cannot give the brigades this authority, according to Abu Hashem.

Appearing to contradict the unnamed Islamic Jihad official who spoke with Military Media, Daoud Shihab, Islamic Jihad spokesman, told Al-Monitor that his organization does not interfere with the security services’ work in Gaza. “The Rafah incident does not mean that the brigades have turned into an anti-drug or a security agency,” he said. “Their role is known and defined, and there is no way they would have a role other than resisting the occupation.”

Shihab further claimed, “The incident was not planned. It does not fall within a certain policy or approach adopted by al-Quds Brigades, and everything was immediately reported to the police.”

This incident sparked public controversy, as some viewed it as interference in the security services’ work. Media activist Ahmed al-Biqawi posted a video May 3 on his Facebook page in which he criticized the incident. “If the operation were one person's diligence, then there would be no reason to claim responsibility for it,” he said. “Dealing with drug issues is not the job of the resistance. It is that of the [official] anti-drug department.”

Iyad al-Bazm, spokesman for the Ministry of Interior in Gaza, told Al-Monitor, “No faction is entitled to interfere in the work of the security services and the police. We do not allow this, and all factions are well-aware of this matter.” He stressed the role of the military wings of the resistance, stating that they should not interfere in citizens’ lives and issues, which fall under the jurisdiction of the government and its security services only.

“The anti-drug raid in Rafah was fully carried out within the work of the anti-drug police. It was made public as if a military wing had something to do with it, but this is not true,” Bazm added, although this was never officially declared in the media.

It is not common for the police led by Hamas to criticize the resistance, so there is no official statement. But a Palestinian local news outlet reported that the Director of Anti-Drug Police Sameh Al-Sultan posted on his Facebook account on May 5 that the announcement by al-Quds Brigades of the seizure of a quantity of illegal drugs is very surprising, adding that the police had learned that a person from Rafah possesses a quantity of Tramadol and his brother, who is a member of al-Quds Brigades, pledged to hand him over.

He added that it was strange that the brother, who made this pledge, filmed the delivery taking place in the courtyard of his house. “If we assume that al-Quds Brigades’ statement and the video are true, it should be noted that this Brigade is not competent to make such deliveries and the Brigade should have notified the competent authorities and refrain from touching the drugs,” Sultan said.

Drug-related crimes — including cultivation, trade and consumption of drugs — are primarily found in Rafah because it borders Egypt. In 2008, 82 drug-related crimes were registered, i.e., 23.4% of the total crimes that occurred in Gaza that year, according to a study by Maysaa al-Abadila on the effects of drugs on Palestinian society. On April 27, the police in Rafah announced that it had carried out the harshest campaign in years against drug dealers and seized large amounts of cannabis (hashish), Tramadol and weapons.