Egypt's army has for the first time accused the Iranian-backed Palestinian Islamic Jihad of armed involvement in the Sinai. 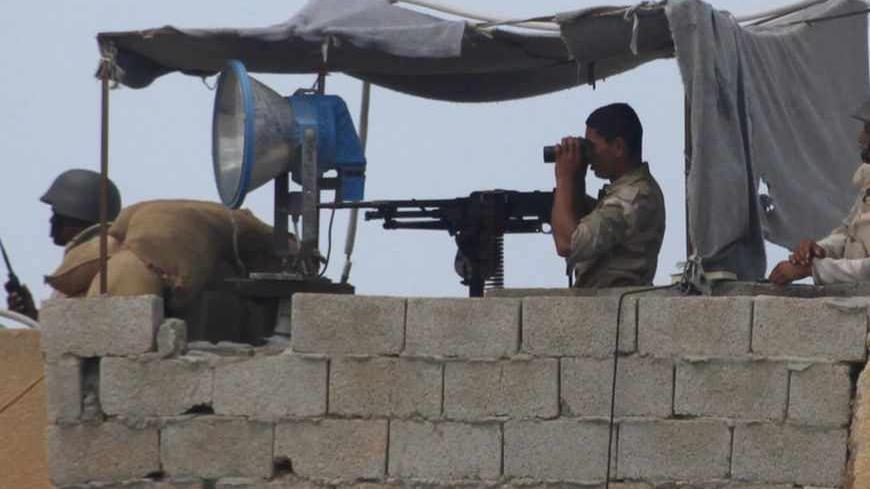 GAZA CITY, Gaza Strip — The Egyptian army has said that terrorist elements in Sinai have used heavy weapons belonging to the Al-Quds Brigades, the armed wing of the Islamic Jihad in the Gaza Strip.

A military source told a number of Egyptian news websites on Sunday, Sept. 9, that these heavy weapons were seized during the military operations currently targeting criminal groups in Sinai, which had carried out attacks on the army, police and vital installations.

This is the first time that the Egyptian army has directed accusations at a movement associated with Iran and Syria in the Gaza Strip. Previous accusations of involvement in the events in Sinai were made against Salafist-Jihadist groups or Hamas.

The official Facebook page of the military spokesman for the Armed Forces, Col. Ahmad Mohamed Ali, published a photo of the weapons carrying the logo of Al-Quds Brigades. The photo, which was widely circulated in the Egyptian media, carried the following caption: "The combat groups in the Armed Forces and the Central Security Forces, backed by intense aerial cover from military helicopters, continue the implementation of the largest security operation in North Sinai, which aims to target terrorist outposts, capture armed takfiri elements and outlaws, and raid and destroy 118 outposts in which armed terrorist elements are stationed."

"The armed forces were able to seize four mortars, 27 mortar shells, an anti-aircraft missile, five RPG projectiles, four grenades, two automatic machine guns and hundreds of bullets for automatic rifles and sniper rifles during the inspections," the statement, which was published Sept. 8, continued.

The Al-Quds Brigades responded promptly on Sunday evening, issuing a statement denying the weapons seized in the Sinai belonged to them.

"Our main and only arena of operation is Palestine, and our resistance is directed against the central enemy of the nation: the Zionist enemy. Islamic Jihad has no interest in interfering in the affairs of Arab countries, especially big sister Egypt,” an Al-Quds Brigades official source said in the statement.

Regarding the pictures published of weapons carrying the Al-Quds Brigades logo, the statement said: "We assert that the picture featuring the logo is no more than popular hearsay, widely circulated within Gaza, These fabrications are easy to print and promote."

The statement stressed that Islamic Jihad and Al-Quds Brigades have nothing to do with the weapons. "We were never a party to any internal conflict related to any regional country. Our position is known to all, declared, and fixed," it added.

The statement concluded by underlining the strong relationship between the Egyptian and Palestinian peoples, noting that this historical relationship will not be affected by the lies, deception and fabrication some are trying to promote.

Al-Monitor tried to speak with several military sources in Al-Quds Brigades, but all stated that the military wing will not give any new comments concerning Sinai and Syria other than the statement. They said that the current stage is sensitive and any trivial comment may be blown out of proportion and cause agitation.

In the same context, Islamic Jihad leader Khaled al-Batsh reiterated the official denial to Al-Monitor. "The movement has categorically denied any connection to the weapons seized in Sinai. Our position is fixed, and we respect Egyptian sovereignty by not interfering with the internal affairs of Egypt," he said in a telephone interview.

"We emphasize that the arena of resistance for Islamic Jihad is in Palestine, along with the Israeli enemy and its occupation of our land. We have not exercised any activity outside of Palestine," he added. He called on the Egyptian media to ensure accuracy, rectify the issue and not involve the Palestinian factions and resistance in the internal dispute. "We respect the Egyptian people, their will and choices," he added.

Mohammad Hejazi, a Gaza-based expert on Islamic groups, told Al-Monitor that there is a possibility that the weapons belong to Islamic Jihad, but not for use in Egypt. "The Islamic Jihad is too wise to get involved in Sinai or Egypt's internal affairs," he said.

"It is also important to remember that the Sunni takfiri groups in Sinai, some of which are former Muslim Brotherhood, would not agree to coordinate with Islamic Jihad, which is close to the Iran alliance that is opposed to them," he added.

Hejazi said that these weapons have been stored for a long time, at least one year, to be entered to the Gaza Strip. "The pictures show a large amount of weapons. Egypt and state agencies have always turned a blind eye to the smuggling of weapons into the Gaza Strip to be used by the resistance," he stated.

He noted that the equation has changed today, especially after the emergence of information indicating that there was a prior plan by the Muslim Brotherhood to build 1 million housing units through a British company, whose owners are Palestinians affiliated with the Muslim Brotherhood, with the aim of resettling part of the people in the Gaza Strip in the Sinai.

Hejazi added that Egypt deemed the plan a threat to its national security and a red line absolving Israel of any responsibility, stating that it affects the Palestinian issue and directs all responsibility toward Egypt. Therefore, the factions and their weapons are now looked at differently.