Following Egypt's January 25 Revolution, the ruling National Democratic Party was dissolved, yet prominent faces from the party are making a comeback in parliament. 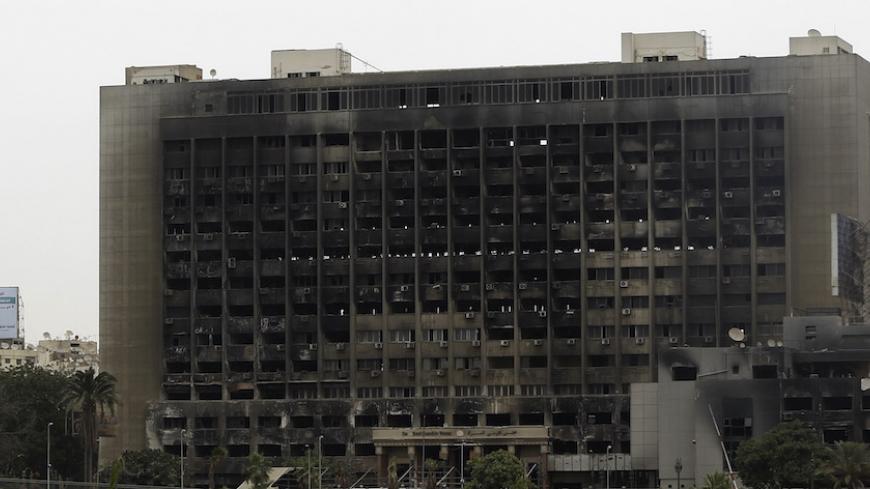 CAIRO — One of the main factors that sparked Egypt’s January 25 Revolution more than five years ago was the rigging of the 2010 parliamentary elections in favor of then-President Hosni Mubarak’s ruling National Democratic Party (NDP). Though the NDP was dissolved in April 2011, its former members still seek a major role in Egyptian politics, especially in parliament.

On April 23, the House of Representatives finished electing 25 committee heads, 11 of whom are former members or affiliates of the NDP.

According to a Dec. 29 study on the current parliament's composition, about 145 former NDP parliament members who were elected in 2010 participated in the 2015 elections. Sixty-five of them won, while 80 candidates lost, some of whom went out in the first round and did not make it to the runoff. The study was published in Democracy, a journal issued by state-owned Al-Ahram newspaper.

The Mubarak-era candidates won 124 seats, or about 21% of parliament. The House of Representatives consists of 448 individual seats, 120 seats based on the absolute closed-list system and 28 members appointed by President Abdel Fattah al-Sisi.

Akram Alfi, a researcher who specializes in parliamentary affairs, told Al-Monitor, “The former NDP members winning this percentage of seats in the current parliament was expected,” as they “contested the elections on the For the Love of Egypt list, which was dubbed as the list of the state and the list of stability. Therefore, it managed to win many votes. For their part, the members who won based on the individual system carry a lot of clout and have a record in their departments, despite the collapse of the ruling party following the January 25 Revolution, as some state apparatuses were biased toward those members for sharing the same political visions with them. Add to this that voters were looking for [parliament members] willing to offer them services, and the NDP-affiliated [parliament members] were keen to do so in order to guarantee votes.”

As for the commission elections, Al-Monitor noted that 31 members of the now-dissolved NDP and former members of previous legislative councils, both the People's Assembly or the Shura Council, won seats in the internal special commissions, distributed as follows: 11 committee heads, 16 deputies in 13 committees, and four secretaries in four different committees. Each commission consists of a head, two deputies and a secretary.

Commenting on the 31 commission position winners, Alfi said, “There are three main factors behind this win. First, the parliamentary experience of those members when it comes to creating blocs that would allow them to get many votes, as well as these members’ participation in committees that are true to their abilities. Second, a bloc of former NDP [parliament members] had originally joined the For the Love of Egypt list, which accounts for a large majority in the parliament. Therefore, these [parliament members] guaranteed their win within their commissions. Third, the former NDP members were able to adapt and exert notable influence during the past three months’ parliament meetings. They also catered to the convenience of the executive branch at a time when other members faced marginalization because of their positions that are critical of the executive branch.”

Asked how the formation of special commissions influences the work of the House of Representatives, Alfi said, “The previous data confirm that these commissions [can] reduce clashes between the legislative and executive powers” due to the “agreement of the special commissions’ members, especially the former members of the NDP, on the executive branch’s vision. There will always be a relative agreement with the ruling regime.”

Hassan Nafaa, a professor of political science at Cairo University, told Al-Monitor the revived careers of former NDP members is evidence of political regression. "The January 25 Revolution was aborted, and the biggest proof is the configuration of the current parliament and the NDP former members taking it over," he said.

"The entire formation of the current parliament is loyal to President Sisi,” Nafaa said. “Despite the absence of a partisan majority in the House of Representatives, its essence has returned to the old configuration with the same names, but with a different speaker and a different mechanism of action.”

He added, "The NDP men have returned through political money and the security services. Five years into the January revolution, Egypt is back to square one, and the current regime is a mere clone of the pre-2011 revolution regime.”

Alaa Abed, head of the parliamentary commission for the liberal Free Egyptians Party, noted that most of the elected commission heads are currently affiliated with the “state support” coalition, which is made of the For the Love of Egypt list.

He told Al-Monitor that this coalition mainly relies on the old NDP members and added that “in the absence of proof of involvement of former NDP [parliament members] in corruption cases, we cannot accuse them unjustly. It is their right to participate in political life.”

Abed criticized the ages of the commission heads belonging to the “state support” coalition. They are above 60 years old and insist on “marginalizing” the role of the youth, he added.