'Foloul' loses its punch in Egypt

The term foloul, or "remnant," was once widely used by the revolutionaries against anyone associated with the Hosni Mubarak regime, but the complexity of Egypt’s political situation has cost the term its effectiveness. 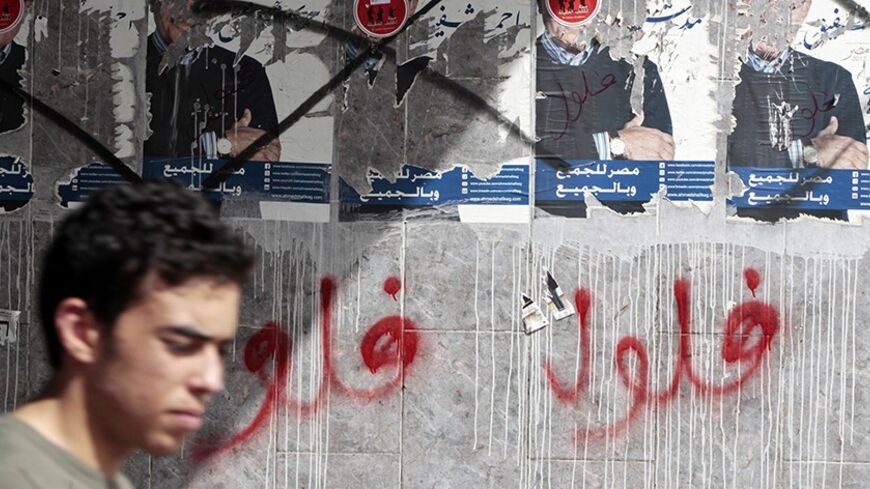 A man walks in front of defaced posters where the graffiti reads "foloul," which means "remnants," in Cairo, April 29, 2012. - REUTERS/Amr Abdallah Dalsh

Use of the term foloul, or “remnants,” has declined in the Egyptian street, especially after the June 30 revolution. Foloul was used to refer to the members of deposed President Hosni Mubarak's regime and the National Democratic Party (NDP), which was dissolved after the January 25 Revolution. Each political side used the term to discredit its opponents. The smear campaign against NDP members made them maintain a low profile, but they returned to political life in force as a key player in the June 30 revolution.

While foloul came to be commonly used in the Egyptian street to refer to the remnants of the former regime, there was disagreement on the exact definition of the word. Foloul’s literal meanings are “breaking and weakening something” and “the defeated.”

The use of the word declined under the weight of the political change in Egypt. After the January 25 Revolution, all NDP members were called foloul. During the Muslim Brotherhood’s reign, foloul was used to refer to those responsible for corrupting political life within the NDP. But now, the term has faded from discourse because foloul figures have become part of the June 30 alliance.

In this context, H.D., who worked in the NDP political secretariat and wished to remain anonymous, told Al-Monitor about the suffering she experienced after the January 25 Revolution, when many started calling her part of the foloul. “I worked with [the NDP] because of my experience as a researcher. My relationship with them was limited to my work function. But many didn’t believe that. … After the revolution, I looked for another job. But I was refused by many jobs because of my previous job, which was seen as a mark of shame, to the extent that some people told me that they agreed to interview me just so they could ridicule my previous work,” she said.

For his part, Fouad al-Saeed, a media expert at the National Center for Social and Criminological Research, told Al-Monitor, “The fading of the term was due to the decline of the channels that were in favor of the January 25 Revolution, the disappearance of religious channels and the proliferation of media channels, most of which are owned by businessmen who were once described as foloul themselves.”

Saeed explained that these programs “criticized and ridiculed anyone who used the term foloul, both during the Brotherhood’s reign and after June 30, and that contributed to the term’s gradual disappearance from the Egyptian street.”

However, Saeed believes that the term’s use did not decline in the Egyptian street, but rather it has become less visible because of the complex political situation in Egypt after the June 30 revolution. He added, “A large mass of people — the bloc that supported the January 25 Revolution — have reconsidered the idea of ​​rejecting the foloul because many of the foloul have not been proven to have been corrupt and because some of them represent a stock of experience in the Egyptian state.”

Are the Muslim Brotherhood behind the term?

Sobhi Asayleh, an expert at the Al-Ahram Center for Political and Strategic Studies, told Al-Monitor that many have accused the Muslim Brotherhood of spreading the term foloul to prosecute members of Mubarak’s party after 2011, in light of legislative attempts to prosecute anyone suspected of having a relationship with the Mubarak regime. On April 12, 2012, the now-dissolved Egyptian parliament, which was dominated by Islamist groups, amended the Organizing the Political Rights Law. This law was known in the media as the “political isolation law.” However, the attempt failed when the Supreme Constitutional Court ruled the law unconstitutional on June 14, 2012.

Asayleh asserted that using the term foloul no longer has an impact because the civil forces themselves did not use it. It has become merely a tool to smear others. He pointed to a genuine change in the Egyptian perception and culture over the three years since the revolution. He continued, “Using [foloul] again will not be effective.”

But Khaled Eid, a Muslim Brotherhood supporter, rejected these accusations. “The term appeared immediately after the January 25 Revolution,” he told Al-Monitor.

“As a result [of the military coup] that happened in Egypt, many accusations were leveled against the Brotherhood. These included claims that [Brotherhood members] were responsible for the Battle of the Camel on Feb. 2, 2011, despite the fact that the Brotherhood was [protesting] in Tahrir Square during that event.” Therefore, according to Eid, the facts change with the political events in Egypt. When the Muslim Brotherhood departed from power, more accusations were leveled against them.

On the other hand, Eid said that the foloul have returned to the political scene in force and do not feel embarrassed about their former affiliation with the NDP, especially in light of the war on the Muslim Brotherhood. He concluded, “The term is no longer of any importance because the current regime is part of the foloul, and our revolution only brought down the head of the regime.”

The fading of the term was due to political changes in Egypt. But the real question is whether the term’s decline marks the return of the NDP and former regime figures to political life in Egypt, and is this return linked to the changes taking place in the Egyptian street, the state of public discontent against the Brotherhood, some January 25 figures and the revolution’s youth?