Egyptian President Abdel Fattah al-Sisi has announced his country's willingness to negotiate between the Palestinians and Israelis, a statement that proved controversial in Egypt. 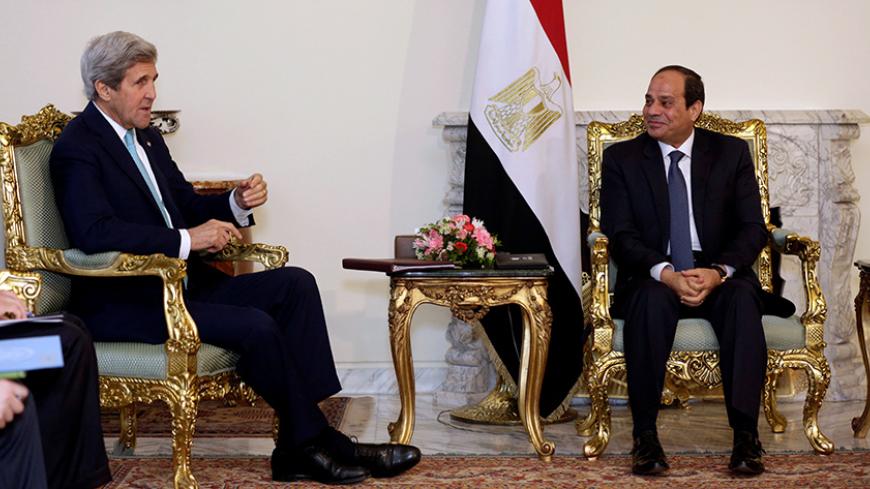 CAIRO — Egyptian President Abdel Fattah al-Sisi announced May 17 that Egypt is ready to broker reconciliation among “the different [Palestinian] factions” in order to arrive at a genuine opportunity to resolve the Palestinian cause.

Sisi also called on Israeli leaders and parties to agree to find a solution to the Palestinian crisis. In a speech broadcast on state television on the sideline of the inauguration of energy-generation projects, he stressed the presence of a serious opportunity to build peace between Palestinians and Israelis.

Sisi mentioned various Israeli aggressions against Egypt — including the October 1973 war — leading up to the Camp David Accords of 1978. He said that a warmer peace will be achieved between Egypt and Israel should the Palestinian cause be resolved.

It seems that Sisi's position is part of a new Egyptian strategy toward Israel. In March, Egypt nominated former Egyptian Foreign Minister Ahmed Aboul Gheit, who is often referenced in Arab media as “Israel’s friend,” to head the Arab League.

This is while media outlets considered that Sisi’s focus on the Palestinian cause in his speeches marked a return of Egyptian interest in Palestinian affairs.

Official Palestinian and Israeli responses welcoming Sisi’s discourse were quick in coming. Palestinian President Mahmoud Abbas expressed his appreciation for the Egyptian efforts to establish a Palestinian state, in accordance with international resolutions.

For his part, Prime Minister Benjamin Netanyahu noted his appreciation for what Sisi is doing, saying he was “encouraged by the leadership [Sisi’s] displaying” on the issue.

Hamas issued a press statement welcoming the Egyptian statement on Palestinian reconciliation. Yet, it ignored Sisi’s comments on peace with Israel.

Sisi's discourse came one day after Israeli opposition leader Isaac Herzog vowed to make regional moves to achieve peace. This has made more probable the hypothesis of coordination with Israel prior to the Egyptian initiative announcement.

Tarek Fahmy, head of Israeli studies at the National Center for Middle East Studies, told Al-Monitor that a comparison between the French and Egyptian initiatives supports the hypothesis that coordination with Israel preceded Sisi's statement.

Fahmy said that the quick official Palestinian and Israeli responses point toward this hypothesis, where Israel's response came 20 minutes after Sisi’s speech. He added that he found it strange that the Israeli rejection of the French initiative coincided with its approval of the Egyptian initiative.

He noted that the Palestinian internal settlement will not enable Israel to acquire guarantees for a warmer peace, and argued that the majority of the Egyptian people do not feel any warmth toward Israel, even though 38 years have passed since the peace process.

Some Israeli journalists pointed to the possibility of prior coordination between Sisi and the Israeli government over a peace announcement between Palestine and Israel. This is as Sisi’s observations were consistent with those of Herzog, who is nominated for the post of foreign affairs minister.

Nadav Eyal, an international correspondent for Israel's Channel 10, tweeted that Sisi’s discourse is linked one way or another to Netanyahu’s and Herzog’s quick and coordinated responses. He stressed that there are negotiations on a regional peace.

Herzog welcomed Sisi’s statement in a tweet, saying it “reflects a possibility for a historic process, where the moderate Arab world expects Israel to courageously, strongly and soberly extend its hand." He recommended studying the Egyptian proposal and seriously and responsibly understanding the opportunities it includes.

Sisi’s statement, whereby he directly addressed the Israelis and demanded that his discourse be broadcast in Tel Aviv more than once, raised controversy among the Egyptian public and on social networks. Sisi was keen to reassure and gain the Israelis’ support, which is unusual in a speech by Egyptian officials. Moreover, he called on Palestinians to renounce internal disputes, yet he did not speak of Israeli hostilities against Palestinians, which Human Rights Watch condemns.

Sherif Azer, an Egyptian human rights activist based in the United Kingdom, mocked Sisi’s speech. In a May 18 tweet, he joked that Egyptians will soon face charges of “insulting Israel” or “destabilizing the Zionist entity.”

For his part, the director of the Arabic Network for Human Rights Information, Gamal Eid, tweeted that he does not respect “the regime that calls for a warm peace with the Zionist enemy.”

US Secretary of State John Kerry met Sisi in Cairo 24 hours after Sisi announced the Palestinian-Israeli peace initiative. This was Kerry’s second visit to Egypt in less than a month.

Hazem Hosny, professor of political science at Cairo University, said Sisi’s statements are not reassuring since there is a lack of any sign of a proposed peace project.

In a May 17 Facebook post, Hosny wrote that Sisi’s improvisational and lighthearted style is meant to play on emotions but is not based on any foundations and does not propose conditions upon which peace can be built.

Hosny described Sisi as “the godfather of peace” and said that his discourse is sweet on the outside and bitter on the inside. He wondered how convinced Palestinians are about Sisi’s wisdom in calling on all Palestinian factions to reach an agreement at the same time dispute and division are obvious in Egypt.

“I do not know how the Israelis will be convinced with Sisi’s perspective for stability, while the situation is vulnerable in Egypt itself! I do not know who will fall into the trap of emotional language first: the Israelis, the Palestinians or the Egyptians?” Hosny wrote.

Sisi had called for expanding the Camp David Accords to include other Arab states last September during a visit to New York.

It should be noted that Egypt is the first Arab state to conclude a peace treaty with Israel, in 1979, brokered by the United States. Yet Egyptians still maintain lukewarm views about it.