Sisi calls on Arab countries to expand peace with Israel 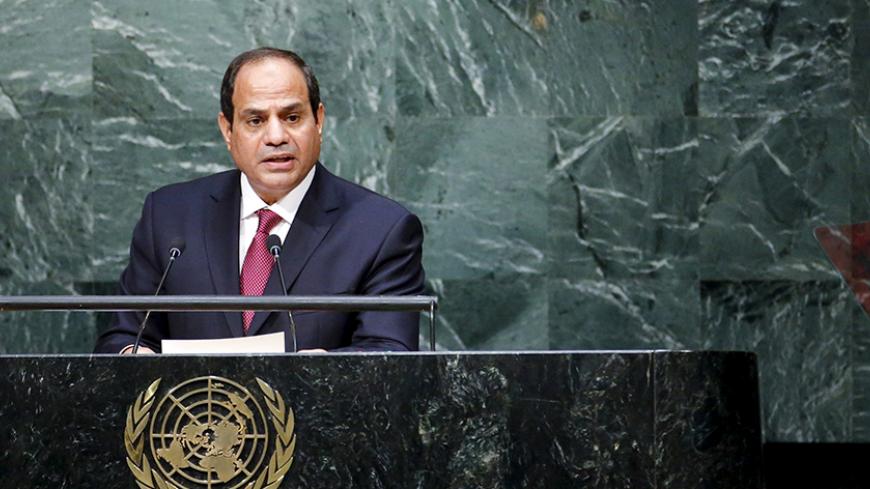 CAIRO — Egyptian President Abdel Fattah al-Sisi recently called for expanding the 40-year-old peace process between Egypt and Israel to include more Arab countries. In a Sept. 26 interview with the Associated Press, Sisi said peace between Egypt and Israel was achieved despite great doubt. He added that solving the Palestinian crisis would change the face of the region.

Israeli Prime Minister Benjamin Netanyahu saw Sisi’s call as an opportunity and welcomed it on the same day. Netanyahu called on Palestinian President Mahmoud Abbas and the Palestinian Authority (PA) to return to the negotiating table to resume the peace process and move forward.

Abbas surprised almost everyone when he announced in his Sept. 30 speech to the United Nations that the PA "cannot continue to be bound" by the Oslo Accords, a set of peace agreements signed by Israel and the Palestinian Liberation Organization in 1993 and 1995 in Washington, D.C., and Taba, Egypt, respectively. Abbas said the statement came in response to Israel's failure to fulfill its commitments toward ending the Israeli occupation.

The first viewpoint sees this as a call for normalization despite repeated infringements by Israel of Al-Aqsa Mosque and its legislation of racist laws directly targeting the resistance, including the act of throwing stones. The Israeli government on Sept. 21 had passed a draft bill prepared by the Israeli police command, and agreed to by Israeli Attorney General Judea Feinstein, allowing police to open live fire against anyone throwing stones and Molotov cocktails in occupied Jerusalem.

The other viewpoint says Sisi’s call will stimulate the stagnant peace process.

Samir Ghattas, an expert in Palestinian affairs and director of the Middle East Studies Forum think tank, told Al-Monitor, “President Sisi’s recent statement is based on the fundamental principle of the establishment of the state of Palestine based on the borders of June 1967 and with East Jerusalem as its capital. Sisi made such a statement in his speech at the UN General Assembly meeting on Sept. 28; therefore, the two statements cannot be separated. Arab countries that Sisi called upon to join his initiative [won't] do so if it does not include this principle, which will render his initiative useless.”

The initiative is based on the agreement reached by Arab leaders at the March 2002 Arab summit in Beirut, which called for a comprehensive peace between Arabs and Israel after establishing a Palestinian state with Jerusalem as its capital, and allowing refugees to return to their homes as soon as possible, in accordance with UN Resolution 194 of 1948.

However, former Israeli Prime Minister Ariel Sharon has set contrary Israeli conditions, saying in 2002 that a withdrawal to the 1967 borders would lead to “Israel’s destruction.”

Ghattas sees three political motives behind Sisi’s initiative: support the Palestinian position by unifying Arab ranks, bring back the Palestinian issue to the global table after its lengthy neglect and reintroduce Egypt to the world as the Middle Eastern country most capable of mediating a comprehensive and just peace.

According to Ghattas, Abbas' speech to the UN was previously agreed upon in Egypt, since Abbas had visited Egypt on Sept. 9 before going on his European tour and then on to the UN headquarters in New York. Ghattas believes it was also agreed that Abbas would announce Palestinian withdrawal from the Oslo Accords, which Israel turned into ink on paper. At this point, Egypt suggested — and Sisi subsequently called for — a collective peace agreement that would present an ultimatum to Israel: Accept peace with all Arab countries or have no peace with any of them.

Ghattas believes Sisi was not trying to normalize relations with Israel. “Sisi is trying to make a cold peace with Israel and the latter is well aware of that, but would take this cold peace over a hot war anytime,” he said.

Hassan Nafaa, head of the department of economics and political science at Cairo University, said Sisi was not aware of the full extent of his statement, since the peace agreement between Egypt and Israel is a bilateral agreement reached after strenuous efforts and cannot include new external parties. Rather, any such agreement with Israel must be reached through new negotiations and a new treaty.

Nafaa added that the idea of a comprehensive peace with Israel isn't feasible since all of the countries bordering Israel, including Syria, entered negotiations with Israel. But when negotiations focused on establishing a Palestinian state under the June 1967 borders, Israel evaded any treaty in this context.

“Calling upon the Arab states to enter into a peace treaty will give priority to Israel, which soon will shy away from its obligations to return the occupied territories. This has happened with the Oslo Accords and UN Resolution 194 on the right of return of refugees, which was a condition — that Israel has yet to meet — for its admission at the UN,” Nafaa said.

Said al-Lawandi, an expert in international relations at Al-Ahram Center for Political and Strategic Studies, told Al-Monitor, “Israel sees the Islamic sanctities as an obstacle preventing it from ending the Palestinian cause; therefore, it races time to Judaize Jerusalem, and all it has left is to demolish Al-Aqsa Mosque.”

He explained that Sisi is calling for all Arabs to support the Palestinian cause and protect Al-Aqsa Mosque, since Palestinians are not solely responsible for the mosque.

Lawandi added, “Sisi wanted to solve the Palestinian cause in light of difficult security situations experienced by several Arab countries such as Syria, Libya, Iraq and Yemen. War will not be an option in dealing with Israel in order to protect Al-Aqsa Mosque, and this is why Sisi [proposed] the peace option.”