Has IS reached the heart of Cairo?

A May 8 attack that killed eight policemen in southern Cairo has sparked fears that the terror group has reached the city's capital, but questions remain about the culprits. 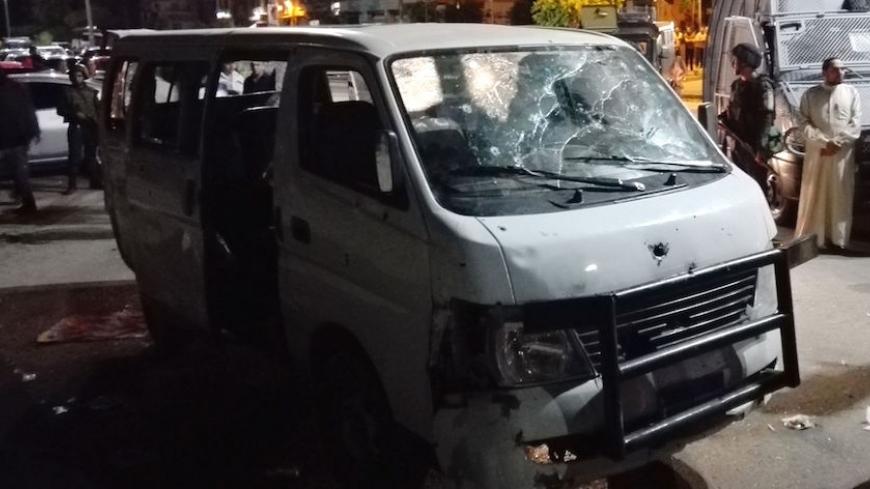 A picture taken in the early hours of May 8, 2016, shows a damaged vehicle following a gun attack on Egyptian policemen in Cairo's southern outskirts. - AFP/Getty Images

On May 8, eight Egyptian policemen were killed in an attack by masked gunmen who opened fire on them in the Helwan district of southern Cairo.

In a statement published on its official Facebook page the same day, Egypt’s Ministry of Interior said that the policemen had been on a mission at the time of their death. Dressed in civilian clothes, they took the microbus. A truck intercepted them as they were moving along the Nile Corniche area. Four unidentified men who were hiding in the truck stepped down from the vehicle, opened fire on the policemen and fled.

The Islamic State (IS) claimed responsibility for the attack on Twitter accounts affiliated with the group, in what the group described as an act of vengeance for “pure and honorable women prisoners” held by Egypt.

One eyewitness, who spoke on condition of anonymity, told Al-Monitor that she heard heavy gunshots and peeked from her nearby house balcony to see gunmen with machine guns shooting at people in a microbus then fleeing in a truck with the flag of IS on its front.

Meanwhile, Maj. Gen. Mohammed Matar, the former director of security for the North Sinai province, told Al-Monitor that he doesn’t “rule out the involvement of some of the Muslim Brotherhood members in the incident.” He expressed his belief that some Muslim Brotherhood members were likely involved in concealing IS members in the Helwan area and facilitated their attack. He stressed that the desert hinterland that lies to the south of Helwan allows for criminals to easily disappear, not to mention that the area includes a large number of Brotherhood-affiliated people.

Matar told Al-Monitor that Egyptian army operations have succeeded in eliminating many terrorist outposts. This has prompted IS to prove its existence by hindering Egyptian security efforts and showing that it is capable of hitting different areas in Egypt, including the capital. Matar expected the organization to carry out further attacks in major cities, but he confirmed that such operations would be on a small scale with limited goals because of what he described as a high level of security and stability in Egypt.

Naser Zakaria Hussein, professor of strategic studies and former director of the Military Academy, ruled out the possibility of IS being involved in the incident. Speaking to Al-Monitor, he said that the heavy security presence in the Sinai Peninsula, the ongoing operations by the armed forces against terrorist strongholds and the killing of hundreds of militants would prevent other militants from making it this far.

At the same time, Hussein stressed that Egypt’s ongoing war on terror will lead to inevitable confrontations with terrorists in different areas. He also said that all of Egypt is at risk at the moment, and that the war on terror is likely to drag on for several years.

Hussein added that the security apparatus in Egypt does not need to train its personnel in ways to anticipate dangers. Rather, it is in need of military equipment, which requires significant cost that the state is not able to afford in light of the current economic crisis.

“The security services cannot be breached and everyone agrees that we are facing a fierce war on terror,” Hussein said, denying claims about an official in the Interior Ministry leaking information to facilitate the targeting of security forces. He also stressed that the tight security measures within the police do not allow for the leaking of such information.

Chief prosecutor Ahmed Al-Abraq denied reports about the involvement of some police officers in leaking information about the mission that was targeted. These officers were summoned to be questioned about the incident.

Col. Hatem Saber, an expert on international terrorism and a lecturer at Nasser Military Academy, said, “What happened indicates that there were clear violations within the Interior Ministry.” He told Al-Monitor that the members of the targeted patrol were from the investigation department at the Interior Ministry, stressing that this department’s task is to collect information and work in secret, and that a person from this department must have leaked details about the patrol’s movement.

Saber said that any successful terrorist operation passes through five stages — “target selection, carefully studying the target, practicing on a similar target, actual execution and escape” — and all those stages were successfully executed in the May 8 attack. He noted that the needed information to execute an operation with such accuracy can only be provided by a security apparatus that has access to detailed information about patrols.

In addition to IS, the Popular Resistance Movement claimed responsibility for this incident. They noted on their Facebook page that they received detailed information about the police force’s movements and prepared a perfect ambush and killed them. According to the Popular Resistance Movement, the terror attack occurred 1,000 days after demonstrators in support of former President Mohammed Morsi were dispersed in Rabia al-Adawiya and Nahda squares.

Saber noted that the fact that several parties claimed responsibility for the incident is a means to destroy the state by providing conflicting information, in a bid to consolidate the idea that those carrying out these terrorist operations are rebels or individuals resisting authority.

Saber predicted a significant increase in terrorist attacks and the disappearance of what he described as religiously motivated attacks. He said that in return for the latter, attacks in the name of the armed resistance would be carried out. He expressed his belief that the country could see an expansion in terms of both bombings and assassinations.

Although Saber stressed that the Egyptian security institutions are doing their job properly, he called on the need to re-examine all those working with the targeted patrol to find out who leaked the information and use new means to exchange information among security apparatuses. In addition, he pointed out how necessary it is for the investigation department to be more secretive when it comes to its field action and divide the patrols into several cars in order to ensure their security.

Meanwhile, Matar believes that the security forces need to be more vigilant and constantly on guard for such ambushes, especially in exposed areas like the one in which the most recent attack was carried out.

“The [department] needs members who are more trained to deal with such attacks,” said Matar, demanding the presence of trained members from the central security or special forces armed with automatic weapons to accompany security patrols, monitor roads and be fully prepared for any possible attack.