Terrorists in Sinai up their game

In a striking development, an Islamic State splinter group in Sinai has targeted an elite Egyptian army battalion, which raises concerns that militants might be adopting a new pattern of qualitative operations. 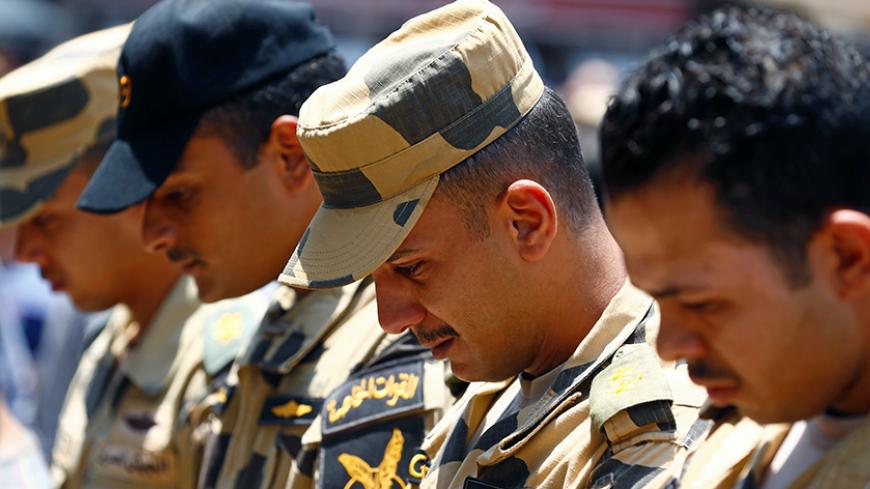 CAIRO — Terrorists appear to be shifting their tactics in Egypt, not only aiming for highly visible civilian targets but also taking on higher-risk attacks.

After Egypt’s armed forces overthrew President Mohammed Morsi in July 2013, in the wake of massive protests against him on June 30 of the same year, clashes spiked between the forces and terrorist groups in Sinai.

These clashes escalated when violence spread to the cities with a series of terrorist operations: the bombing of the Cairo Security Directorate building in 2014; the assassination of former Attorney General Hisham Barakat in 2015; the bomb explosion that hit Cairo’s St. Peter and St. Paul Coptic Orthodox Church in December; and the bloody April attacks on St. Mark's Church in Alexandria and St. George's Church in Tanta.

On July 7, new attacks seemed to make a quantum leap in daring, as terrorists targeted the outpost of an elite Egyptian commando force, the 103rd Thunderbolt Battalion (al-Saaka), in the southern Rafah village of el-Barth in Sinai. In a statement the same day, an Islamic State (IS) splinter group in Sinai claimed responsibility for ambushing the battalion.

The attack began when a suicide bomber rammed his vehicle into an Egyptian army checkpoint in the border town of Rafah. Militants started shooting at soldiers, killing at least 15 members of the battalion and injuring 11 others. The battalion, however, immediately retaliated, killing 40 of the group's fighters and destroying six of its vehicles.

The 103rd Thunderbolt Battalion is one of the Egyptian army's most renowned units, ever since its members participated in Fighting Group No. 39 in the War of Attrition (1968-1970) against Israeli forces in Sinai. They also fought in the Yom Kippur War in October 1973, during which their commander, Ibrahim al-Rifai, was killed.

Given this battalion’s outstanding achievements, it detached from the infantry division and the traditional Thunderbolt force to become directly subordinated to military intelligence and the republic's presidency. Its members take on the most difficult military tasks. The battalion played a major role in the fight against terrorism by deploying to Sinai to raid several criminal and terrorist outposts in the peninsula. Since 2013 it has eliminated a large number of militants.

The assault on the 103rd Thunderbolt Battalion was the first time such groups have targeted a specific battalion, and it might suggest that terrorist operations in Sinai will no longer be limited to ambushing police patrols.

Gen. Hisham al-Halabi, a military adviser at Egypt's Nasser Military Sciences Academy, told Al-Monitor, “The terrorist operation against the 103rd Battalion does not mean that militants will be launching qualitative operations from now on against Egypt’s armed forces or in Sinai in general. Terrorist organizations are not state or regular forces, [which] have a specific strategy. These are a group of gangs acting according to the circumstances and the information available to them. For example, if these organizations feel that military points are well secured, they will attack civilians in Sinai; if they sense tight control at the entrances and exits of villages and cities to protect civilians, there they would attack government facilities; and when these facilities are well protected, they attack tourists or churches.”

He added, “Terrorist members are just a group of mercenaries living on the support and financing of foreign intelligence agencies such as Qatar's." The recent operations, including the assault on the 103rd Battalion, represent an "attempt to keep this support and funding," he said, since such support is at risk following the Egyptian-Gulf ban on Qatar. Egypt — along with Saudi Arabia, the UAE and Bahrain — accuses Qatar of financing extremists, which Doha denies.

That kind of motivation, however, is no substitute for a strong strategy, he said.

“The desire to keep the support and financing flowing at any price prompted terrorist organizations to embark on reckless operations that resulted in more losses than gains, as happened in the assault on the 103rd Battalion, due to the battalion's preparation and training. … If these operations turn into a continued pattern, terrorists will suffer more losses, especially as the armed forces are more than ever resolved to avenge their comrades," Halabi said.

Retired Col. Khaled Okasha, director of the National Center for Security Studies, told Al-Monitor, “Although the operation appears to be somewhat qualitative, given that it targeted the 103rd Battalion and was carried out with professional tactics, it is clear that it was not planned like other [such] operations executed in Egyptian cities, such as the attack on the Cairo Security Directorate and on several churches. [The terrorists] did not thoroughly assess the battalion's strong capabilities compared with their own, despite the professionalism and skills they had in using arms and car bombs, as evidenced by the high number of casualties registered among the ranks of the terrorist group.”

Okasha explained, “This operation is a mere attempt by terrorists to reshuffle their cards by confusing the armed forces. The army had, between February and April 2017, succeeded in clearing most terrorist strongholds in Jabal al-Halal. This may also be an attempted revenge, since the 103rd Battalion played a major role in the clearing operation, and terrorists assassinated Col. Rami Hassanein, the commander of this battalion.”

“Qualitative operations are a characteristic of specific periods when terrorist organizations see their activities subject to an increasingly tight security grip. In light of the intensified crackdown on terrorism in Sinai, [such] terrorist operations are now being executed in cities, targeting churches and tourists," he told Al-Monitor.

However, the pendulum will swing back as security forces secure churches and ensure the safety of tourists, he said. Terrorist organizations will once again try to ensure a strong foothold in Sinai "by waging such ferocious qualitative operations, which are likely to become even more brutal," he said. But such operations "aren't a sign of victory or advance," but rather indicate a setback as the attackers are driven out of one venue and forced to adapt to another.