Egypt's Copts have no plans to arm youth groups

Before the news was shown to be false, jumpy Egyptians were unnerved by a report about Christian youth groups receiving military training to protect their churches. 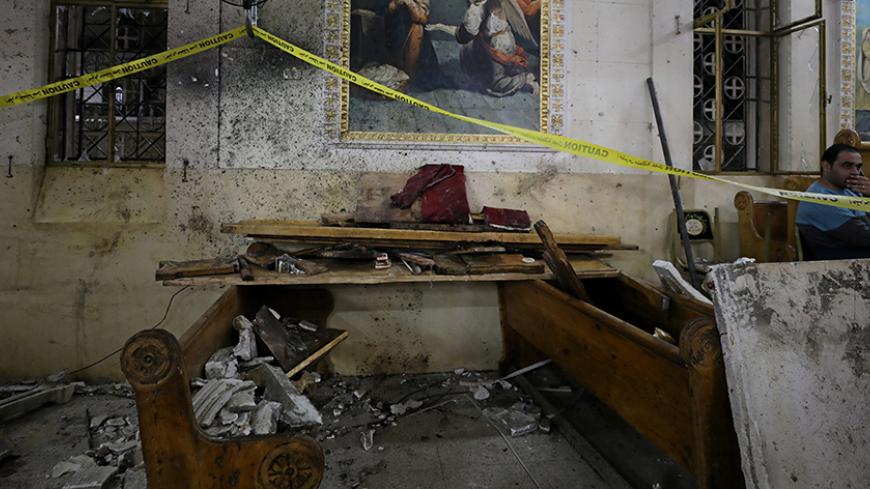 The aftermath of an explosion is seen at a Coptic church in Tanta, Egypt, April 9, 2017. - REUTERS/Mohamed Abd El Ghany

CAIRO — Despite a recent news report, the Coptic Church of Egypt has no intention of arming or training its parishioners to fight, according to Bishop Anba Makarios, the top Coptic Orthodox cleric in Minya governorate.

Terrorist attacks on St. Mark Church in Alexandria, St. George Church in Tanta and St. Peter and St. Paul Church in Cairo have led to widespread fears of recurring violence. In a society highly sensitive to the dangers posed by militias, controversy flared after Al-Dostor reported June 20, “Well-informed church sources revealed that the Egyptian Interior Ministry denied a request from Coptic Church leaders to provide church scouts with military training and training on carrying weapons following the attacks on Copts in Minya last month.”

Observers said it's possible that some individuals, even individual clergymen, in the church called for arming groups of Christian young people after the attack, but if they did so, it was without the church's permission. These young people are members of the church scouts — known as kashaafa in Arabic — a youth group designed to build character by providing training in social skills, creativity and self-reliance.

Church leaders have stressed their opposition to having scouts carry weapons, undergo military training or play any formal security role.

The Interior Ministry did indeed extend to the church leadership an offer, which was rejected, to provide military training to members of the scouts, who provide assistance to church members and visitors. After the terror attacks, Egyptian police began closely screening attendees at some churches before services. The scouts help streamline the process by identifying regular parishioners, who are then subject to less scrutiny. Sometimes scouts might also help search bags and keep their eyes open for anything unusual.

In a June 17 statement, Makarios said the church had turned down an offer from the Minya Security Directorate to select a group of church scouts to be trained at the Interior Ministry's Department of Civil Protection in responsee to attacks on churches.

Makarios said the church fears that “sick-minded people” might interpret such training as an attempt by the church to form an armed military wing, something the church categorically rejects.

“Some had previously accused the church of storing weapons, but the destruction of dozens of churches in different governorates across the country" in recent years "has proven conclusively that this is not true," Makarios said. "Terrorists did not find any weapons, or they would have immediately revealed them. If churches had weapons stored on their premises, logically they would have used them to defend themselves during attacks."

Makarios went on, “Scouts do not assume the role of police, whether inside or outside church premises. … Securing church premises is the responsibility of police, while young scouts assist internally and distinguish between the church community members and outsiders."

The Rev. Boulos Halim, a spokesman for the Orthodox Church, also denied the claims by Al-Dostor about church leaders asking the ministry to arm the scouts.

He told Al-Monitor, “The bishop of Minya turned down the offer to train church scouts and denied any accusations and allegations that the church is seeking to obtain weapons. This is the stance of the entire Orthodox Church.” He said it doesn't make sense for church leaders to decline training and then three days later demand that the Interior Ministry provide scouts with weapons.

“Any training the scouts receive relates to organizational matters, such as how to escort guests on church visits and identifying strangers or suspicious persons — it is not security training. Organizational training relates to identifying and reporting dangers, while security training involves repelling and dealing with these dangers. The latter is the job of the police, so we are opposed to training [scouts] in these matters,” he added.

A source close to the church told Al-Monitor on condition of anonymity, “Some church leaders may have separately demanded that the ministry arm scouts, but this does not reflect the opinion of the Orthodox Church leadership, which would never make such a request.”

Retired Col. Khaled Okasha, director of the National Center for Security Studies, told Al-Monitor the churches are vulnerable because security is disorganized. “Terrorists were able to enter churches through the security gaps created by tasking numerous parties with protecting and securing church premises, such as the Interior Ministry, church scouts and church administrative security. Reorganization is needed and security services and tasks should be entrusted only to the Interior Ministry to avoid any confusion," he said.

Mustafa Alawi, a political science professor at Cairo University, also denied that church scouts are forming militias. “I think the military training offer was limited to the basics of ensuring security and protection of facilities, such as how to deal with suspected explosives or use electronic devices to detect weapons, metals and explosive materials,” he said.

Like Okasha, Alawi said it would be best for the Interior Ministry and church leaders to change how church premises are secured by making the ministry responsible for this task inside and outside churches, so as not to burden scouts with a responsibility that they are not prepared for, putting their lives at risk.