Copts once again fall victim to deadly violence in Egypt

In an area of Egypt known for violence against Coptic Christians, a father and son were recently slain, allegedly by an Egyptian who was supposed to be guarding a church. 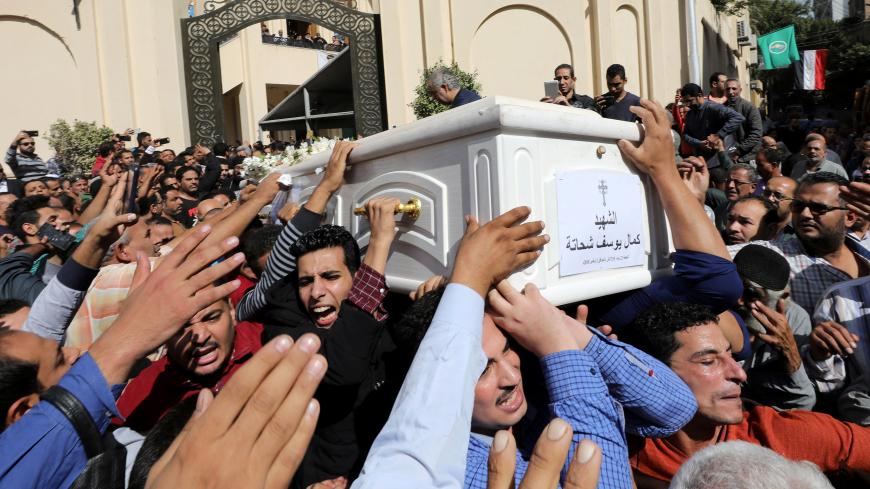 Mourners carry a coffin during the funeral of Coptic Christians who were killed in an attack, Minya, Egypt, Nov. 3, 2018. - REUTERS/Mohamed Abd El Ghany

CAIRO — A police sergeant tasked with guarding a Christian church has been charged with premeditated murder in the shooting deaths of a Coptic man and his son who had been working nearby.

The inhabitants of Minya governorate in southern Egypt awoke Dec. 13 to the news that the evening before, Sgt. Rabie Mostafa Khalifa had allegedly opened fire on the men when a dispute erupted as the sergeant was guarding Nahdet al-Qadasa Church.

The father and son were contractors removing the ruins of a demolished house facing the church when an altercation broke out between Sadiq and Khalifa, witnesses said. Khalifa allegedly shot the men around 6 p.m. Dec. 12, according to a statement by the Coptic Orthodox Diocese of Minya and Abu Qurqas.

Coptic activist and Minya citizen Mina Bashay told Al-Monitor by phone that the sergeant had told the workers to steer clear of the area he was patrolling around the church, and the three of them got into an intense brawl that later resulted in the shootings.

Bashay added that the argument doesn't justify the policeman's alleged premeditated murder of the two Copts using a machine gun — a weapon meant to protect Christians, not kill them.

Bashay said anger has been rising in church circles, especially in the Minya and Abu Qurqas diocese, but this anger remained muffled due to intensified security measures that prohibited discussing the incident in an attempt to contain the situation and ward off sectarian strife. Bashay ruled out the possibility of the government taking action to curb aggression against Copts because it classifies such incidents as “personal” and believes they don't reflect persecution against a vulnerable minority.

The Minya prosecutor's office issued a decision Dec. 14 to jail the accused sergeant for four days for investigation purposes. Before issuing the decision, a prosecution team had headed to the church that day and retrieved surveillance footage to review.

Initially the sergeant had been accused of simple murder, but on Dec. 17, the prosecutor amended the charge to premeditated murder, rights activist Mohammed Hamed told Al-Monitor. Khalifa could be sentenced to death by hanging, as per the Egyptian Criminal Code.

On Dec. 19, the prosecutor's office issued a statement detailing the latest developments, which appear to show that the sergeant had actually been waiting to see the victims with the intent of killing them.

Minya Bishop Anba Makarios told Al-Monitor by phone that in the past, he had repeatedly asked officials for comprehensive security. Copts frequently are attacked and killed in Minya. According to Makarios, such incidents sound the alarm for the state to revisit the services it offers to the governorate and to focus on education and awareness for citizens to avoid such painful occurrences.

Makarios said the slayings of Sadiq and his son are even more disturbing than a Nov. 2 incident, when armed men attacked a bus carrying Copts who were on a visit to St. Samuel Monastery in Minya governorate. Eight of the Copts died as a result of the attack.

He said the St. Samuel Monastery attack was committed by Islamic State members who are enemies of all Egyptians. The recent attack, he noted, was perpetrated by a policeman who was meant to guard churchgoers, not kill them.

Makarios called on President Abdel Fattah al-Sisi to intervene to deal with the repeated attacks on Copts.

A source from the Egyptian Ministry of Interior told Al-Monitor on condition of anonymity that security forces arrested the accused policeman as soon as they learned of the shooting and put him in solitary confinement until the prosecution began questioning him the next day.

The source added that the prosecutor is investigating the incident impartially and transparently, asserting that it is a heinous personal incident whose motives can only be explained by the involved police sergeant.

The source refused to blame the Ministry of Interior for what happened, saying, “The Ministry of Interior has taken several measures to ensure the ... safety of individuals and soldiers. But it cannot detect the movement of each person and know what is going on in their heads. Whether the victims are Christian or Muslim, this is a crime — a heinous one at that.”