Who are Syria's Alawites?

Alawite doctrine differs in many ways from Sunni and Shiite Islam, but Alawites believe they should be respected and accepted as an independent Muslim sect. 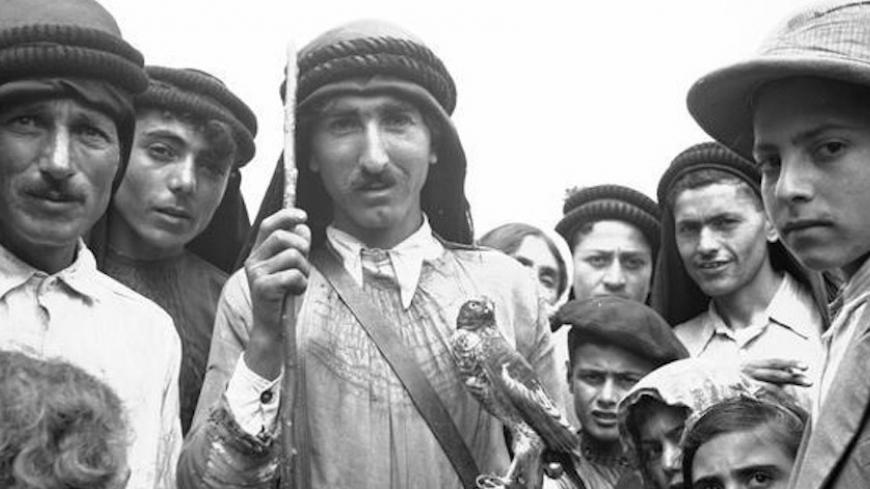 An Alawite falconer is pictured in Baniyas, Syria, between 1939 and 1945. - National Library of Australia/FRANK HURLEY

LATAKIA, Syria — As an anonymous group of self-professed Alawite leaders recently declared their independence from Syrian President Bashar al-Assad — himself an Alawite — it seems appropriate to get to know more about the somewhat obscure sect sometimes known as the third branch of Islam.

Many Alawites are unwilling to discuss their beliefs openly because their foes consider them apostates who believe Imam Ali is God. The Alawites consider these characterizations to be fabrications. Though some Alawites and Shiite scholars try to portray Alawites as Twelver Shiites, the anonymous group says Alawites are an independent, third sect of Islam who follow a mystical interpretation of the Quran.

On April 3, the anonymous Alawite group dared to issue a controversial declaration designed to "reform" and clarify Alawite identity. For example, the document calls for ending the practice of "taqiyya." (A simplified explanation of taqiyya describes it as the belief that Muslims may use deception to protect their knowledge or escape a situation in which they feel threatened.) The document emphasizes that Alawites are neither Sunni nor Shiite and rejects the tradition of the “salvation sect," under which some Muslims believe their sect is the only true way to salvation, and all other sects are apostates. According to the declaration, Alawites believe there are good people in all religions and sects.

Ahmad Adeeb Ahmad, a Syrian Alawite religious scholar, told Al-Monitor, “Faith and salvation, according to our beliefs, are not tightly linked to a sect, but to loyalty. So we acknowledge the existence of good and faithful men everywhere."

The Alawites claim to belong to the line of Imam Ali bin Abi Talib (599-661), the fourth caliph who was the cousin and son-in-law of the Prophet Muhammad.

The Alawite sect originated in Iraq and soon moved to Aleppo in Syria under the rule of Sayf al-Dawla al-Hamadani (890-1004), an Alawite who helped spread the doctrine. He followed a senior Alawite scholar, Hussein bin Hamdan al-Khusaibi (874-961), the founder of Alawi religious practice.

The Alawites were persecuted by the Umayyad, Abbasid, Mamluk and Ottoman states, which carried out massacres against the Alawites after occupying the Levant in 1516. The Alawites fled to the Latakia mountains after a large massacre in Aleppo in which thousands of them died.

Hanbali theologian Taqi ad-Din Ahmad ibn Taymiyyah (1263-1328) issued fatwas in the early 1300s deeming Shiites, Alawites, Druze and Ismailis to be apostates. The Mamluk and Ottoman authorities used these fatwas as religious justifications to kill Alawites. This persecution deeply affected Alawite society, which resorted to taqiyya in religious practice and to nationalist, leftist and secular ideologies in political and partisan work.

The April 3 declaration states, “Alawite mysticism is not a secret religious practice” but a way to divine the true nature of the miraculous secrets of creation, not to hide a religious belief.

Ahmad rejects the call to end taqiyya because Ali specifically told followers to use taqiyya to protect their religion and religious knowledge, he said. Ahmad explained that secrecy “does not mean hiding our teachings from others, but is about theological knowledge and secrets that are obtained by those who have dedicated their souls to God, who opened up to them and gave them the mystical knowledge, which they protected from falling into the hands of renegades who would distort them.”

Some Muslims accuse Alawites of deifying the imam, a charge Alawites deny. Ahmad said Ali is the guardian and Muhammad is the prophet and no one can determine the link between them. Ahmad quoted Muhammad as saying, “I am from Ali, and Ali from me.”

An Alawite scholar based in Latakia, who spoke on condition of anonymity, told Al-Monitor that while Alawites do not deify Ali, they have overstated his position due to a misunderstanding of the doctrine. Alawites' perception of Muhammad and Ali goes beyond the traditional view; they see the two as a manifestation of the creator, while all the prophets are a single person who appears at different times and the messages they reveal are several springs that originate from one source, God.

Ahmad, however, rejects the idea that the prophets are one person, saying, “The prophets in our belief are not mortals, but they are lights of God.”

Alawites share some common beliefs with Twelver Shiites (the oneness of God, justice of God, prophecy of Muhammad, divine leadership of the 12 imams and the day of judgment), and also some differences as a result of the philosophical and mystical dimensions of the Alawites.

The Alawites believe in the transcendence of God in his entirety and manifestations. Ahmad said Alawites see God expressed in the Quranic al-Noor verse: “Allah is the light of the heavens and the earth. The example of His light is like a niche within which is a lamp, the lamp is within glass, the glass as if it were a brightly shining star.”

Ahmad added that Alawites' view about Tawhid, the oneness of God, is expressed in the Quranic Ikhlas verse: “He begets not, nor is He begotten, and there is nothing at all like Him.”

The April 3 declaration said Alawites believe in the mystical interpretation of the Quran. Ahmad explained that the Alawites say, “The Quran has visible and invisible faces. We consider all of them.”

The document states that Alawites drew from other monotheistic religions such as Judaism and Christianity and that this is a source of completeness and richness for them. Ahmad, however, said that claim is “an attempt to distort the Alawite way and accuse us of introducing Israeli matters into our beliefs. This is pure fabrication. But we believe in the words of Moses, Issa [Jesus], Solomon, David and all the prophets. We cite their words and we are committed to their teachings.”

Muslims of other sects oppose the Alawites’ belief in reincarnation, saying it is contrary to Islam. But Ahmad explained, “Reincarnation does not mean a random movement of the soul between two bodies without order. It is a religious and scientific fact that we have a lot of evidence for. It is not incompatible with the principle of punishment on judgment day and it does not deny the existence of heaven and hell, because divine justice requires that no one can achieve his full self and purify himself in one life."