Some believe that Hezbollah’s approach to the Syrian conflict is tied into Shiite doctrine concerning Judgment Day. 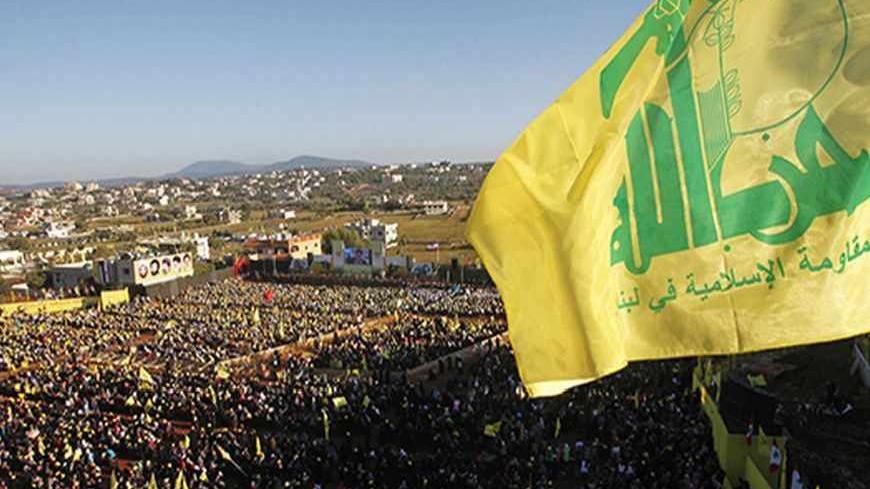 Supporters of Lebanon's Hezbollah leader Sayyed Hassan Nasrallah wave Hezbollah flags as they listen to him via a screen during a rally on the 7th anniversary of the end of Hezbollah's 2006 war with Israel, in Aita al-Shaab village in southern Lebanon, Aug. 16, 2013. - REUTERS/Ali Hashisho

A correspondent in Beirut
September 12, 2013

Knowing how Hezbollah Secretary-General Hassan Nasrallah thinks regarding the predicted military strike by Washington against the regime of his ally, Syrian President Bashar al-Assad, is a matter of concern and confusion for numerous observers in Lebanon, in the region and beyond.

There are a number of important questions that arise when considering how Nasrallah thinks. Moreover, there is an urgent need to get an idea of what Nasrallah’s answers might be.

These questions include: How will Nasrallah react to a US strike on Syria? What strategy will he retain? And according to what political, ideological and strategic approach? Will he bow down, hoping to withhold his power and save it for an upcoming round, which may target him directly? Or will he join the front to run one battle with his ally?

Nasrallah deliberately left these questions unanswered. This falls within the scope of a psychological war against Israel and the West — according to a policy of deliberate ambiguity. This time, Nasrallah did not address his popular base to declare his position regarding Washington's intention to strike Syria. He made sure not to leak — through the party’s channels and officials — any sign as to how Hezbollah will react on the military level if President Barack Obama were to carry out a strike on the Syrian regime.

According to Hezbollah sources, Nasrallah decided to leave it to the enemy to interpret his intentions, hoping that this would affect the assessment by the West and Israel of the outcomes of his reaction to the US strike on Syria. But behind this policy of deliberate ambiguity, there is an ideological aspect in his approach that interacts with the political, strategic structure of his interpretation of the current situation in Syria.

Al-Jafr, the story of the future

Nasrallah is known for being a strong believer, as well as for his confidence that the great war in the region between Iran, Syria and Hezbollah is bound to occur and that the camp he is allied with will be victorious, even if the human and material costs are quite high. Nasrallah, as well as the Iranians surrounding the leader of Islamic Revolution Ali Khamenei, rely on facts contained in a religious book to demonstrate the inevitable Great War with Israel. They believe that this mystical book, called the Al-Jafr, tells them about the future and forthcoming events. Supporters of the Shiite Islamic Revolution, in Iran and all over the world, believe that this book was written by Imam Ali ibn Abi Talib and inherited from him by Jafar al-Sadiq. It is worth mentioning that according to Shiite credence, Ali ibn Abi Talib was supposed to be the caliph following the death of Prophet Muhammad, but this never happened. Al-Jafr is a kind of science based on the knowledge of the unseen and on the science of huruf (letters of the alphabet) to predict facts that will occur in the future, leading up to Judgment Day.

Al-Jafr is a series of old symbolic events, whose interpretation explains the nature of the events that will take place before Judgment Day. According to Shiites, this day will occur with the advent of the Imam Mahdi, the Redeemer, whose arrival is awaited for by the Shiites. The Mahdi is expected to achieve justice on earth, grant victory to Islam and defeat unbelievers.

The most important matter examined by the strongest interpreters of Al-Jafr — the interpreters from among Hezbollah and Iran who deduce the meanings from words or events — is to determine the occurrence of events cited in this book, which are deemed as signs preceding the reappearance of the Mahdi after the occultation. Shiites refer to these awaited events as “signs of reappearance.”

According to Al-Jafr, the occurrence of major bloodbaths in Syria is one of the most prominent signs of reappearance. Moreover, according to the interpretation of Al-Jafr, the ruler of Syria will be killed within the scope of these events, and then the country will be ruled by a Sunni leader who will persecute Shiites, Alawites and Christians. This will continue until an army from the East (i.e. from Iran through Iraq) intervenes and kills the unjust ruler and liberates Syria. This army will keep marching toward Jerusalem to liberate it from the Jews. There, Imam Mahdi will appear to pray in Jerusalem along with the messiah. This is the scene where the earthly time comes to an end and the divine era — where justice, fairness and peace prevail — will start.

Nowadays, Iranians and Hezbollah are holding their breath, waiting for the aftermath of the US strike on Syria. They are confident that the predictions contained in Al-Jafr are coming to pass. They believe the countdown for the realization of the mystical scenario drawn in Al-Jafr has begun.

Moreover, by comparing the predictions in Al-Jafr and the sequence of events over the past two years, one may reckon that those who believe in this holy book have grown more confident in its predictions. In two years, Syria has witnessed bloody events that no one expected. After Obama’s threats to strike Syria, Al-Jafr’s predictions — that Bashar al-Assad will be killed and replaced by a Syrian Sunni leader who will retaliate against the religious sects that supported the regime, such as the Shiites, Alawites and Christians — have become more likely. All these signs indicate only one thing: the nearing appearance of Imam Mahdi.

Just as the world sees these events as political, the supporters of the Islamic Revolution in Iran view them as historical events that were cited in Al-Jafr and described as mere signs preceding the reappearance of Mahdi, according to the Shiite belief. Apart from these incidents in the Levant, these signs include the death or assassination of the Saudi king.

In this sense, the flared-up fronts and consecutive bloody events predicted by Al-Jafr seem to be in the process of fulfillment. According to Shiites who believe in this book, mainly Khamenei and Nasrallah, there is one possible explanation. The signs of reappearance of Mahdi are being successively unveiled, and the Great War with Israel and the disbelievers is just around the corner. All hopes are hanging on that nearing moment, when the victorious Shiites and Christians will stand in long lines while repeating the prayer of victory in Jerusalem following the Imam Mahdi and the messiah.

In the end, there is no doubt that the big picture represents absent beliefs, yet it also describes a reality witnessed by the Levant. It is the fear of minorities for their future and their clinging to a story of their salvation — one that might never happen for that matter. Despite that, just like a person holding on to a thread of hope, some of the region’s citizens await their salvation patiently.