Celebrating Quds Day at a particularly polarized moment in the Arab world, Hezbollah Secretary-General Hassan Nasrallah reminds his Sunni counterparts of the need for solidarity with the Palestinians. 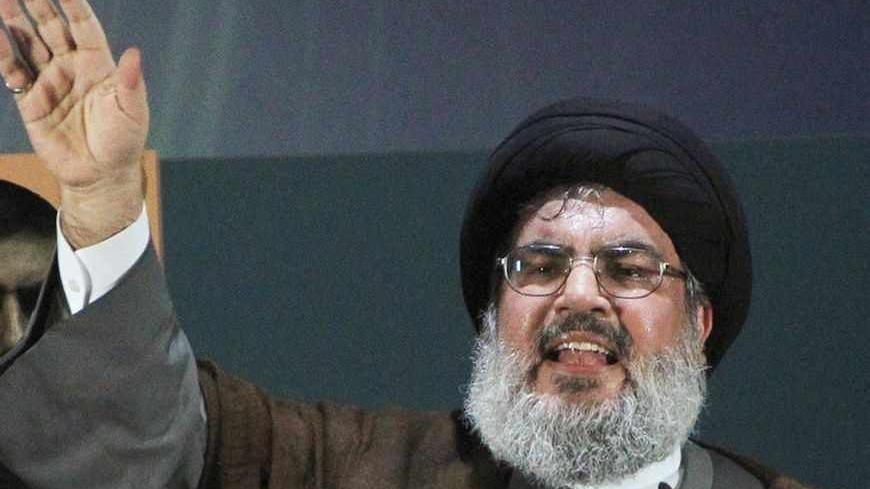 A correspondent in Beirut
August 7, 2013

The idea of celebrating Quds Day every year on the last Friday of the month of Ramadan dates back to the era of Imam Ruhollah Khomeini, the leader of the Islamic revolution in Iran. Tehran and its allies in the region believe that celebrating this day is one of the most important occasions in the Iranian agenda on the Arab scene. Over the past few decades, it became clear that solidarity with the Palestinian cause is the fastest and most guaranteed way for any party to gain the support of the Middle East’s citizens. Turkish Prime Minister Erdogan succeeded in this respect.

Erdogan’s positions in support of the Palestinian cause attracted ​​Arab Muslims to him, and caused them to mentally block out the Ottoman repression against numerous Arab peoples that lasted even after World War I. This is also the case for the Islamic Republic of Iran since the end of the 1970s until today. Immediately following the Islamic revolution’s victory, Iran lowered the Israeli flag that used to flutter on the Israeli Embassy in Tehran — which had opened during the era of the shah — and raised the Palestinian flag instead. This event was the most important Iranian passport to the hearts of hundreds of millions of Arab and Islamic peoples.

There is no doubt that the Islamic revolution in Iran exploited the Palestinian cause to increase its influence within the Arab region. It created Hezbollah in Lebanon in the early 1980s, after having supported the Fatah movement. Then it built a strategic relationship with Hamas as the Palestinian Islamic resistance. Moreover, Iran had raised its tone in its official political discourse, addressing Israel as a “cancerous tumor that must be removed.” In brief, the most important pillar of the Iranian strategy to extend its influence in the Middle East and to gain acceptability among the Arab peoples is its declaration of its extreme support for the Palestinian cause and its manifest hostility towards the Jewish state.

Hezbollah, which has achieved more than one striking achievement over the history of its continuous war with Israel for about a quarter of a century now, was deemed Iran's most prominent example of success in proving Tehran’s hostility toward Israel, and not only its verbal belligerence towards it. Moreover, it is no secret that Hezbollah is one of the most important emanations of Khomeini's Islamic Revolution in the Arab arena.

Hezbollah represents Iran’s fighting tool against Israel in the East and on the shores of the Mediterranean Sea. It is also a window through which Iran delivers to the Arab people a discourse in a language that they find appealing and whose subject is the struggle against Israel. This Iranian exploitation of the Palestinian cause was successfully maintained until after the 2006 war, during which Hezbollah, backed by Iran and Syria, endured 33 days of an Israeli global war against it. At that time, Egyptians and the peoples of the Arab Maghreb and Levant hung in their homes photos of Nasrallah, an ally of Iran, since they saw in him the new Gamal Abdel Nasser. However, the increasing number of subsequent events characterized by a sectarian conflict between Sunnis and Shiites in the Arab region undermined the persistence of this Iranian advantage. Moreover, the Arab Gulf Sunni countries intentionally made efforts to defame this advantage.

The conflict between Sunnis and Shiites on the identity of Iraq provoked the Arab street against Iran, which supported the Shiites in Iraq. Moreover, Hezbollah taking control of some of Beirut’s neighborhoods in 2008, and the expulsion of Sunni militias backed by Saudi Arabia, led the Arab circles to view Nasrallah as a mere Iranian tool whose mission was to weaken the Arab Sunnis.

On the other hand, Nasrallah’s declaration of Hezbollah’s participation in the war in Qusair alongside the Alawite regime against the armed opposition affiliated with the Sunni Muslim majority in Syria was the final blow that undermined the credibility of Iran and its ally Hezbollah as to the exclusive objective of Hezbollah, i.e., resistance against Israel. Instead they became seen as a Persian-Shiite project seeking to end the Arab-Muslim project.

It goes without saying that the campaign to portray Hezbollah and its sponsor Iran among the Arab circles as the new enemy of Arabs and Sunnis was a great success. It mainly benefited from the Iranian mistakes at this level. Moreover, the events in Syria gave it extra momentum. This is in addition to Shiitization campaigns carried out by Iran in a large number of Arab countries with Sunni majorities — such as Egypt, Libya and others.

Nowadays, in the light of the successes achieved by the project opposing it, Iran feels it must recover its role as a supporter of the Arab resistance movements and reproduce its image as a central state against Israel and not as a sectarian project or a Persian nationalist infiltration in the Sunni-majority Arab region. This is why the celebration of Quds Day was intentionally organized this year in a manner that highlights Iran and Hezbollah’s support for the Palestinian cause, which is the central cause for Arab Muslims. Moreover, this event was aimed at emphasizing Hezbollah and Iran’s commitment that their strategic goal remains unchanged, despite the recent developments and at the forefront of which is the Syrian crisis.

It is worth mentioning that Nasrallah’s speech on Quds Day included expressions portraying him as the leader of the Islamic resistance allied to Iran, since he asserted the need to take back Palestine, and most importantly its capital, Jerusalem.

Moreover, Nasrallah said in his speech that this commitment represents the position of all Shiites in the Middle East and the Arab world. This explicit discourse by Nasrallah, which for the first time had an expressly Shiite dimension, reveals the most prominent hidden objective of Iran behind the celebration of Quds Day this year: to exploit this occasion as part of its strategy aimed at recovering Iran’s standing.

It is also worth mentioning that Iran used to be well received in the Arab world and is now met with resentment, after being accused of Shiite discrimination against Arab Sunnis. Within the scope of this important mission, Nasrallah did not spare any means to draw political and media attention during the celebration of Quds Day in Beirut. The most prominent tool he resorted to was his appearance in person during the celebration, because since the 2006 war he has typically addressed his audience via giant screens in order to avoid assassination by Israel.

During the past seven years, Nasrallah rarely gave public speeches. Public appearances only occurred on select occasions, as required by his party to deliver specific messages. Nowadays it seems that Nasrallah realizes that this period requires his personal appearance. This is what he did when he surprised the crowds in the hall where Quds Day was being celebrated, by appearing in front of them and addressing them face to face. This conferred more glamour to the celebration of Quds Day and ensured wider media coverage. This was an intentional move by Hezbollah, who seeks to make Quds Day events a successful platform from which it will spread its most important message to millions of Arab Sunni citizens. This message is that the Shiites are not religiously biased and that they support Muslims causes in the region and, in particular, the Palestinian cause.

On the other hand, the most important message that Iran wanted to convey through Nasrallah — the leader of the Islamic Resistance in Lebanon, which is a political party currently working on mending its relationship with Hamas regardless of their dispute over the Syrian crisis — is addressed to Washington, which has been attempting to solve the Palestinian issue without involving Iran. The message is, “We will sabotage this attempt.”

All of the above messages were repeatedly insinuated by Nasrallah in his speech when he said, "Palestine includes all of Palestine, from the sea to the river, and it must be fully returned to its people and its rightful owners. No one in this world may give up a grain of its sand and no one is authorized to do so.” Nasrallah also said, “Allow me this time to talk in a Shiite language. We are currently witnessing a lot of sectarian incitement toward Shiites and this is intentional. I say this to everyone, we the Shiites of Ali bin Abi Talib, we will not abandon Palestine.”